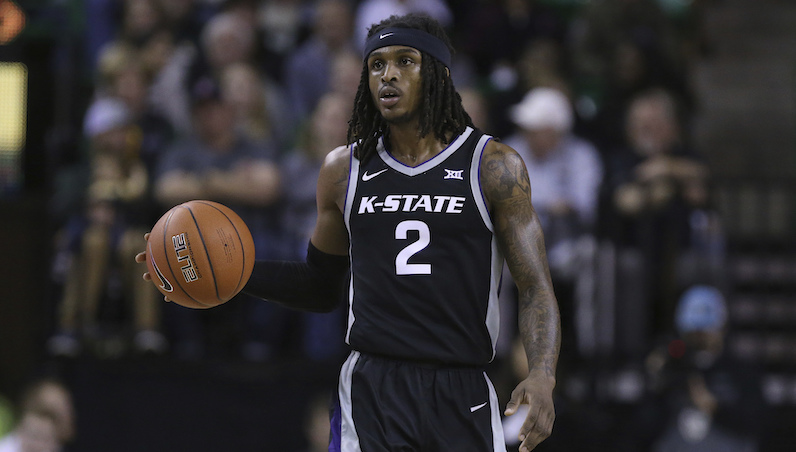 Cartier Diarra joins Virginia Tech as one of the more intriguing newcomers to the ACC. The Kansas State transfer initially flirted with testing the NBA Draft waters; however, Diarra elected to not apply as an early-entrant for the 2020 draft.

With that, Diarra, will now have the keys to a quirky — and potentially explosive — offense at Virginia Tech. There several talented offensive pieces in the fold, too. Sophomores Jalen Cone and Hunter Cattoor return as dangerous movement shooters in Mike Young’s offense. Tyrece Radford, one of the most rugged undersized finishers in Division I, will also feature heavily into the mix.

Even with Landers Nolley headed to Memphis, there’s a lot to like here, especially on the offensive end. This is why Diarra is such a critical element, though. Now in the ACC, can Diarra lift an offense up to something beyond the some of its parts?

Young’s highly-choreographed offense features a variety of signature components. Near the top of the list is its ball movement. When the Hokies move the ball, it’s more than window dressing. Virginia Tech leverages floor spacing, detailed off-ball patterns and screening actions to generate open looks; crisp ball movement is paramount to ensure the offense’s flow.

During the 2019-20 season, the Hokies assisted on 59.5 percent of their made field goals, an assist rate that ranked 16th nationally. This marked the fourth time in the last five seasons that a Young offense assisted on at least 56.5 percent of its field goals. In three of those years, Young’s team ranked inside the top 30 in assist rate.

According to Synergy Sports, 9.6 percent of Virginia Tech’s possessions last season were finished with an off-screen play type — easily the highest rate in the ACC. (No surprise: Virginia was second at 7.7 percent.)

This is where Cone can really become an offensive fire-starter; as a freshman, he scored 1.11 points per possession coming off screens.

Virginia Tech’s 229 off-screen possessions were the 10th most in the country. The Hokies averaged 6.8 off-screen points per game — tops in the ACC by nearly 2.5 points per contest.

The Hokies finished the season with a 3-point attempt rate of 47.7 percent, which was good for 13th nationally, second highest among high-major programs. Only Nate Oats, Kira Lewis and go-go Alabama ranked ahead of VT.

(Virginia Tech, with another year under its belt, should get even more comfortable in Young’s system. More comfort should result in improved timing and shot creation. This is another potential internal growth avenue for the Hokies.)

As nice as all of this intricate half-court offense is — and really, it’s great — top offensive teams still need bucket-getters. Guys and gals that can attack and break a defense down when all of the pretty off-ball movement and screening gets stymied by a stingy defense.

For the most part, that role belonged to Nolley this season. Only a redshirt freshman, Nolley had his moments, but his efficiency slipped over the back-half of the season.

By the end of the of the year, Nolley had an offensive BPM of just 1.0 and an offensive rating under 90. Going back to the 2007-08 season, Nolley is just the second ACC player to post an effective shooting rate under 45 percent with a usage rate of at least 32 percent.

Nolley scored 0.77 points per isolation possession this season (37.1 eFG%), according to Synergy. That’s not too bad, although over the final 15 games he shot under 28 percent on iso attempts. (The vast majority of Nolley’s offense came from spot-up possessions: 215.)

In terms of isolation efficiency, Diarra was similar this season to Nolley, with less volume: 0.79 points per possession (39.3 eFG%).

Diarra can really look for his own shot when he wants to. With the ability to go north-south and attack off the dribble, Diarra forces defenders to content with a variety of options.

When opponents go under screens in the pick-and-roll, he’s will to let it fly. In one-on-one situations, however, Diarra will occasionally light defenders up with a nasty step-back jumper. Diarra can get this shot off from a variety of launch points, including those from close quarters.

This level of off-dribble shooting is a new element for Young to work with at Virginia Tech. The Hokies have a way, when all else fails, to generate a possession that could net close to one point per possession.

Usage: Up, Up And Away

During his junior season, Diara made significant strides as a shot-creator. With the departures of program stalwarts Dean Wade, Barry Brown and Kamau Stokes, Diarra was thrust into a different role. As the primary creator, his responsibilities grew exponentially.

Back in the 2018-19 season, when K-State won 25 games (No. 20 in KenPom): Wade, Brown and Stokes all posted usage rates of 20+ percent and assist rates of 18+ percent. Bottom line: the offense ran through the three seniors.

Playing on the basketball more, Diarra’s assist numbers jumped, too. Diarra dished out 5.4 assists per 40 minutes, double the amount from his sophomore season. He finished with an assist rate of 32.6 percent, which ranked 47th nationally.

Diarra was one of 11 players in high-major college basketball this season with 25 percent usage and 30 percent assist rate.

In the debut season of Young in Blacksburg, the Hokies were forced to shift play-making responsibilities, too. After four years of running the show at VT, Justin Robinson left. With Robinson injured for a portion of the 2018-19 season, Nickeil Alexander-Walker and Kerry Blackshear Jr. emerged as the clever initiators of Virginia Tech’s half-court offense.

Bede is an excellent defender — with a career defensive BPM of 2.7. He’s also a perfectly fine offensive glue guy: a decent spot-up shooter and ball-mover. However, he was asked — along with Nolley — to create offense for Virginia Tech.

At the controls of Tech’s offense, Bede usage rate jumped from 11.2 percent to 16.6 percent. After posting a sub-17 percent assist rate across his first two seasons, Bede’s assist rate leapt to 35 percent — No. 29 in the nation. In that capacity, his efficiency slid: 41.4 percent effective shooting (22.2 3P%).

This, however, is where Diarra really helps fill a need: primary initiator.

Diarra’s handle is a little high and loose, but he’s crafty — loopy crossovers and behind-the-back dribbles to create space.

Compare those totals to Bede who, on 49 off-dribble jump shot attempts, scored 0.53 points per possession (26.5 eFG%). Nolley attempted 92 off-dribble jumpers, per Synergy, with an effective shooting rate of 38 percent.

The off-ball movement and screening principles of Young’s offense are its foundation. However, when things breakdown, Diarra offers a potential flotation device to save the possession.

Over his first two seasons in Manhattan, Diarra was an excellent spot-up weapon. In each of those seasons, he ranked in the 85th percentile or better nationally in catch-and-shoot efficiency.

As a freshman and sophomore, close to 35 percent of Diarra’s 328 field goal attempts were catch-and-shoot looks. He sizzled on those looks, too, with an effective shooting rate above 62 percent. In the 2017-18 season, Diarra finished 12th in the Big 12 in catch-and-shoot efficiency — among other stars like Trae Young, Devonte Graham, Jarrett Culver, Desmond Bane and Kenrich Williams.

Despite the struggles, Diarra still stepped into shots with confidence — off movement, off hand-offs. He showcased plenty of range, too.

At this point, it’s tough to forecast shooting percentages, but playing in Young’s system should generate some juicy spot-up looks for Diarra.

Working in combinations with gravity shooters, like Cone and Cattoor, will help. The same can be said for Radford, another lefty, who can collapse defenses with his basket drives and cuts. And with Bede’s ability to handle, too, Diarra should be able to downshift and play off the ball as well.

(On the defensive side of the floor, Diarra and Bede should make for a frisky duo, too. Diarra posted a steal rate of 3.5 percent this season.)

When opponents hard closeout on Diarra, the lefty has flashed the ability to drive it with either hand. Diarra shot just under 62 percent at the rim this season. Over 90 percent of Diarra’s rim finishes were unassisted.

When Diarra steps on the floor at 6-foot-4, he usually has a size advantage at the point guard position. This allows him the ability to see over the top of his defender. At times, Diarra’s passing vision really pops, including this gorgeous lob over 6-foot-2 Devon Dotson of Kansas, a soon-to-be NBA point guard.

Diarra can break a defender down, with or without a screen. His fearless ability to get a foot or two in the paint and look opposite makes more an interesting slash-and-kick creator.

Cone and Cattoor both posted effective shooting rates over 62 percent on spot-up no-dribble jumpers this season. They should be frothing at the mouth to spot-up around Diarra drives.

Kansas State scored 0.91 points per possession (49.3 eFG%) this season when Diarra passed out of the pick-and-roll to someone that finished the action: shot, turnover or shooting foul.

With all of Virginia Tech’s spacing, that number should go over the one point per possession threshold. Simply reducing turnovers would help, which should be a part of Diarra’s development (24% TOV rate career).

Veteran center P.J. Horne returns as a useful pick-and-pop option as well. Under Young, Horne transformed his game — moving out beyond the 3-point arc. According to Synergy, Horne scored 1.26 points per possession on pick-and-pops (No. 16 nationally).

Horne’s shooting helps open the floor up for Radord to slash and attack. Virginia Tech can throw out some really nifty small-ball lineups next season.

After starting the 2019-20 season with a 12-4 record, including an upset of Michigan State, Virginia Tech looked like an overachieving darling. However, life in the ACC can prove to be humbling. Virginia Tech mirrored itself over the final 16 games — a 4-12 record as the offense slumped.

Cartier Diarra is imperfect and he’s just one player. But his addition to next season’s roster is significant.