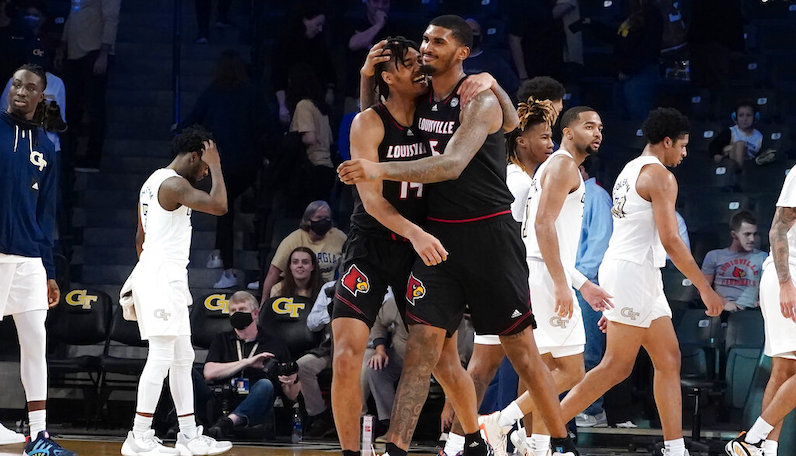 After two full weeks off, Duke returns to action at home vs. Georgia Tech (Jan. 4).

UNC had one of its top offensive games all season in a blowout win over Boston College: 1.26 points per possession, 11-of-23 3PA.

The Cards continue to get it done on the defensive side of the floor; led by Malik Williams, Louisville (3-0 ACC) held Georgia Tech to 0.98 points per possession in a 3-point victory.

With the Miami Hurricanes out to a 3-0 start in league play, All-ACC combo guard Isaiah Wong continues to affirm has status as one of the top bucket-getters in the country.

According to Synergy Sports, Wong is scoring 1.11 points per pick-and-roll possession this season, so far.

The Hokies are a very good offensive team; every player in the rotation is a threat to score and Mike Young is terrific in terms of scheme/play design. However, Virginia Tech doesn’t attempt a crazy high volume of 3s: 38.9 percent of VT’s field goal attempts come from beyond the arc (No. 158).

It feels like there’s still more to tap into here.

During the loss at Miami, Wake Forest had its worst defensive performance of the season: 1.29 points per possession. The Hurricanes got what they wanted in the half-court offense, including a variety of looks out of their screen-roll action.

Wake Forest centers Dallas Walton and Khadim Sy frequently hedged vs. Miami’s pick-and-roll. Various Miami ball handlers exploited this and found teammates rolling to the rim or kick the ball around to second or third side options.

No. 7 Tie: Florida State and Clemson

FSU lineups with Malik Osborne as the team’s center have been a useful tool this season, especially in the win over NC State.

During the NC State matchup, Florida State outscored the Wolfpack by 12 points in 21 minutes with Osborne at the 5.

No. 9 Tie: Notre Dame and Virginia

After a rocky start to his senior year, point guard Prentiss Hubb has been on a bit of a roll lately. Over the last three games, Hubb has averaged 11.7 points per contest, while shooting 9-of-15 3PA.

First ACC win of the season for the Irish. pic.twitter.com/A3z2xJWhgy

Hubb also drilled the game-winning shot for Notre Dame to escape Pittsburgh with a road win.

Kihei Clark had one of his best games of the season as Virginia snagged a road win over Syracuse: 17 points (3-of-5 3PA) and eight assists.

Took over down the stretch. #GoHoos 🔷⚔️🔶🏀

A Tale of Two Sides of the Floor: Syracuse is a damn good team on offense, but the Orange are having all kinds of issues with the defensive side of the floor.

As usual, the zone is getting crushed on the glass (33.5 percent opponent offensive rebound rate) and Syracuse’s defensive turnover rate is down, too: 18.7 percent.

NC State is in the middle of a five-game losing streak, with many of these defeats coming in tight games. The margins just aren’t very big for the Wolfpack, who struggle on defense and are overly-reliant on Dereon Seabron to generate rim pressure for the offense.

Freshman guard Terquavion Smith continues to be a bright spot, though. During the FSU game, Smith pumped in 23 points and drained a career-best seven 3-pointers.

Once again struggling to create efficient offense, the Yellow Jackets haven’t won back-to-back games since November and have yet to beat a team this season that ranks inside KenPom’s top 140 in terms of adjusted efficiency margin.

According to KenPom, Boston College currently ranks outside the top 140 nationally in both offensive and defensive efficiency.

That 16-point win over Notre Dame in early December is starting to look more and more perplexing.

Unsurprisingly, Pittsburgh is one of the worst offensive teams — in terms of high-major programs. Outside of second-chance opportunities and getting to the free throw line, there’s no real reliable way for Pitt to search out points.