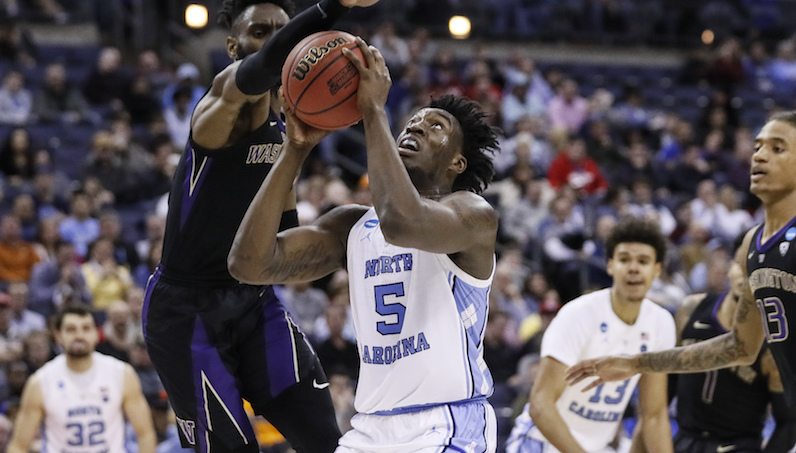 As multiple media folks out in Kansas City have tweeted out, North Carolina freshman forward Nassir Little — suffering from flu-like symptoms — will not practice with the team on Thursday. According to head coach Roy Williams, there’s “no way” Little could play today if UNC was in action on Thursday.

Nassir Little (flulike illness) stayed back at the team hotel today and didn't accompany UNC to the Sprint Center here in Kansas City for practice and interviews ahead of Friday night's date in the Sweet 16.

However, in the first two rounds of the NCAA Tournament, Little’s play seemed to hit another notch, especially against Washington’s zone — working the slot and hitting the glass: 19.5 points (71 FG%) and 5.5 rebounds per game.

Carolina at 1.24 PPP with an OR% of 52.0. As usual, they are carving up an opposing zone, this time with Maye and Little doing the damage in the middle of the zone. Little's been showing great touch on his floater in Columbus—a great complement to his elite finishing at the rim.

Who could step up?

If Nassir Little were to actually miss the game, North Carolina’s rotation would be without a key piece: the sixth man and top frontcourt reserve. He’s likely UNC’s most-versatile athlete, too. However, if Roy Williams needed to readjust his bench, he has options. Those options start with Brandon Robinson.

Robinson is one of the league’s more fun player development stories in the 2018-19 season; it’s obvious he put a lot of work in over the 2018 offseason. The junior wing has reduced his turnover rate (1.7 per 40 minutes) and focused on catching and shooting from deep.

When Robinson has subbed in for Kenny Williams and played with North Carolina’s other four starters — Coby White, Cameron Johnson, Luke Maye and Garrison Brooks — the Heels have been rather good.

Using @FreeportKid's data, Robinson w/4 starters is +66.5 in 13 minutes of action this season

BRob's contributions continue to be important on both ends of the floor pic.twitter.com/15nYKayIMx

After attempting 53 3-pointers across his first two seasons (71 games, 30.2 3P%), Robinson has splashed 21-of-46 3-point attempts this year (45.7 3P%). Over 58 percent of Robinson’s attempts from the floor this season have come from beyond the arc, and all but four of his 3-pointers have been assisted on, too.

And when Robinson subs for Johnson and plays with the other four starters, North Carolina has found some success as well. It certainly helps that Maye and Johnson can both play up or down a position — like Little. That helps North Carolina’s positional flexibility.

According to Synergy Sports, Robinson has scored 1.22 points per possession (61.7 eFG%) on spot-ups this season.

What about Manley and Black?

As enjoyable as Robinson’s success has been this season, it’s been equally frustrating for sophomore big Sterling Manley, who simply hasn’t been able to get right in terms of his health.

Manley didn’t play a single minute of basketball during a game for all of January and February. However, over the last few weeks, he’s gotten up and down the court a few times: five games, eight minutes of action.

That’s not much, obviously, but it’s better than nothing. In a pinch without Little, could he be called upon to help — at least for a few possessions?

Leaky Black, on the other hand, missed the entire month of February after a nasty-looking (high) ankle injury at Georgia Tech. Black reappeared in the rotation for March Madness — playing a total of 10 minutes against Iona and Washington.

Save for grabbing a couple of rebounds, he didn’t do too much in those limited minutes; however, when he’s right, Black is a super-appealing two-way wing prospect who can do a little bit of everything.