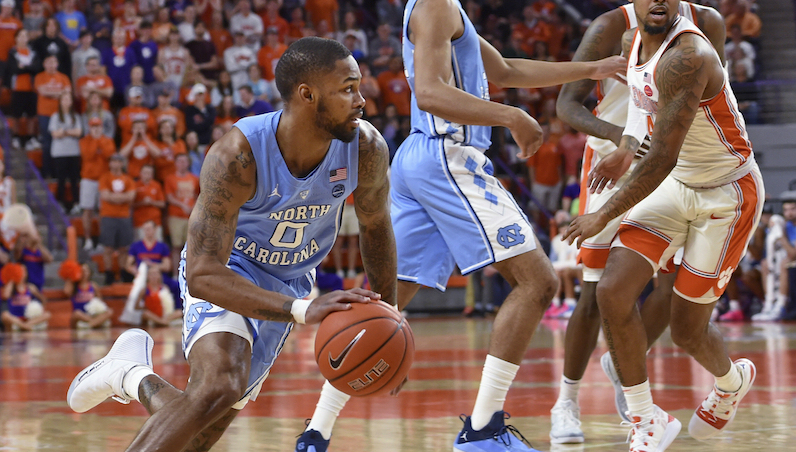 North Carolina's Seventh Woods drives to the paint during the first half of an NCAA college basketball game against Clemson Saturday, March 2, 2019, in Clemson, S.C. (AP Photo/Richard Shiro)

After three seasons with North Carolina Basketball, junior point guard Seventh Woods has announced his decision to transfer out of the program. During his time in Chapel Hill, Woods appeared in 94 games, making one start; he was a member of the 2017 national championship team, too. Woods made the announcement on his Instagram page.

UNC junior guard Seventh Woods says on his IG that it's time to make a change and go elsewhere. Story to come soon.

Woods was a prep star — both a YouTube sensation during his high schools days and a top-50 prospect. However, the product of South Carolina never saw significant minutes during his time at UNC. Over the course of three seasons, Woods logged 815 minutes; he scored 167 points (1.8 points per game) and handed out 140 assists (1.5 assists per game).

Injuries played a role in Woods struggling to crack a major rotation role; so, too, did playing behind some great players, like Joel Berry and Coby White.

And while he had his moments, Woods also struggled with taking care of the ball and his jump shot. (Woods even spent time splitting backcourt minutes with Jalek Felton, before he withdrew from school.)

Writing on the wall?

Minutes could’ve been tough to come by for Woods next season, especially playing behind a stud like Anthony — who requires playing time and possessions.

With Seventh Woods departure, next season is shaping up for quite the decline in minutes continuity and experience

Prior to his commitment to North Carolina, Woods received offers from a number of power conference programs, like NC State, South Carolina and Georgetown.