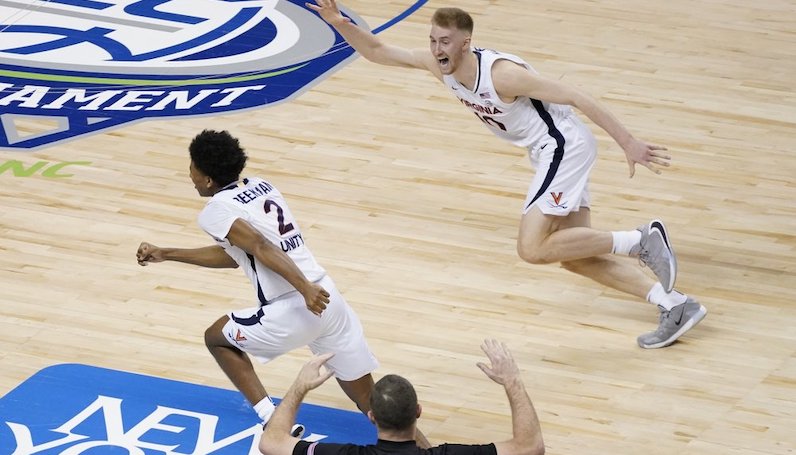 Virginia’s buzzer-beating win over Syracuse at the 2021 ACC Tournament will be remembered for how it ended. As the clock expired, freshman guard Reece Beekman splashed an open 3-pointer to give Virginia a walk-off victory, 72-69.

The jumper from Beekman — off a wonderful find from Kihei Clark — ended the game and completely reversed Virginia’s fortunes over the previous two minutes of basketball.

Following a timeout with 1:55 left to play, Jim Boeheim pushed Syracuse into a full-court press defense. Down six points at the time, Syracuse ripped off an 8-2 run, which tied the game, 69-69.

Beekman entered the quarterfinals of the ACC Tournament just 8-of-31 on 3-point attempts (25.8 3P%). During the postseason matchup with Syracuse, Beekman actually missed his first three 3-point looks, too. However, the uber-talented freshman drained the one that mattered most.

Before Beekman’s game-winner, though, Virginia had to fight its way back into this game; Syracuse was frisky all afternoon, fueled by the shooting of Buddy Boeheim. Beekman was the primary cover on Boeheim (31 points, 5-of-8 3PA), but the 6-foot-6 junior wing used his height advantage to routinely bomb over the top of the rookie guard, a phenomenal chase defender.

Here’s a quick look at one of the ways Virginia attacked Syracuse’s zone, along with some of the other ways Beekman impacted this game.

There are a variety of methods for teams to try against a 2-3 zone defense. Offenses can try to screen the top of the zone to create some downhill penetration. Baseline screening actions can help initiate a diagonal lob pass. Flare screens are a useful tactic as well for shooters. Teams can also try to overload one side, and work off that advantage.

However, the most obvious tactic is to flash someone to the zone’s soft spot — right at the nail. Offenses can then enter the ball to this player at the free throw line and attack.

While Virginia runs plenty of normal flash action like this, Tony Bennett has a few other tricks up his sleeve.

During the 2018-19 title season, Virginia had one of its most efficient offensive performances at Syracuse. UVA scored 1.33 points per possession in a 26-point beatdown of the Orange. Amazingly, Virginia assisted on 75 percent of its total field goals, too.

One of the ways Virginia dismantled the Syracuse zone was to have Ty Jerome go to the nail, catch an entry pass and dribble back. This movement — along with Virginia’s wide flooring spacing — allowed Jerome to isolate in the middle against the central back-line defender of the zone, Paschal Chukwu.

As always, Jordan Sperber did an excellent highlighting this adjustment at the time, which Virginia used earlier in the season vs. Syracuse as well.

Virginia's 2nd half adjustment last night to put Jerome in the high post and dribble Chukwu out to the perimeter: pic.twitter.com/CNZFNPksVX

The closest facsimile on this year’s roster to Jerome is probably Sam Hauser — another dynamic movement shooter. Hauser has moments of occasional court vision, kicking passes to the second side of the floor for open jumpers. (Of course, he’s not the same type of live-dribble playmaker as Jerome.)

As Bennett has deployed this concept again vs. Syracuse this season, though, it’s been with Jay Huff as the high-post passing tower.

Syracuse: Who to choose?

Obviously, Huff isn’t a gifted ball handler like Jerome. That said, he still manages to stress opposing defenses with his pick-and-pop gravity and passing.

The ability to pick-and-pop and put defenses into rotations goes away with the zone; however, Huff can be used as a passing fulcrum in the middle of the floor.

Look how Virginia spaces the court around Huff. That forces Marek Dolezaj out of his comfort zone, which is precisely what UVA wants.

Huff has several options here. The 7-footer can look to face-up and shoot or drive. Huff can spray passes out to shooters. Or Huff can look to pick out an open cutter — moving into the space left by the displaced Dolezaj.

Trey Murphy III is one of the top off-ball cutters in the country; he’s a real difference-maker roaming the baseline.

During this season, Huff has found Murphy for backdoor targets on pick-and-pops, baseline-out-of-bounds plays and this 2-3 zone concept.

When these two teams first met this season in Charlottesville (Jan. 25), this maneuver was used a handful of times.

ACC Tournament: Back at it again

After shuffling a variety of different bodies into the soft spot of the zone, UVA was able to isolate Huff in the middle of the floor vs. Dolezaj.

Virginia put together some good half-court offense with this same zone adjustment. This time, however, Huff was used as a passer.

Over the span of about 90 seconds, Huff and Hauser connected for two cut layups out of this look. The second cut layup came off a really nice feed by Huff. It also gave Virginia a small lead in a back-and-forth game.

Kicking it on the corner

As good as Beekman’s game-winner was, he left his fingerprints on several elements of this game. In fact, Beekman’s work as a passer vs. the zone was pivotal.

Beekman tossed out four assists; all three of Hauser’s 3-pointers came via the rookie combo guard.

Along with his individual and team defense, what makes Beekman such a special prospect is his first step. Beekman is liquid quick; he glides all over the floor. At times, it seems as if he needs no space to build force for his drives.

It’s just an easy catch-and-go as he slides by Alan Griffin and snaps a pass to Hauser.

This wasn’t the only time Beekman left Griffin eating his dust, though. Later in the game, Beekman attacked another Griffin closeout with ease. This drive didn’t result in a kick to the opposite corner, where Murphy was stationed. Instead, Beekman wheeled back and hit Hauser — moving into the space Beekman just evacuated — for another triple.

With Syracuse largely ignoring him as a non-shooter, Beekman did wonders moving without the ball, probing the middle of the zone and kicking back out for 3-pointers.

Even if Beekman didn’t directly assist on a 3-ball, his activity bent Syracuse’s defense. With the Orange rotating around, UVA was able to find a good look on the next pass.

On this possession, Beekman gets the hockey assist — with Clark redirecting the ball to Murphy.

Virginia advances to the semifinals of the ACC Tournament. The ‘Hoos will play the winner of Georgia Tech on Friday (6:30 p.m. tip).