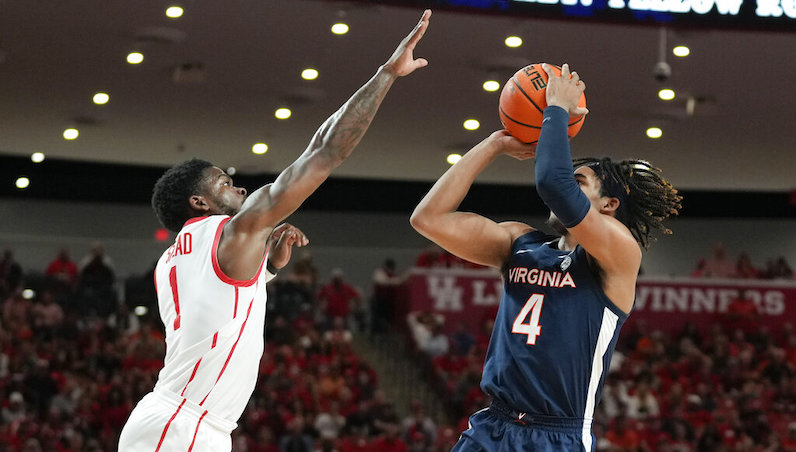 With Virginia off to 2-2 start, Tony Bennett’s offense has looked as sluggish as feared heading into the season.

The Cavaliers have scored under 0.95 points per possession in two of the first three games, including a road matchup with Houston, one of the elite defensive programs in the country. Houston held Virginia to 0.80 points per possession: 39.5 percent effective shooting and a turnover rate of 29 percent. Yikes.

Overall, the offense lacks movement shooting, which makes for tough sledding within the Blocker-Mover concepts. As a team, Virginia is shooting under 31 percent on 3-point attempts; when Armaan Franklin (26.1 3P%) isn’t hitting, it’s hard to feel too confident in this team’s ability to bend and warp defenses with those off-ball screening patterns.

Despite the struggles, the half-court action hasn’t been all bad. Gardner has had issues finishing on the low block this season (25 FG% on post-ups per Synergy), but he’s passed well vs. double teams and has found some points on post-up looks out of Blocker-Mover.

As usual, the speedy Reece Beekman has shown his ability to be a playmaker when coming off a pindown screen, looking to drive and pass. Beekman does a beautiful job fading this down screen from Gardner when the Radford defender tries to cheat over the top.

Unfortunately, these moments of individual artistry have been covered up by too money pockets of gridlock on offense.

One of the interesting aspects of Virginia’s shooting struggles centers on how poorly they’ve shot the ball while coming off screens. UVA has scored 1.13 points per spot-up possession (57.7 eFG%) this season, which is pretty darn good. (It’s also a small sample at this point, so the hot-shooting win over Radford has a lot of influence here.)

However, it’s the off-movement attempts that are proving to be an issue, so far. This is what can happen when you lose a player like Sam Hauser — a superb movement shooter — and don’t have an ideal replacement. Again, Franklin helps, but he’s not on the same level.

According to Synergy Sports, Virginia has scored 0.62 points per off-screen possession (33.9 eFG%), while shooting 29 percent.

It warms my heart to see that Bennett has turned the keys over to Beekman as the team’s primary initiator; however, the personnel really isn’t there to squeeze the most out of this scenario. With non-shooters at the 4 and 5 positions (Jay Huff is missed), it’s hard for Virginia to properly space the floor around screen-roll action.

Virginia can try to run “spread” pick-and-roll with Beekman and Gardner, but Gardner doesn’t threaten as a stretch-4. Complicating matters, one of the centers is always in the dunker spot — allowing another big defender to hang around the rim and muck things up.

If Gardner can work 1-on-1 in space and in the post — while going downhill — he’s tough to stop. These types of looks have been hard to find, though.

Virginia ball handlers have shot a combined 26.7 percent out of the pick-and-roll this season. Bennett has tried to juice some of these lineups by playing Kody Stattmann or Taine Murray at the 4, but it’s not enough.

Beekman has been incredible on defense to start the year, unsurprisingly. His offense, however, has been a little more of a mixed bag.

On some possessions, you see the framework of what Beekman optimists envision: mixing speeds, getting into the paint, using his eyes to move/manipulate defenders and finding open teammates.

Opponents have a playbook to defend Beekman, though. Defenders will go under on ball screens, unafraid of his pull-up 3-pointer.

Virginia will try to counter that by having the screener flip and re-screen for Beekman, which allows him to get deeper in the paint. This has led to other challenges, however.

Opposing defenses will also look to shade and push Beekman to his left hand — where he’s looked less confident. When he gets pushed left, Beekman has a tendency to pick up his dribble, thus slowing the possession down, or to quickly pass it to a teammate.

Passing out of these actions is mostly fine, but when it happens earlier in the possession, the opportunity cost is Beekman (with a live dribble) looking to probe and attack a defense.

That quick-pass approach can work, too, like this Beekman-Kadin Shedrick connection from Virginia’s inside motion/triangle offense. Taking what the defenses allows is basic basketball. However, it’d be nice to see Beekman dial up the aggression as a driver.

Virginia may need to get a little more creative on offense, too. Play smaller. Look to run more frequently, before an opponent get set its half-court defense. Make it easier for Beekman to get downhill. Mix in some Spain pick-and-roll.

The Cavaliers add some more off-ball movement to their spread pick-and-roll looks for Beekman vs. Houston, for instance.

UVA can play better and cut down on the turnovers, but it’s a risk to hope for the best, while leaning too heavily on Blocker-Mover and middle pick-and-roll as the competition increases.