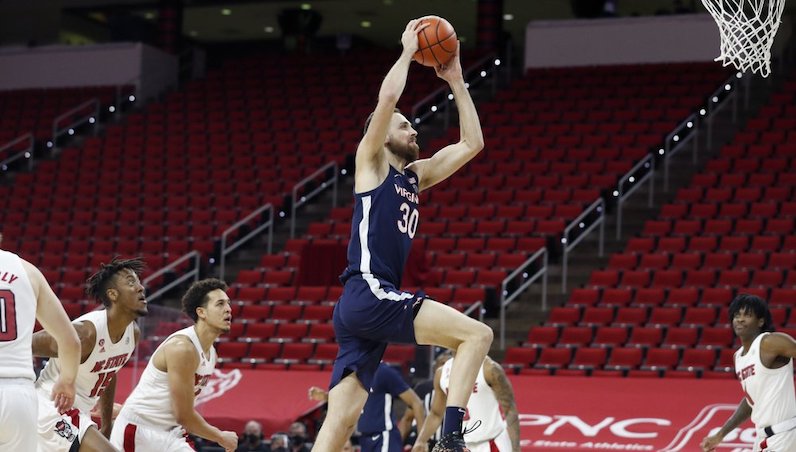 There are several players with reasonably compelling cases for ACC Player of the Year, but at the midpoint of league play, Virginia’s Jay Huff tops that leaderboard. Huff is the most impactful player on the ACC’s best team; he’s shooting 45.5 percent on his 3-point attempts and 70.1 percent on 2-point looks (32 dunks). The 7-footer ranks top 15 nationally in both block rate (11.8 percent) and true shooting percentage (71.5 TS%).

The “Hoo-nicorn” pieces may have seemed mockable to outsiders back in 2017 or 2019; however, those early assessments of Huff’s skills package were accurate. Huff is now a legit stretch-5: capable of protecting the rim and scoring from every level of the floor, though he prefers the money areas (beyond the arc and at the rim).

Huff has improved each and every year in Charlottesville, both as an offensive playmaker (he can attack closeouts and pass out of the high post) and as a pick-and-roll defender.

Once upon a time, it was tough to justify extended minutes for Huff when it meant sacrificing something on the defensive end; Jack Salt and Mamadi Diakite offered more versatility guarding ball screens. Now, however, Virginia’s defense needs Huff on the floor to thrive. (Virginia mixes up its ball screen coverages, using some of the traditional Pack Line approaches, while also allowing Huff to drop and deter things in the paint.)

Virginia has outscored opponents by 152 points in the 357 minutes Huff’s played this season, per Pivot Analysis, in part because of his rim protection. With Huff on the court, UVA opponents are shooting under 43 percent at the rim. That number balloons to 59.5 percent at the rim when Huff sits.

Focusing on the micro, though: Virginia weathered a second-half deficit on the road Wednesday night against a desperate NC State team, playing without its top perimeter talent — Devon Daniels. In terms of shooting, Huff didn’t have his best game; he missed all but one of his six 3-point attempts. However, even on nights when he shoots below his averages, Huff is still a threat. The win over NC State is Exhibit A.

No matter how he’s shooting, opponents must step out and guard him; Huff posses gravity 23+ feet away from the basket. If you leave him open, he can either bomb 3-pointers right on top of you, or use that airspace to pick out passing angles and look for cutters. Either way, opposing defenses must lock in on Huff’s location, at all times.

On the flip side: if opposing big men defenders fail closeout properly closeout on Huff — out of control as they scramble to contest a potential 3-point opportunity — he can put it on the floor and finish. Huff is shooting over 82 percent at the rim this season — with 50 percent of his rim finishes coming unassisted.

Attacking closeouts is nothing new for Huff; he’s had that in his game for a while now. During his redshirt sophomore season — at Duke, for instance — Huff could shot fake, put the ball on the deck once or twice and attack on a straight line.

There’s now more variety on these catch-and-go maneuvers, though. Huff has little spins and shot fakes to keep defenders off balance.

If multiple defenders converge, Huff can simple kick the ball out to an army of perimeter snipers that dot the arc for Tony Bennett.

Huff is averaging 2.0 assists per 40 minutes this season — a slight, yet noticeable jump over his career average.

Adding to the challenges of guarding Huff 20-some feet from the basket: he can shoot on the move. Like, it’s already a big ask to need your center to guard pick-and-pops against a 7-foot closeout-beater who shoots 45 percent from downtown. However, asking a center to chase his assignment around pindowns is a whole other ballgame. That’s not really what these guys signed up for: just ask Anthony Davis and Mason Plumlee.

This is what made Virginia’s transition to the inside motion offense such a success during the team’s recent seven-game win streak. Huff isn’t a statue shooter; he can move around, too.

It’s really tough to defend off-ball actions when Sam Hauser and Huff — two very tall, very accurate shooters — start running around and screening for one another. When the ball starts popping around, someone is bound to break free for a jumper or back-cut layup.

Following the loss at Virginia Tech, Bennett altered Virginia’s offensive mix for NC State. The Hoos ran only a handful of those inside motion/inside triangle possessions, which had dominated UVA’s offense over the previous five weeks.

During a long stretch of the first half, and parts of the second, UVA used (what I believe is called) a Floppy Chase set. This was done primarily to set up empty-side pick-and-roll.

However, when Virginia needed a bucket, especially as things got tight late in the second half, the Cavaliers simplified things and went spread pick-and-pop with Huff. (Even with D.J. Funderburk recovering and closing out, along with a hard weak-side stunt from Thomas Allen, Huff can still just shoot over the top with his length.)

Again, this was the only 3-point make Huff had at NC State, mere miles away from his hometown of Durham. That said, the pick-and-pop with Huff proved pivotal because of the secondary actions it created all over a spread half-court for UVA.

Virginia created chaos for NC State’s defense by adding in weak-side off-ball movements — playing off the 3-point gravity of Huff.

Keep an eye on Reece Beekman here. While Kihei Clark probes off the high ball screen with Huff, dragging Manny Bates down into the paint, Huff remains at the top of the key. Clark picks up his dribble and spins to look for Huff. As he does this, though, Cam Hayes stunts in the direction of Huff; that’s textbook weak-side screen-roll defense. However, Bennett and Beekman counter this with what’s called a 45-degree cut.

With Trey Murphy occupying the corner, Beekman slices behind Hayes and in front of Allen — on a 45-degree angle — for an easy layup. Hayes wants to buy his big man some time to recover back to Huff on the pop, but that leaves open a gap to the hoop.

Here’s the same look: another 45 cut from Beekman — this time with Hauser receiving a pass for an open 3-point attempt.

Now is when the fun really starts, though: Jay Huff picking out cutters from above the 3-point arc. Following that 45 cut, Virginia ran a second (delayed) cutter from the same side — one second later, out of the corner. This was usually Murphy, who finished with three dunks against the Wolfpack.

Here are three looks of Murphy cutting out of the corner behind the 45 cuts from Beekman and Hauser; two of these possessions produced dunks for Murphy over the final four minutes of the game, effectively closing things out for UVA.

NC State’s help defense just wasn’t ready to handle so many second-side actions; this proved problematic as UVA assisted on 63 percent of its field goals.

Huff finished the NC State game with three assists, which is two off from tying a season-high five dimes he tossed out against Clemson.

Virginia generated backdoor action against an aggressive Clemson defense with 5-out looks and some off-ball split action — a slightly different approach than the NC State victory.

To switch, or not to switch

Virginia added another wrinkle to this pick-and-pop/45-degree cut concept, which involved pindown action between Hauser and Murphy.

From the first half: as Beekman cuts through on the 45, Hauser (from the opposite corner) runs the baseline in the direction of Murphy. NC State, which switches the vast majority of 1-4 off-ball actions, has both Bates and Funderburk on the floor together. This puts Funderburk — the team’s nominal 4 — in a tough spot as a chase defender.

This specific setting is a little unnatural for Funderburk; he’s a good athlete and can be a plus-defender, but it’s hard to sprint around screens and remember certain defensive assignments when you’re on high alert.

In theory, switching should make stuff easier: if you see a screen, just switch it. Simple, right? Well, Hauser, is an elite movement shooter; he’s deadly coming off screens. If you’re guarding Hauser, you must be aware of his movements at all times: don’t let this dude get open, no matter what.

That’s why Murphy’s screen and slip to the basket is such a wonderful counter to NC State’s switching. Dereon Seabron and Funderburk don’t communicate here; before you can blink, Huff whips a pass and it’s two points for UVA.

Here’s that same look again — on the first play of the second half. This time, though, Jericole Hellems and Seabron hit the switch, which requires UVA to look for offense on the other side of the floor.

Hellems, Hayes and Allen do a really nice job on this next possession switching across multiple off-ball actions. However, good offense will beat good defense, and Huff’s able to isolate vs. Bates, an excellent defender, for a Frank Kaminsky-esque spinning layup.

On the very next possession: NC State does a nice job covering everything up. But UVA flips the action and runs spread pick-and-roll — with Huff dive-bombing to the cup for a lob. Hayes is actually in decent position here to tag Huff. The rookie guard isn’t super physical with the larger Huff, but maybe he gets just enough to throw off the timing of another boom from Huff.

Bennett and Virginia will utilize Huff as a backdoor passing hub in special situations, too. With under two minutes to play at NC State, and Virginia clinging to a six-point lead, Bennett called an after timeout (ATO) sideline out-of-bounds (SLOB) play that involved Huff receiving the inbounds pass, faking a handoff with the inbounds passer (Beekman) and flicking a backdoor pass to a cutter out of the near corner (Clark).

Central to the success of this play is Huff’s ability to pressure the defense into thinking he’ll run a dribble handoff (DHO) with Clark. That’s where Huff’s gravity come into play, again. When Clark’s defender — Bates, after a switch — leans in the direction of Huff’s, Clark dashes backdoor, with the weak side occupied by Hauser and Murphy, two spot-up aces.

If this ATO looks familiar to you, well, that’s because it’s not the first time Bennett has gone to it. From the matchup at Louisville last February, it’s another ATO call. Clark is the inbounds passer this time, while Tomas Woldetensae is the cutter. Braxton Key and Diakite are spaced to the weak side; however, Diakite sets a flare for Key, which brings both Jordan Nwora and Dwayne Sutton away from the hoop.

It will be a real challenge to prepare for Virginia’s offense over the final weeks of this season. The talent and shooting are so, so good. The team continues to change up its approaches on offense; there are a variety of actions and sets to study and learn. Along with all of that, this is another item that must go on the scouting report: Virginia will look to backdoor you with Huff as a passer.