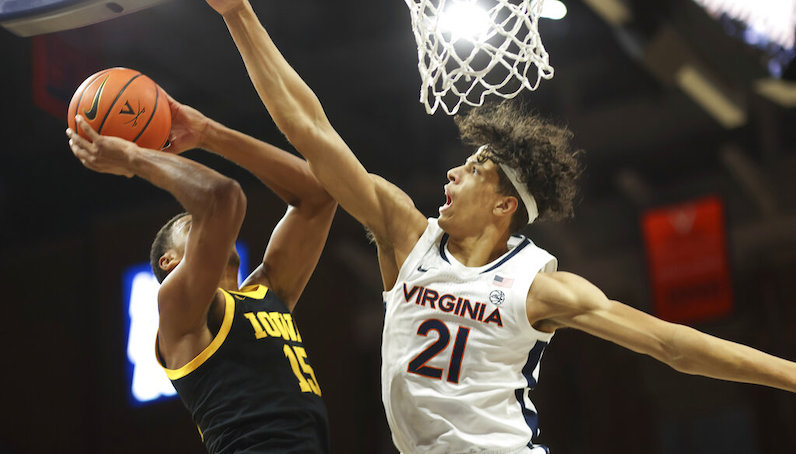 It was natural to have some concerns for the center position as Virginia headed into this season. As Jay Huff left for the NBA, the program would turn the role over to Kadin Shedrick, a third-year sophomore and a relatively unproven player.

The calendar has yet to flip to December, and the start to the season has been a little uneasy for the ‘Hoos. Now, with eight games under his belt as the starter, Shedrick is showing his potential, while also further solidifying Virginia’s rep as a strong player-development program.

Shedrick showed flashes in a limited role as a redshirt freshman; with his height and mobility, the two-way optionality was obvious, even if it was mostly a glimmer. However, it seems logical that the 6-foot-11 center would like to forget the 2020-21 season. Shedrick dealt with mononucleosis, which caused him to drop down to 198 pounds. Shortly after the season ended, Shedrick also contracted COVID-19. So, not exactly ideal.

Over a long offseason, though, Shedrick added weight back on — 25 pounds — as he prepared to become the man in the middle for Virginia. Shedrick doesn’t offer the stretch potential of Huff, although did attempt one ill-advised 3-ball in the loss at Houston.

Shedrick does, however, bring a similar level of rim protection to the floor. This is a nice display of defense from Shedrick: presenting himself to hedge vs. a potential ball screen, then recovering to the paint and absolutely deleting this flailing attempt from Jared Bynum.

Currently, Shedrick ranks No. 3 nationally in block rate: 17.9 percent. For Shedrick, this translates to 5.5 blocks per 40 minutes, which is a ridiculous number.

Shedrick is a force as a weak-side rim protector. His instincts and defensive ground coverages really stand out; there’s a clear sense of when to go get the ball.

If he continues to do stuff like this, then opponents will have to adjust and be mindful of his presence as a rim deterrent at all times.

Of course, like any young shot blocker, Shedrick (who is also getting used to playing at his new-ish size), has a tendency to commits fouls. According to KenPom, Shedrick is averaging 5.5 fouls committed per 40 minutes this season.

When backup center Francisco Caffaro plays and Shedrick sits, Virginia is -12 in 114 minutes, per Pivot Analysis. (When those two have played together, UVA is +11 in 10 minutes, although that pairing seems like an offensive liability in most matchups.)

It’s early in the season; we should be careful to not make wholesale judgements based off of a small sample. With that said, Virginia has been markedly better with Shedrick on the floor this season — both offense and defense.

Here’s Reece Beekman curling and hitting off a pindown from Shedrick in Virginia’s blocker-mover offense.

According to Pivot Analysis, Virginia’s offense has scored 113.7 points per 100 possessions this season with Shedrick in the game. That’s an encouraging number for a team that has obvious limitations on offense.

Defensively, well, it’s more of the same. Thanks in part to Shedrick’s rim protection, Virginia’s defense has allowed only 89.4 points per 100 possessions with the redshirt sophomore on the floor. This includes an opponent effective shooting rate of just 44.1 percent.

With Shedrick on the bench, Virginia opponents have scored 107.4 points per 100 possessions.

At this point of his career, Shedrick isn’t quite there as a post-up target, which is perfectly fine. That can come later. For now, though, Shedrick should stay focused on hitting the glass for second-chance opportunities and diving to the hoop as a screener. (If you buy Shedrick long-term as possible NBA prospect, this is what matters most on offense, too.)

One of the key concepts of the Blocker-Mover is the empty-side pindown, which can open the floor up for a rack attack.

If the player running off the pindown curls hard and draws help from the screener’s defender, then there’s a window to look for the screener rolling to the rim.

(Of course, if the chase defender cheats over the top of the screen, then the off-ball runner should fade to the corner and look for a catch-and-shoot 3.)

So far, Shedrick is shooting 60 percent at the rim this season — with most of his rim field goals coming on dunks.

The 6-foot-11 center leads Virginia with seven slams. Some of those finishes have come from hanging around the dunker spot and working as a cutter. However, Shedrick seems quite adept at looking for his own offense with this pindown-and-dive action.

This is a valuable and necessary tool to pair with Beekman, Kihei Clark and Armaan Franklin. So far, Shedrick has drawn 4.5 fouls per 40 minutes this season, second most on the roster, behind Gardner (5.5).

Tony Bennett has started to experiment — more and more — with lineups that feature Gardner as the team’s de facto center. This was something I mentioned last week as a possible remedy for some of Virginia’s half-court concerns.

Virginia's dabbled with some Jayden Gardner at 5 in recent games — Coppin State, UGA: +11 in 12 mins. Intrigued by some of the lineup combos with Igor Milicic, helps space the floor around Gardner on the block. Gardner's been good picking up loose change: cuts, put-back, duck-ins

Virginia augments these lineups with a couple of stretch options at the forward spots: Taine Murray (who went nuts in the second half vs. Iowa), Igor Milicic and veteran Kody Stattmann.

The Cavaliers are +13 in 28 minutes and have scored 1.11 points per possession with Gardner at the 5, per Pivot Analysis.

Gardner can use this setup to roll to the basket and carve out space on the block — with less defensive attention on his back.

When a double team arrives, Gardner has shown he’s capable of making a savvy pass, too. Gardner can pass on the short roll and out of the post.

Gardner and Beekman (and Franklin) have been used as occasional switch partners on defense as well. These small-ball fixtures offer a little additional 1-5 switch potential, in a pinch.

Obviously, the more Bennett is able to get from guys like Murray and Milicic, the more frontcourt versatility Virginia brings to the table. Gardner is the lone true 4 on the roster; when he sits, Virginia could get more stretch on the floor with Murray, spotting up around Beekman-Shedrick pick-and-rolls.

Alternatively, Gardner stepped out and hit two 3-pointers vs. Iowa, while in at the 4. He now has 11 career 3-pointers, dating back to his time at East Carolina. This is something to monitor as a possible bellwether for Virginia. If Gardner shows more comfort from deep, and is willing to attempt one or two per game, then it could help the half-court spacing in Virginia’s base lineups.