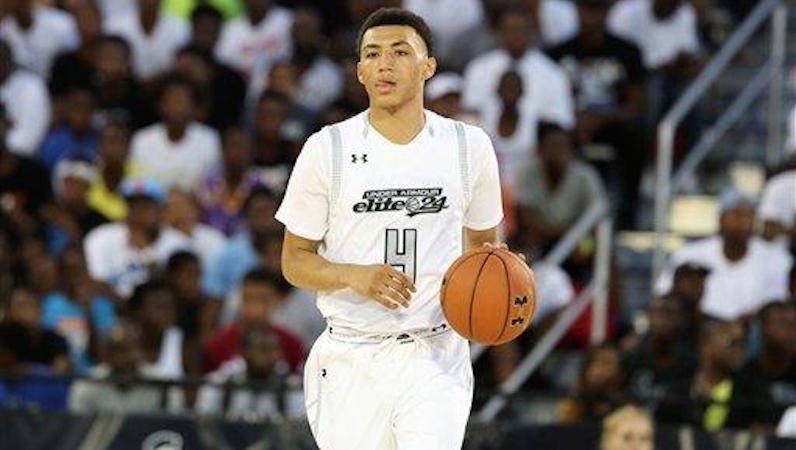 Jahvon Quinerly is a top five points guard in the 2018 class, per 247Sports. (AP Sports)

Despite being linked to several players ranked in the top 100, more than a few even in the top 50, the Virginia basketball program has yet to land a commitment for the class 2018.

That might be at least in part because the Cavaliers, as well as programs across the country, are waiting on a decision from Jahvon Quinerly.

The New Jersey product is one of the top 15 players in the nation and considered one of the top few point guards in a class considered loaded with future pros at the position. Virginia — just like Arizona, Villanova, Seton Hall, UCLA, Kansas and so many others — is keeping a spot available for Quinerly. But recruiting is often a domino effect, and until Quinerly tips not much is happening with several other top guards.

To some degree, this is new territory for the Cavs. Four years ranked in the Top 25, week in and week out, has put Virginia on a different level recruiting. UVA has the ability to now pursue a whole host of McDonald’s All-American types.

But point guard, and by extension Quinerly, seems to be a priority for Tony Bennett and his staff for 2018. But the competition is quite stiff. Villanova at one time appeared to be the leader, but now Arizona looks like a strong contender. Additionally, Seton Hall has the advantage of being a rising program close to home.

However, Virginia has been in the mix for a long time; Quinerly appears to continue to seriously consider the Cavaliers. Patience will be required, though.

One door closes, another could open

Of course, Bennett and the Cavaliers are also carefully addressing backup plans in case Quinerly goes elsewhere, too.

Recently the Cavaliers extended scholarship offers to A.J. Green, a four-star point guard out of Iowa, and Will Richardson, a four-star shooting guard from Georgia. Both players have had break out summers and risen to become solid top 100 prospects.

Virginia has plenty of scholarships available after signing only two players in 2017, so even landing a point guard such as Green wouldn’t necessarily mean the Cavs have given up on Quinerly.

But the time may be coming where Virginia is better off taking the good players who are ready to make a decision.

Quinerly remains the top target, and a player who could take the Hoos’ talent to another level. Players often recruit each other; certain swing men and post players could be compelled to join a top-notch point guard in Charlottesville.

The path for Perrantes to get to the NBA