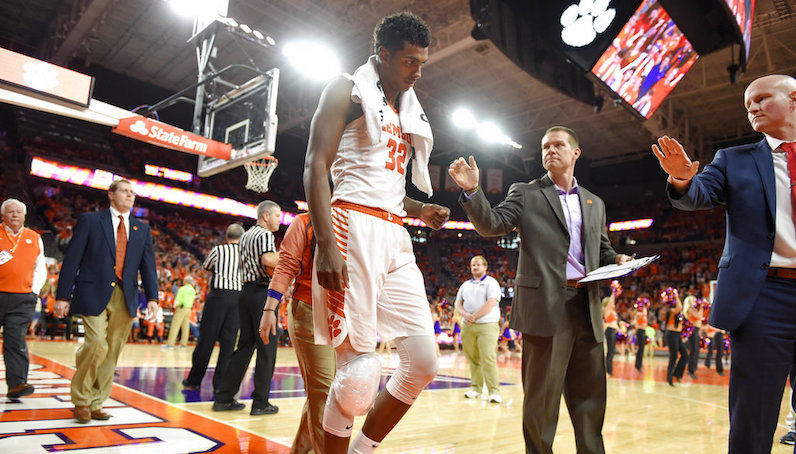 Clemson's Donte Grantham walks off of the court after being injured during the second half of an NCAA college basketball game against Notre Dame Saturday, Jan. 20, 2018, in Clemson, S.C. Clemson won 67-58. (AP Photo/Richard Shiro)

News trickled out early Sunday afternoon that confirmed the worries of Clemson basketball; senior forward Donte Grantham did, in fact, tear his ACL against Notre Dame. The senior, who is in the midst of a career year, will miss the rest of the season. This is the worst-case scenario.

Grantham, who flirted with entering the NBA Draft after the 2016-17, is robbed of the final half of his college career, which would’ve likely ended in the NCAA Tournament. That’s a tremendous bummer. Here’s what Clemson will miss without Grantham on the floor.

What do you do without your best player?

No matter how you slice it, Donte Grantham is Clemson’s best player — an all-around talent with over 110 games of college experience. This season, Grantham moved full-time to the power forward spot, and held the position down perfectly.

Clemson is 16-3 overall and 5-2 in the ACC; the Tigers rank inside the top 35 nationally in both offensive and defensive efficiency, per KenPom. Brad Brownell’s club is on pace to get back to the NCAA Tournament for the first time since 2011.

Grantham’s greatly improved shooting stroke — 41.9 percent on three-pointers — and rebounding presence — 18 percent defensive rebound rate — opened up Clemson’s offense. The Tigers could roll out a three-guard offense with Shelton Mitchell, Marcquise Reed and Gabe DeVoe, and not have to worry about sacrificing too much on the defensive glass.

Plus, Grantham’s ability to space the floor meant Clemson could open the lane for Elijah Thomas — one of the ACC’s top post-up players. Grantham has scored 1.09 points per possession on catch-and-shoot attempts this season, per Synergy Sports. That’s better than Joel Berry, Rex Pflueger and Braxton Beverly.

The closer, the better

As prolific as Elijah Thomas is around the basket, it’s been tough for him to stay on the floor. According to KenPom, Thomas averages 4.7 fouls per 40 minutes. Due to foul concerns, the southpaw from Texas plays a smidgen over 24 minutes per game.

When Thomas hit the bench, Clemson could maintain offensive balance by subbing in grad transfer Mark Donnal, who can spread the floor, and letting Donte Grantham take over at the rim.

Grantham is a gifted cutter, who can finish efficiently at the rim. According to Synergy, Grantham is shooting 72.7 percent and has scored 1.52 points per possession on non-post-up attempts at the basket. That ranks 34th nationally and fifth in the ACC — slightly ahead of Duke’s generational talent Marvin Bagley.

Over the last five games, Donte Grantham has played 76 percent of Clemson’s minutes at the power forward position, per KenPom. He also has a usage rate slightly above 20 percent, which is relatively high, too.

Other players to get time at the 4 spot: David Skara and freshman Aamir Simms. The offensive decline is significant. In 329 combined minutes, Skara and Simms are a combined 25-of-57 (43.9 percent) from the field for a total of 64 points.

It’s probably asking too much to expect Skara or Simms to replace more than a small portion of Grantham’s offensive footprint.

The Tigers will have to hope that the backcourt trio can continue to produce; Reed, Mitchell and DeVoe average a combined 40 points per game. That has to increase while also remaining efficient. Additionally, Thomas may have to play closer to 30 minutes per game.