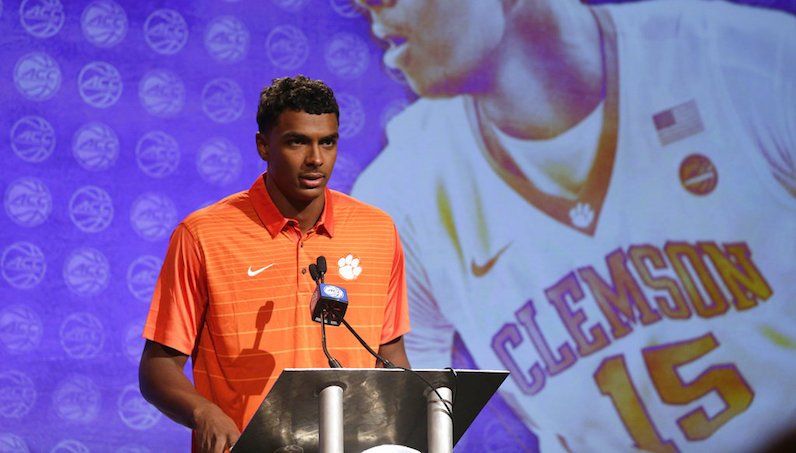 Clemson is off to a fast start to the 2017-18 season; the team’s only defeat came at the hands of Temple, a KenPom top-50 team, in the Charleston Classic championship game. Coach Brad Brownell is attempting to get the Tigers back to the NCAA Tournament for the first time since 2011.

To do so, Brownell is playing a fairly limited rotation. Graduate transfer Mark Donnal leads the team in terms of bench minutes — only 14.4 per game. The upperclassmen starters have played the majority of the minutes for the Tigers, and they have played rather well, too — none better, though, than senior forward Donte Grantham.

According to KenPom, Grantham ranks No. 21 in Division I basketball in terms of true shooting rate — 80.9 percent.

Grantham has splashed 50 percent of his three-pointers — 10-of-20. The senior is averaging four three-point attempts per game, which is a career high; however, he’s shooting triples at a lower rate than previous seasons. Less than 43 percent of Grantham’s attempts are of the three-point variety.

That’s still a healthy margin of chucks from the perimeter, but Granthan is really getting things done from the paint.

Donte Grantham is shooting a ridiculous 85.2 percent on two-point field goals this season — a top-40 number nationally. He’s accomplished this by absolutely doing work on his high-percentage looks: transition and cuts.

Grantham has been especially efficient on basket cuts; he’s 8-of-9 on field goal attempts (88.9 percent) after a basket cut, per Synergy. On non-post-up possessions around the hoop, Grantham has scored 1.94 points per possession — No. 3 in the nation — on 15-of-16 (93.8 percent) shooting.

Over the summer, we looked into why Grantham was poised to experience a big senior season. So far, so good. Without Jaron Blossomgame, Grantham gets plenty of touches (a career-best usage rate of 21.3 percent) playing with a fantastic offensive backcourt — Shelton Mitchell, Marcquise Reed — and one of the league’s top low-post hubs, Elijah Thomas.

What’s on the line for the ACC with Miami vs. Clemson?