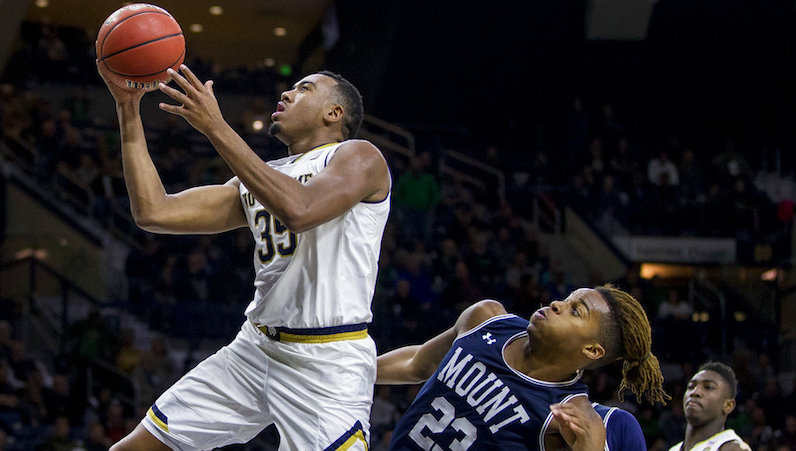 There is a lot of stuff that factors into the offensive profile of Bonzie Colson. The 6-foot-5 senior is the best player in the ACC, for a variety of reasons — most have to do with an offensive game that blends versatility with efficiency.

Colson can stretch defenses out to the three-point line; he can also face-up and splash 18-footers. The bread and butter of his game, though, is his ability to cut, rim-run and post-up. This is why Colson is the perfect central hub for Notre Dame’s spacey four-out offense.

The All-ACC forward utlizes a near-7-foot wingspan and a soft touch in the paint; however, part of his efficiency in the paint centers on his ability to avoid turnovers. That’s a testament to more than just individual brilliance of Colson, though. It also reflects the space he gets to enjoy surrounded by a roster of skilled passers and shooters.

Amongst players with at least 100 possessions, Colson ranked No. 26 in the Division I basketball last season in terms of offensive efficiency on post-ups — 1.023 points per possession, 50 percent shooting, per Synergy Sports. Wake Forest’s John Collins was the only ACC player that ranked ahead of Colson: 1.024 points per possession.

According to Synergy, there were 200 Division I players last season that used at least 100 post-up possessions in 2016-17 — eight from the ACC. Out of all of those players, Colson ranked No. 1 in terms of turnover rate on post-ups — 7.5 percent.

So far, that has kept up this season: Colson is yet to record a turnover out of a post-up, according to Synergy. If a player never turns the ball over, and makes half of his shots, do the math: you have a hyper-efficient scorer on your hands.

Colson takes care of the ball outside of the post, too, though. According to Sport Reference, he has a career turnover rate of only 8.3 percent. In 2016-17, Colson became just the third ACC player since the 2009-10 season to have a usage rate of at least 25 percent and a turnover rate under eight percent. This means he’s scoring a lot and getting the the free throw line, too.

Again, it helps that Bonzie Colson plays with really good talent: Matt Farrell, Temple Gibbs and Rex Pflueger. This is also why some coaches love spacing the floor with an abundance of shooters; post players like Colson have more room to operate at the basket. Colson is less worried about a wing defender stunting down and going for a steal than, say, Ben Lammers at Georgia Tech.

Mike Brey on joining the ACC: “It’s been such a shot in the arm”