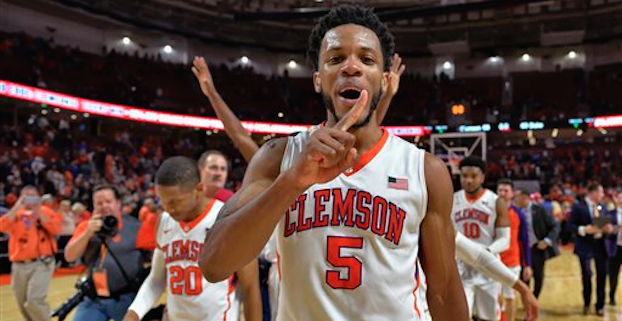 Jaron Blossomgame could be the best player in the ACC this season. (AP Photo).

There’s more than one Georgia native starring for Clemson athletics at the moment; Deshaun Watson is the cover boy for the ACC right now, but Jaron Blossomgame has the ability to not only be the best player in the ACC next season, but to also go in the first round of the 2017 NBA Draft. This certainly didn’t happen over night. If you’ve been paying attention, Blossomgame has been a productive player for some time now, but his game has truly rounded into form.

Blossomgame was the breakout star of the 2015-16 ACC basketball season; after two stellar years in orange and purple, the Georgia native put everything together during his junior season. A year after receiving zero votes for All-ACC consideration, Blossomgame became one of the five best players in the conference, and was named to first team All-ACC.

It was the way in which Blossomgame dominated that should have Clemson fans and NBA scouts excited for what the future holds, though. Blossomgame upped usage (he used nearly 27 percent of Clemson’s possessions while on the floor last season, seventh most in the ACC), but managed to become much more efficient player, which is really impressive.

To read more on what makes Jaron Blossomgame such an intriguing draft prospect, sign up for basic access to ACCSports.com.