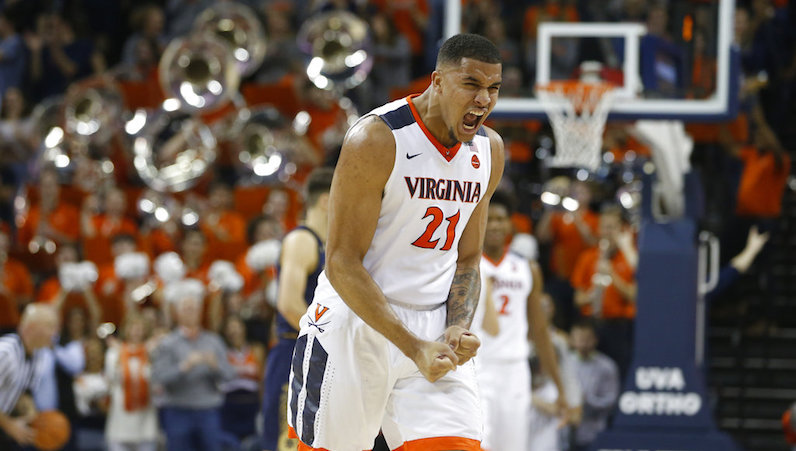 On Sunday, Virginia’s Isaiah Wilkins was named ACC Defensive Player of the Year. Unless you have lived under a rock the last four months, this is no surprise. Wilkins, who received 42 of 57 possible votes for the award, has quarterbacked one of the best defenses in ACC history.

Of course, Wilkins is not the only Cavalier to recently win this award; Darion Atkins claimed the honor back in 2015; a year later, Malcolm Brogdon, the reigning NBA Rookie of the Year, was also named ACC Defensive Player of the Year.

So it’s clear: Tony Bennett’s system is fierce; however, the players that make up the unit aren’t merely cogs. They are standouts, too.

Isaiah Wilkins and Malcolm Brogdon are different players, obviously, tasked with different responsibilities in Virginia’s defense. But I thought it’d be fun to see how the two most recent Cavaliers to win the league’s top defensive honor stacked up.

One of the things that makes Isaiah Wilkins so special is his ability to block shots and take the ball away from opponents. This season, Wilkins averaged 1.5 blocks and 1.2 steals, but we know it goes further than that, right? According to Sports Reference, Wilkins posted a steal rate of 2.9 percent and a block rate of 7.3 percent.

This means nearly three percent of opponent possessions end with a Wilkins steal when the senior was on the floor this season.

Wilkins is one of only five ACC players to have both a steal rate of at least two percent and a block rate (percent of opponent two-point field goal attempts block by a player) of over five percent this season. Three of those guys — Wilkins, Anas Mahmoud and Ben Lammers — were named All-Defense in the ACC. A fourth, Ray Spalding, should’ve been named to that roster, too.

This is the second time in his career that Wilkins has hit these benchmarks, too. Dating back to the 2009-10 season, only two other Cavs have also accomplished this — Darion Atkins and Justin Anderson.

In his senior season at UVA, Brogdon posted a steal rate of 1.8 percent and a block rate of 0.9 percent.

Let’s go a step further, though, shall we: How did Isaiah Wilkins and Malcolm Brogdon excel when it came to defending spot-ups, jump shots and isolation possessions?

Again, it’s important to remember here that Wilkins and Brogdon are defending different types of players and possessions. Brogdon, a perimeter defender, is more likely to cover guards/wings, who are more likely to be better shooters — which could produce a higher effective shooting number.

Wilkins is one of only three Division I players with a defensive rating under 82 points per 100 possessions, according to Sports Reference.

These numbers only tell part of the story, but there’s value here, and it speaks to just how darn good Isaiah Wilkins was for UVA. A case can easily be made that Wilkins, the lynchpin of the nation’s No. 1 defense, is the best defender from Tony Bennett’s time in Charlottesville.

Can Kyle Guy maintain his All-ACC level of play with an MCL sprain?