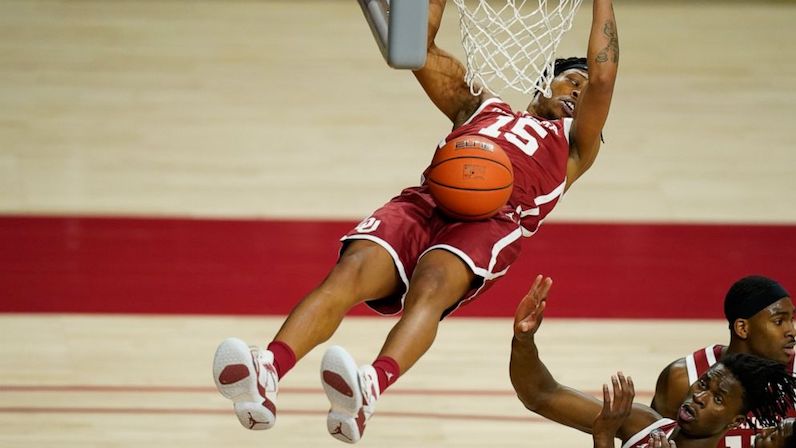 Alondes Williams isn’t the biggest name to enter or leave the ACC via the transfer portal this offseason. However, the addition of Williams to Wake Forest could prove valuable for Steve Forbes.

The 2020-21 season was a challenging one for the Demon Deacons. When Forbes arrived in Winston-Salem, he was met with all of the normal difficulties that come with a coaching change at a struggling program. Obviously, though, all of those concerns were heightened during the COVID-19 pandemic, which ravaged the program.

Still, the focus for Wake Forest needs to be on process, not results. The wins were never going to be there. Minus an offensive fulcrum (Olivier Sarr) and a healthy veteran initiator, Wake Forest had to lean in with its new offensive system. Wake Forest utilized both motion sets and pick-and-roll looks that featured some form of pre-screen activity. The results were interesting.

Wake Forest finished the season ranked 22nd nationally in 3-point attempt volume: 46 percent of the team’s attempts came from beyond the arc. That’s easily the highest rate from any Forbes-coached team. (I’m fascinated to see where this number lands in the 2021-22 season.) From within the ACC: only Boston College — 46.1 percent — posted a higher rate.

According to Bart Torvik’s shot data, only 29 percent of Wake Forest’s field goal attempts were close 2-point attempts — near or around the basket. This ranked 312th nationally. The Demon Deacons shot just 53.8 percent on those looks as well: No. 307 in Division I.

This is where Williams can make a difference, though.

While his box score stats don’t jump off the page — 6.7 points, 2.8 rebounds and 1.3 assists per game — Williams possesses the ability to get north-south with the basketball.

Gliding by two-way wing Jared Butler is no easy task. A 6-foot-5, 200-pound wing, Williams is solidly built and hungry to put pressure on the rim. Over 61 percent of Williams’ field goal attempts were close 2-point attempts last season, per Torvik’s data.

Williams is a reluctant 3-point shooter, which plays a role here, but this is still a really big number.

Overall, Williams shot 61.4 percent at the rim this season and 62.3 percent on those same looks as a freshman. During the 2020-21 season, nearly 60 percent of his rim finishes came unassisted, too. (Williams drew 3.4 fouls per 40 minutes as a freshman, according to KenPom.)

Williams did all of this while playing against some of the best college talent in the country this season in the Big 12. Watch Williams put future first round pick Kai Jones (a 6-foot-11 wing, essentially) in the spin cycle here.

On this possession, Williams gets fouled and completely displaces Greg Brown, 6-foot-9, 205-pound forward and another likely first round pick from Texas.

Once again, Whitt and Williamson will be tasked with initiation responsibilities. This is why Whitt’s development is one of more intriguing offseason storylines in the ACC; Wake Forest needs a jump. While working alongside those two, Williams should provide a reliable source of secondary playmaking as well.

Oklahoma’s offense primarily ran through Austin Reeves and De’Vion Harmon, who will team up with Syracuse transfer Quincy Guerrier next season at Oregon. But Lon Kruger also gave the ball to Williams in an effort to kickstart offense.

The sample is on the smaller side, but when Williams passed out of the pick-and-roll this season, OU scored 1.11 points per possession, according to Synergy Sports.

Williams has the ability to come off a little zipper cut, flow into middle pick-and-roll, get in the paint and make reads. He can either drop it to the big in the dunker spot or kick it out for a spot-up look. Williams recorded an assist rate of 12.8 percent over two seasons with OU, which is solid.

With Williams on the floor this season, Oklahoma (+72 in 440 minutes) posted a net rating of 9.9 points per 100 possessions, according to Pivot Analysis.

When Williams was on the court, 46 percent of Oklahoma’s field goal attempts originated from around the rim, per Pivot Analysis. The Sooners shot 64 percent on those looks, too.

With Williams on the bench, though, only 41 percent of Oklahoma’s attempts came at the basket. OU shot just 52 percent on those attempts, another steep drop.

This isn’t to say that Williams will cure all that ails Wake Forest’s offense. Williams played for a prominent team in a high-major conference; he isn’t some hidden, under-the-radar analytics darling, either. Although he did grade fairly well in Evan Miya’s BPR metric: top 50 in the Big 12 (600+ possessions).

However, he brings a skill set that should help in an area where the Demon Deacons are weak. This is a savvy way to use the transfer portal: satisfy a team need with a readymade player. For instance: North Carolina did the same thing with the addition of Brady Manek, a former teammate of Williams at OU. UNC needed a stretch big man; that’s exactly the service Manek provides.

Williams also provides some encouraging lineup flexibility. Going back to his time at East Tennessee State, Forbes has displayed a willingness to play smaller. These lineups often feature more of a do-it-all wing as the de facto 4. Williams and Damari Monsanto, who transferred in this offseason from ETSU, could fulfill that role, hypothetically.

This would also allow Wake Forest to dot the floor with multiple playmakers. There are some interesting lineup combinations that could feature Whitt, Williamson, Williams and Monsanto together.

The more Wake Forest can free up Monsanto (35.8 3P%) to move around without the ball, the better. According to Synergy Sports, Monsanto scored 1.1 points per spot-up possession this season, while posting an effective shooting rate of 54.5 percent on catch-and-shoot attempts.

Williamson showed the ability to operate pick-and-roll and make plays for other this season. He can make good decisions with the ball.

With more creation on the perimeter, though, Williamson can spend more time off the ball, hunting for juicy catch-and-shoot looks.

Up to this point in his career, Williams hasn’t been much of a 3-point shooter: 21-of-84 from downtown (25 3P%). Therefore, it’ll be important for Wake Forest to have as much shooting on the floor as possible when Williams is in the game. This is another reason why Whitt’s development (32.5 3P%) matters so much.

The additions of Jake LaRavia and stretch-5 Dallas Walton, two new transfers, should help in this regard. The 6-foot-9 LaRavia (36.2 3P%) and the 7-foot Walton (41 3P% career) both bring some shooting to Wake Forest’s frontcourt, which should improve overall half-court spacing.