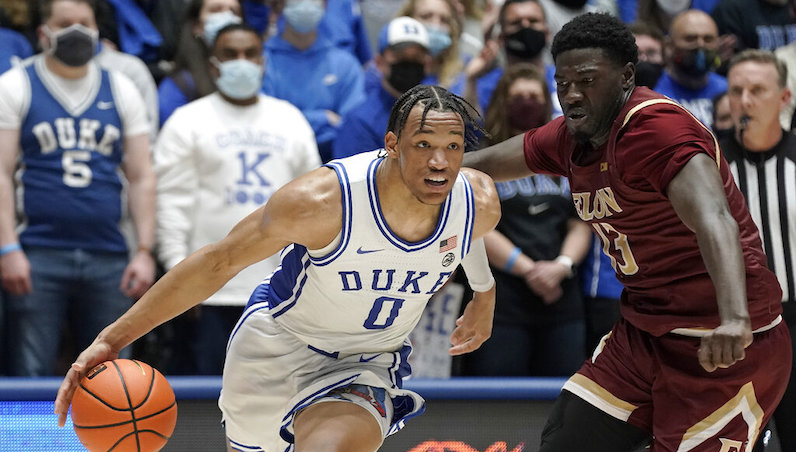 The Blue Devils are clearly the top team in the ACC. That gap — between Duke and rest of the league — continues to widen. However, Coach K’s squad will have a tough test this week in Cameron with visiting Virginia Tech.

Wendell Moore Jr. is Duke’s leader and one of the best players in the country; he’s been superb all season, following a massive advancement as a playmaker.

Moore has six dunks on the season (11 games), which is as many as he had his first two seasons combined (49 games).

Last week, I wrote about Moore’s craft when it comes to fake dribble-handoff moves, which he uses to turn the corner for baseline drives. This is one of the many reasons that Moore’s having a career year in terms of rim finishing: 77.6 FG% rim, with 74 percent of his rim field goals unassisted. Overall, he’s shooting 68.8 percent on two-point attempts.

With these lifted empty-side looks, Moore is racing by his defender to the rim. If you give WMJ a sliver of daylight, he’s taking full advantage and getting downhill.

Virginia Tech dropped some tough games early on this season when the Hokies faced tough matchups in terms of opponent length and athleticism.

Despite some of the uneasiness, the Hokies are still 8-4; Virginia Tech ranks inside the top 35 in terms of adjust offensive and defensive efficiency, according to KenPom.

Plenty of guys contributed for the win; however, it was nice to see junior wing Hunter Cattoor put together arguably his best game of the season.

Cattoor scored a season-high 21 points on only seven field goal attempts; he shot a sizzling 5-of-5 from beyond the arc, too.

As usual, Cattoor looked awesome shooting off movement. On this possession, Cattoor gets loose for a 3-ball off Virginia Tech’s Horns Down/Strong Twirl action.

According to Synergy Sports, Cattoor has scored 1.41 points per spot-up possession this season and 1.45 points per off-screen possession.

Wake Forest, while playing without forward Jake LaRavia, went 2-0 last week. The results over VMI and Charlotte were a little closer than Steve Forbes would prefer; however, a win’s a win.

Williams played 79 combined minutes in the two games for the Demon Deacons, too.

North Carolina had a weird couple of days last week. Out in Vegas, the matchup with UCLA was canceled due to COVID-19 concerns with the Bruins. Quickly, UNC scheduled a game with Kentucky. After that, it’s understandable for a team — players and coaches — to not exactly be on its Ps and Qs. However, what followed vs. the Wildcats is alarming.

On the other end of the floor, UNC snagged only six offensive rebounds and two of those were of the team variety. This just isn’t a winning formula for the Tar Heels.

Despite a sluggish offensive performance, Clemson dug in and took down South Carolina over the weekend. The Gamecocks are a woeful offensive team, but the Tigers held their in-state rival to 13-of-35 shooting on 2-point attempts (37.1 2P%) and 0.77 points per possession.

Clemson’s PJ Hall, one of the best post scorers in the country, is shooting 55.7 percent on his 2-point attempts, while averaging 14.7 points per game.

Jae’Lyn Withers put together a terrific redshirt freshman campaign one year ago. During the 2020-21 season, Withers mostly played as a small-ball center — working with two of the best guards in the country: Calik Jones and David Johnson.

The return of Malik Williams, however, meant a likely role change for Withers: he would play more with another traditional big man on the floor. With a clean bill of health, Williams has been a stud defensively, which is awesome to see.

When that duo plays together, though, Louisville is only +29 in 125 minutes. Unfortunately, the offense has struggled with Williams and Withers on at the same time: 93.7 points per 100 possessions, according to Pivot Analysis.

There have been moments to celebrate; Williams and Withers can both make plays on the short roll, which helps grease the wheels of potential spacing concerns.

Meanwhile, his decision-making has also slipped — resulting in a spooky 28.8 percent turnover rate, more than double from last season.

Malik Osborne continues to reaffirm his status as one of the ACC’s top veteran role players. The fifth-year forward/center has shot the ball incredibly well: 50 percent from beyond the arc (16-of-32 3PA) and 80 percent from the line (32-of-40 FT%).

A lower-usage player, Osborne (16.3% usage) remains a key scorer for FSU due to his efficiency: 11.8 points per game.

Moreover, Osborne is a low-mistake player who spaces the floor, cleans the glass and guards all five positions on defense. This is everything a coach could want from a veteran frontcourt player.

Miami was inactive last week, which is part of a larger late-December theme for the Hurricanes. Following a matchup with Stetson, the team’s final non-conference game, Miami is off until Dec. 29 — home to NC State.

As usual, Miami is getting it done with the pick-and-roll this season. Miami ball handlers have scored 1.06 points per pick-and-roll possession, a top-10 number nationally.

Due to a COVID-19 pause, Syracuse hasn’t played a game since two Saturdays ago. The Orange were forced to postpone two games last week.

With that said, wins over Arizona State, Indiana and Florida State still look good on the resume.

Speaking of the Florida State victory, if you missed it: Syracuse pulled off a second-half comeback due to a slight adjustment on defense.

Syracuse is known for deploying the 2-3 zone as its base defense — for decades now. However, Jim Boeheim flipped a switch and had his team play several possessions of 1-3-1 vs. Leonard Hamilton’s team. It worked, too.

During the second half, Syracuse outscored FSU 39-28, while allowing only 0.85 points per possession.

An up-and-down non-conference slate for Virginia was capped with a blowout win over Fairleigh Dickinson. This effort was inspired by power forward Jayden Gardner, who went for 29 points on 14-of-18 shooting, all 2-point attempts.

For the season now, Gardner is shooting just under 74 percent on cut field goal attempts, per Synergy Sports.

Even though NC State fell to Richmond in Charlotte over the weekend, there may have been a key developmental moment for sophomore center Ebenezer Dowuona.

Dowuona continues to be a big on/off swing pieces for NC State, too, per Pivot Analysis:

Dowuona, called into duty this season with Manny Bates sidelined, has been a crucial on/off player for NC State’s defense.

He’s quickly evolved into one of the better weak-side rim protectors in the ACC, too — helping deny opponent attempts around the basket.

According to KenPom, Dowuona ranks No. 35 nationally with a block rate of 10.4 percent.

In the Richmond game, Dowuona did a really nice job not biting on shot fakes from Richmond’s crafty, veteran center Grant Golden.

NC State needs him on the floor as much as possible. Looking down the road: the more poised Dowuona can be in one-on-one post defense situations — staying down, working to contest — the better.

Boston College lost to Albany last week. TJ Bickerstaff struggled on offense in that game, but the transfer forward continues to be a tank rebounding the ball for the Eagles.

The Yellow Jackets played only one game last week, but it wasn’t pretty: Georgia Tech scored 53 points (0.85 points per possession) in a loss to USC, one of the top defensive teams in the nation.

Michael Devoe went for 25 points — on 22 field goal attempts, the second-most for a single game in his career — but there wasn’t enough secondary scoring, once again.

Pittsburgh shrugged off another brutal offensive performance (0.86 points per possession) to grab another solid non-conference. St. John’s was without its star player — forward Julian Champagnie, who tested positive last week for COVID-19.

Mouhamadou Gueye had his best offensive game of the season — 15 points — while continuing to flash his skills as a rim protector: three blocks.