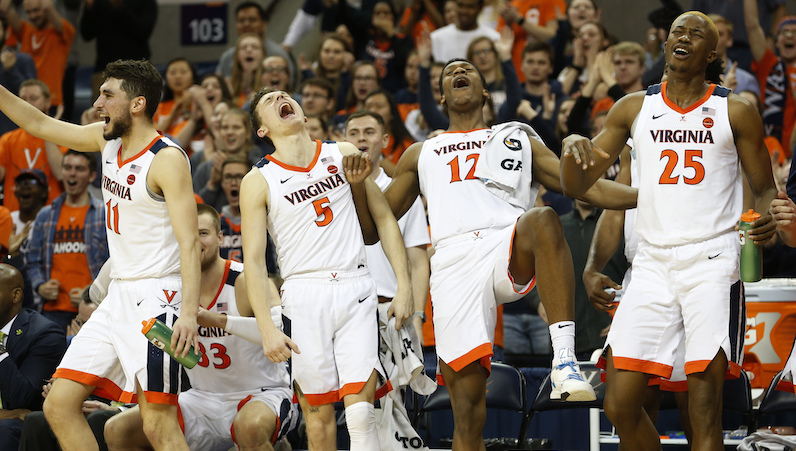 Busy night in the ACC as another weekend of hoops rapidly approaches. With the league’s tournament right around the corner in Charlotte, let’s check in on the defense of Mamadi Diakite, Virginia’s do-it-all offense, Ky Bowman goes box score bonanza and Elijah Thomas remains Clemson’s rock.

Fresh as a daisy: Mamadi Diakite

If you’re a Virginia fan, the 81-51 beatdown over Georgia Tech checked a lot of boxes. The Big 3 did it’s thing with De’Andre Hunter (29 percent usage rate), Ty Jerome (35 percent usage rate) and Kyle Guy (20.5 percent usage rate) combining for an efficient 48 points on 32 field goal attempts. While blazing on offense (1.36 points per possession, 64 eFG%), UVA held Tech to just 0.85 points per possession (42 eFG%). Virginia also assisted on 57 percent of its field goals, and was able to close the game out with some minutes for the deep bench. Check, check, check.

Speaking of defense, wow, Mamadi Diakite continues to bring the noise. All season long, Diakite has been a huge deterrent at the rim. He’s blocked at least one shot in 22 of 27 games now, and the rejections have come at an accelerated pace in ACC play; after three more blocks in 23 minutes against Tech, Diakite now leads the ACC in block rate during conference action: 12.9 percent.

For the season, Diakite has blocked 3.1 shots per 40 minutes; however, that number has jumped to 3.9 in league play. According to Synergy Sports, opponents are shooting just 29.7 percent on post-ups when Diakite is the primary defender.

CavsCorner Video: #UVa's Mamadi Diakite has blocked a shot in 20 straight games but it's his new look that has folks talking. So, how did it come about? And what did his mom think? (Full video here: https://t.co/B0NtBoguxe) pic.twitter.com/3LKBxqCBRl

Also — and I know you came here for this — Diakite has blocked 4.44 shots per 40 minutes since going with the blonde look. (I’m here for it and I’m guessing if he keeps blocking shots like this, Tony Bennett will be cool with it, too. Apologies to Mom, though.)

Inside The Playbook: UVA had the answers to all the questions

Georgia Tech entered Wednesday night as one of the top-30 defenses in the country, per KenPom. The Yellow Jackets like to mix and match half-court defenses — vacillating between zone and man-to-man depending on match-ups and game situations. However, it was the Wahoos dictating flow in Charlottesville.

Virginia’s zone offense is good, but not quite as efficient as last season. Perhaps with that in mind, Tech opened with a zone concept. However, zoning UVA isn’t a great option — even if its your best card to play. This team has shooting and playmakers all over the floor. Tony Bennett is also pretty darn good at pulling the strings.

Watch this possession early in the game. Virginia overloads the strong side of the floor with Kyle Guy flooring to the corner. The Cavs leverage a numbers advantage by having Braxton Key and human concrete slab Jack Salt set a double baseline scree for a cutting De’Andre Hunter — looking at the passing lane it creates against a zone designed to take these types of things away.

Clark wastes no time with the dime and Hunter (69.4 FG% at the rim) finishes with a boom.

Tech’s zone also struggled containing gaps and lanes. Several Cavaliers, including Key, were able to knife into the zone’s weak spot off the dribble.

Of course, sometimes special players do special things, like Dre Hunter here. Hunter continues to just get better and better.

When Georgia Tech ditched the zone and went man, well, UVA still got whatever it wanted. The continuity ball screen offense continues to hum in Charlottesville, especially when the Cavs clear out and attack with empty-side ball screens. Jay Huff continues to add value to the offense as a rim runner; he’s now shooting 77 percent on rolls or slips to the basket this season, per Synergy.

(Similar to the Louisville game, Hunter’s lift on the weak side of the floor clears out an extra help defender, too.)

For the second time in conference play, Boston College landed a win over a top-25 KenPom team. Back in January, BC defeated Florida State; on Wednesday night, the newest victory came over Louisville, 66-59.

This wasn’t a pretty win for the Eagles, who trailed by one at halftime and scored under one point per possession (41 eFG%). When all else fails, though, BC can lean on Ky Bowman (58 eFG% in transition this season).

This wasn’t the first time Bowman has flirted with a triple-double, but what a monster line Bowman slapped up vs. Louisville: 25 points (35.8 percent usage rate, 14 FTA), 12 rebounds, eight assists and three steals.

After some sluggish performances from an efficiency standpoint against Louisville, FSU and Boston College, Elijah Thomas got back to doing his thing in the win at Pittsburgh.

Thomas made just one trip to the free throw line, but scored 12 points (on 8 FGA) while grabbing eight rebounds (two on offense), dishing five assists. He also recorded three steals and three blocks (six stocks) — his 14th game of 2+ blocks now. Thomas ranks 25th nationally with a 10.1 percent blocks rate, just ahead of Diakite (10 percent, No. 27).

This is just the eighth time this season an ACC player has gone for 10 points, three steals and three blocks in one game.

Canada Basketball on the rise with Barrett and NAW; plus the efficiency of VT’s Blackshear