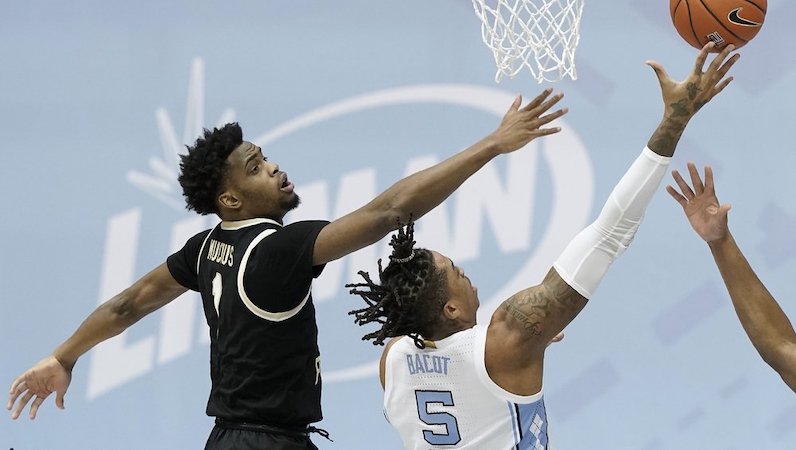 As North Carolina basketball shifts from Roy Williams to Hubert Davis, the 2021-22 season looks like a bit of a transition period.

UNC will part ways with several key figures from its frontline. Day’Ron Sharpe will head to the NBA Draft. Walker Kessler is now an Auburn Tiger; Garrison Brooks will also head to the SEC, set for Mississippi State, where he’ll team up with former NC State guard Shakeel Moore. (I’m still trying to wrap my mind around this configuration.)

However, the Tar Heels also return a good chunk of their rotation, while also welcoming in a couple of newcomers. In terms of culture, Carolina Basketball will always be Carolina Basketball, but Davis has vowed to change some aspects of the program.

One of the key areas to address will be North Carolina’s frontcourt rotation — 2022 and beyond. This cuts a couple of ways. Davis must obviously land talented prospects; however, a greater emphasis on fit should be a priority, too.

For decades, North Carolina has been one of the premier Big Man factories in college hoops. That will remain in place. With that said, though, there are ways to modernize that approach. The 2022 recruiting class serves as an early inflection point for Davis.

When the 2021-22 Tar Heels take the floor, they’ll do so with a veteran and talented 4-5 combination: Armando Bacot and Oklahoma transfer Brady Manek.

Bacot is currently testing NBA Draft waters, although he’s seemingly a lock to return for his junior year in Chapel Hill. As a 6-foot-10 floor-spacer, Manek is a nice complementary piece with Bacot.

During his four-year career with the Sooners, Manek averaged 12.0 points per game, while shooting 37.4 percent on 3-point attempts (235-of-628 3PA). Combine his junior and senior seasons: Manek launched 11.5 3-point attempts per 100 possessions.

Manek is known as a stretch 4-5; that’s why he was brought to Chapel Hill. The spacing Manek provides will open the lane for Bacot post-ups and high-low action. This should hopefully benefit point guard Caleb Love, too.

Love struggled to separate from defenders in one-on-one matchups as a freshman. He’ll need to make strides from a developmental standpoint; however, less congestion in the paint, with Manek pulling an extra defender out, should also help.

With Manek and sniper Kerwin Walton on the perimeter, UNC will be able to access lineups with multiple plus-shooters. Puff Johnson should have a role as well.

If Love’s pull-up jumper is able to find air next season, it would really add life to North Carolina’s half-court offense.

There still remains some smidgen of hope that Leaky Black finds footing as an average spot-up threat, which would be more than enough. While a stud defensively, the last two seasons have been the opposite of encouraging when it comes to Leaky’s shooting development.

In theory, Bacot could return again in the 2022-23 season, although that may not be in the cards. A lot will depend on what happens over the next 10-12 months. Regardless, UNC may be starting from scratch in the frontcourt two seasons from now. In the meantime, though, the Bacot-Manek duo is a really nice stopgap up front.

Of course, Virginia transfer big man Justin McKoy will factor into this rotation, too. The same can be said for incoming freshman forward Dontrez Styles.

Beyond that, though, North Carolina must focus on the bigger picture: finding future NBA talent up front that will fit updates in the program’s system.

With Division I athletics going back to (new) normal recruiting practices starting June 1, here’s a look at several 2022 frontcourt targets that UNC has offered.

Green is both the No. 1 prospect in the state of North Carolina (2022) and a priority target for the Tar Heels. There’s a fair amount of variance in terms of his overall class ranking, but given the volume of high-level offers Green’s collected, there’s no questioning his game.

Last summer, Green added offers from Louisville, Clemson and Kansas. UNC and NC State both eager to land Green, although the Heels have an edge. Green also holds offers from LSU, Auburn, Tennessee, Xavier and Virginia Tech, too.

During the 2020-21 season — following a mid-year transfer — Green led Asheville Christian Academy to a state championship.

Green will take an official visit to UNC June 11-12.

UNC offered Washington, one of the top prospects in the 2022 class, earlier in May. Washington hails from Big Ten Country; it’s no surprise that Indiana, Michigan State and Purdue are high on his list. Alabama is right in the mix as well. Make no mistake: Nate Oats and his go-go style of offense are here to stay. High-level recruits are already flocking to Bama.

Lively is a prospect on the rise; for now, though, he’s one of the more underrated prospects in the 2022 recruiting class.

UNC offered Lively when Williams was still the coach, but Davis has continued to pursue the 7-foot rim protector. Every high-major program on the East Coast will look to land Lively; however, Lively’s list is topped by North Carolina, Duke and Kentucky. UNC is the only program to offer Lively, up to this point.

Not many teams in college, let alone AAU, have two big men like Dereck Lively and Jalen Duren for Team Final. Duren has been terrific, as advertised. Lively has impressed with his improved skill and ability to hedge ball screens. Both guys putting a lid on the rim all weekend. pic.twitter.com/tcfXZeBxxU

During the middle of the 2020-21 season (Feb. 12), North Carolina offered Taylor — when Williams was still running the program. Indiana, Syracuse, Virginia and Virginia Tech are all in the mix, too.

From an ACC perspective, Virginia and Tony Bennett seem to make a lot of sense. Proximity plays a role in that notion, but it goes beyond that. Taylor is a big wing and a good shooter; that’s a player type that Bennett targets for his blocker-mover offense.

Taylor will take an official visit to UNC June 5-6, though.

According to Inside Carolina, UNC and Davis offered Shaver recently — back on May 16. During his junior season, the all-state selection averaged 14.3 points and 7.7 rebounds per game.

While UNC is mostly out of the running for Walker, he’s still worthy to highlight; Walker is a top-10 prospect in this class. Last summer, Virginia Tech managed to emerge as an early favorite for Walker; however, that’s changed.