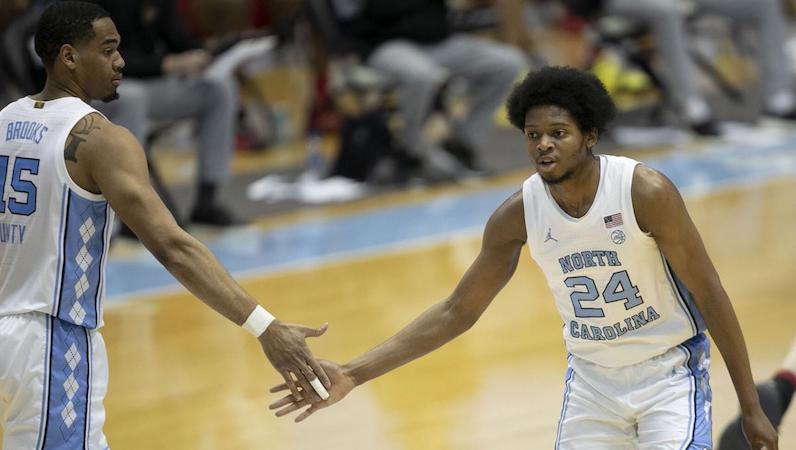 Kerwin Walton (24) and Garrison Brooks celebrate during the second half of North Carolina's win over Louisville. (Robert Willett/The News & Observer via AP

There’s an interesting hierarchy when evaluating North Carolina’s roster. The logical starting point for this thought exercise is in the frontcourt. UNC mauls opponents on the glass — No. 1 nationally in offensive rebound rate (40.9 percent) — with a quartet of talented post players. It’s in this program’s DNA to play inside-out.

Senior big man Garrison Brooks is a great college player, who can score in the paint and do a lot of different things defensively. Day’Ron Sharpe is the team’s most talented player and top NBA prospect: 18.7 percent offensive rebound rate, 4.7 percent block rate and 2.5 percent steal rate. At 265 pounds, Sharpe offers exciting duality as a prospect — a smooth decision-maker who plays with incredible effort and reckless force.

We know the other names: sophomore Armando Bacot is shooting 62 percent from the floor, while averaging 20.7 points and 13.9 rebounds per 40 minutes. Walker Kessler continues to get better and better.

Caleb Love is super gifted as well, though a lack of burst (44.4 2P% on close 2PA) and shaky decision-making (26.2 TOV%) this season have caused his 2021 draft stock (lottery hype before the season started) to plummet. Love will flash the occasional stroke of brilliance, but serious player development work must be done.

And then there’s Kerwin Walton — the lowest-rated prospect in North Carolina’s 2020 recruiting class, and quite possibly the most important player on the roster. Scarcity in terms of skill set is a very real thing.

Looking back before moving forward

During the 2020 offseason, I raised some concerns regarding North Carolina’s 3-point shooting for the 2020-21 season. Yes, the Tar Heels were exiting their worst shooting season under Roy Williams (46.4 eFG%); it seemed inevitable that there would be some regression to the mean.

However, things are never that black and white; context matters. Not only was UNC set to lose the three best shooters from the 2019-20 roster — Cole Anthony, Brandon Robinson and Christian Keeling — but frontcourt personnel would certainly dictate at least two non-shooters (if not more) on the floor at all times. Before the season started, I asked three questions:

Even with Kessler’s improved play in recent weeks, he still doesn’t have a 3-point shooting element to his game. It was encouraging to see him go 1-for-2 on 3-point attempts vs. Northeastern; however, the 7-foot freshman has only four 3-point attempts all season. Stretch-5 Kessler is likely a longer-term project. There’s potential here; the 3-ball is something Kessler may eventually need to tap into for the next level. But this process will require more patience, it seems.

Leaky Black does a variety of things for North Carolina. He’s a rangy, impactful defender: 2.8 percent steal rate is nothing to sneeze at. According to Pivot Analysis, UNC’s defense allows 3 points fewer per 100 possessions with Black on the floor.

Over on the other side, Black is a capable playmaker, too. The eight assists he dished out in a win over Wake Forest were one away from tying a career high.

Occasionally, Black will dazzle as an open-floor transition passer — where he can really show off his vision and passing touch: 3.8 assists per 40 minutes.

His shooting, however, has mostly stalled out. While attempting only 2.2 3-pointers per 40 minutes (a tiny number for a wing), Black is shooting just 22.2 percent from deep. For the second straight season, he’s under both 42 percent effective shooting and 69 percent from the free throw line.

With a 13 percent usage rate, Black also very rarely gets to the free throws line. As a junior, he’s drawn just 2.6 fouls per 40 minutes, while attempting only 48 free throws.

Obviously, this complicates his offensive role. Playing Leaky on the wing ensures that UNC will play offense with three non-shooters on the floor for the majority of the game. That’s tough, especially with Black being such an integral part to North Carolina’s defense and secondary game. Something has to be sacrificed, one way or the other.

(It would be nice if Leaky could see more time at the 4, but with this frontcourt this congested already, that’s highly unlikely. Depending on how the roster shake out, next year could allow for more opportunities, though.)

Individually, this also limits him as a passer. Black can run pick-and-roll, but his lack of a jumper changes how teams are able to cover him. Primary creation opportunities are more narrow in scope. The junior wing is better suited to function as a connector and off-ball cutter in the half court.

Fortunately for Roy Williams, that first question from above can be answered rather definitively: Kerwin Walton is your one-stop shop for perimeter jump shooting.

Walton, the final piece of UNC’s monster 2020 class, didn’t commit to North Carolina until late April, after Jeremiah Francis and Brandon Huffman left the program. It’s slightly chilling to imagine just how grim things would’ve been this season on offense for the Heels if Walton didn’t land in Chapel Hill.

Going back to the 2007-08 season, Walton is in line to become just the seventh ACC rookie to shot above 40 percent while averaging 10+ 3PA per 100 possessions. If he accomplishes this feat, Walton will join several notable names with this distinction, including current NBA guards Gary Trent Jr., Kyle Guy and Joe Harris. (Virginia Tech’s Jalen Cone and Hunter Cattoor managed this last season, too.)

Walton is the only reliable high-volume wing shooter on the roster (41.2 3P%). He breathes necessary life into UNC’s half-court offense and secondary attack.

Once again, North Carolina ranks outside the top 330 nationally in 3-point attempt rate. Only 27.7 percent of North Carolina’s field goal attempts have come from beyond the arc; that’s actually a slight decline from last season (28.9 percent).

However, remove Walton from that equation: the rest of North Carolina’s roster has combined to make only 26.2 percent of their 3-point attempts.

Walton is a strong catch-and-shoot player; nearly 90 percent of his 3-pointers this season have been assisted. He is more than a standstill shooter, though. Walton has good movement shooting abilities — relocating or shooting off screens. If he continues to progress, Walton could hold a role similar to Cameron Johnson in 2018-19, when he emerged as the nation’s top movement shooter. (Johnson is a legit 6-foot-8, which added to his ridiculous shot-making abilities and opens the door for him to play as a small-ball 4 in the NBA.)

A priority for Walton will be to speed up the release on his jumper. Any advantage gained here will go a long way.

He’s also shown the ability to shoot off the dribble, including when he needs to attack a hard closeout or opponent defenses botch assignments against UNC’s continuity ball screen sets.

Secondary creation tactics like this are really important for Walton. Opponents will want to run him off the line, but he can continue to make them pay with reliable countermoves: pull-up shooting and heads-up passing (3.7 assists per 40 minutes.)

Walton accounts for 37.3 percent of North Carolina’s made 3-pointers and 27.5 percent of the team’s 3-point attempts this season. It should come as little surprise that when North Carolina dropped recent games to Marquette and Syracuse that Walton struggled shooting from deep: combined 2-of-14 3PA. In both of those games, UNC scored under one point per possession.

Looking ahead to next season: there are reasons to be more bullish on the longer-term shooting prospects of Love, RJ Davis and Puff Johnson. For 2021, though, it’s truly on Walton to bolster UNC’s otherwise anemic perimeter shooting.

One of the ACC’s top prospects, Sharpe brings infectious energy to the defensive side of the floor