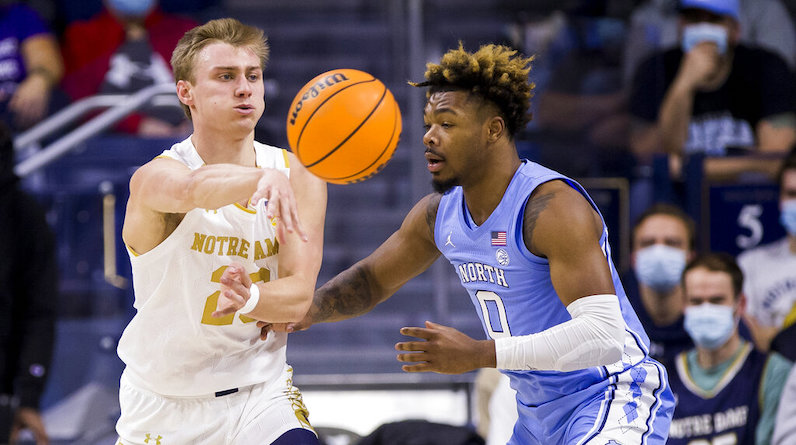 When North Carolina hosted Georgia Tech on Saturday, the Tar Heels cruised to a 23-point victory, 88-65. The usual cast of characters led the way; Armando Bacot was superb, scoring 29 points and grabbing 12 rebounds. However, Hubert Davis and UNC were without one familiar name: Anthony Harris.

The redshirt sophomore wing, who is a part of North Carolina’s rotation as a reserve, was “unavailable” to play, according to UNC. The program’s official Twitter account made note of the roster update an hour before tipoff on Saturday.

Anthony Harris will be unavailable for tonight's game 🆚 Georgia Tech

If you watched the game, you could see that Harris wasn’t on the bench; in fact, he wasn’t with the team. Harris last played for North Carolina during the win over Virginia: five points in 16 minutes.

That game took place two Saturdays ago — back on Jan. 8, two days before spring semester classes started at UNC.

When asked this week about the status of Harris, Davis said there’s no update to report ahead of the team’s game on Tuesday at Miami.

Hubert Davis said there’s still no update on status of Anthony Harris for UNC’s game Tuesday at Miami. Harris was not with the team for Saturday’s win over Ga Tech

Once again, Harris will sit out as North Carolina plays at Miami on Tuesday night.

The Tar Heels and Hurricanes tip this evening at 7 p.m. on the ACC Network.

Before Harris arrived at North Carolina, he was a 4-star prospect in the 2019 recruiting class. Initially, Harris committed to Virginia Tech in Oct. 2018. However, Harris was released from his LOI after Buzz Williams left for Texas A&M.

Three weeks later, Harris committed to North Carolina; he joined a strong 2019 recruiting class along with Cole Anthony and Bacot. In April 2019, Harris actually picked UNC on the same day that Anthony committed, too.

During his senior year of prep basketball (2018-19), Harris missed most of the season after tearing his left ACL in December. Harris played for Paul VI Catholic, where he was teammates with current Duke guards Jeremy Roach and Trevor Keels.

Unfortunately, the bad luck with injuries followed Harris to Chapel Hill. Five games into his freshman season, tore his right ACL during a Dec. 2019 game vs. Yale.

The 2021-22 season started slowly for Harris, too. He appeared in only nine total minutes across the first three games. As North Carolina leaned in on more double-point guard lineups with Caleb Love and RJ Davis playing together, the wing rotation tightened. Kerwin Walton has struggled with his jumper this season, but he’s an important offensive piece. Leaky Black is North Carolina’s top defender on the wing, too.

Harris has appeared in 14 games this season — playing an average of 11.7 minutes per game.

Without Harris: Who stands to benefit?

Throughout his career, Harris showed an ability to be a sound perimeter defender — due to a combination of system know-how and size. Harris averaged 2.2 steals per 40 minutes across his first two seasons at UNC.

Harris has never been a high-usage piece on offense, which continued into this season; he posted a 13 percent usage rate. He’s struggled with turnover issues this season: 29.2 percent turnover rate.

Beyond Love, Davis, Black and Walton, there isn’t a lot of available time on the perimeter. According to Pivot Analysis, Love and Davis have played 412 minutes together this season. With an offensive rating of 123.4 points per 100 possessions, UNC is +145 in those minutes.

Last season, Love and Davis played a total of 314 minutes together. The Tar Heels were +15 with Davis and Love together. If Harris is gone long-term, expect that quartet of players to pick up even more slack.

However, the freshmen duo of D’Marco Dunn and Dontrez Styles could stand to benefit and find additional backend rotation minutes. So, too, could sophomore wing Puff Johnson, the younger brother of Cam Johnson. During the Georgia Tech win, Johnson appeared in his first game of the season.

Puff Johnson checks in for the first time this season 🙌

Bacot pushes UNC to No. 2 in this week’s ACC Power Rankings