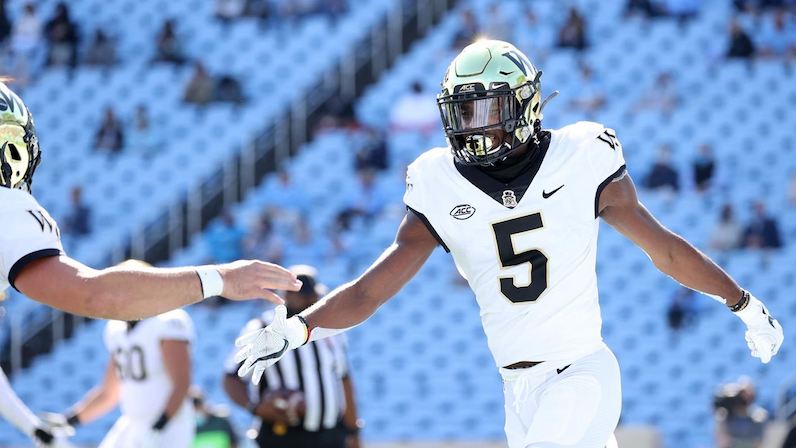 During the 2020 season, Jaquarii Roberson led the ACC with an average of 102.9 receiving yards per game. (Photo via Wake Forest Athletics)

The 2021 ACC football season is merely weeks away. NC State will take on South Florida 50 days. Before that, ACC media days are right around the corner in Charlotte, too.

With that in mind, we’ll start going through some position-by-position rankings for the ACC as things ramp up. To kick things off: here’s a statistical look at the top wide receivers in the ACC — starting with No. 5.

Over his first three seasons with Miami, Harley hauled in 68 receptions for 816 yards and three touchdowns. The talent was always there, but with a myriad of quarterback issues, and needing to split touches with other talented skill players, Harley never quite had a signature season.

That all changed when D’Eriq King arrived, though.

During his breakout 2020 season, Harley posted 57 receptions for 799 yards (14.0 yards per catch) and eight touchdowns. Working with an accomplished quarterback, Harley nearly mirrored what he did in the three prior seasons.

Emezie has been a fixture of NC State’s receiving corp for years now; he’s one of the most decorated pass-catchers in program history. Emezie ranks fifth in school history with 169 career receptions and seventh in career receiving yards (2,093).

Going back over the last three seasons, the 6-foot-3 (212 pounds) Emezie has a catch in 32 consecutive games. During the 2020 campaign, he was one of the most efficient receivers in the country: a catch machine, who also averaged a career-best 15.7 yards per catch.

While working with Jeff Hafley and quarterback Phil Jurkovec, Flowers posted one of the best seasons at the wide receiver position in program history. Flowers ranked 18th nationally and fourth in the ACC with 892 yards receiving.

Flowers also led the league with nine touchdown receptions; he finished tied with UNC’s Dyami Brown for the most receptions of 25+ yards (14) in the ACC, too.

Boston College moved Flowers all over the field. According to Pro Football Focus, 48 percent of his route runs came from the slot, with 52 percent coming on the outside. PFF’s receiving grade metric graded Flowers above 70.0 from both outside and the slot. Flowers was one of three Power Five receivers to run 100 routes in the slot and on the outside, while posting that receiving grade at each position.

Alabama’s DeVonta Smith, the Heisman Trophy winner, and Ty Fryfogle of Indiana were the other two.

When Boston College lined Flowers up on the outside, he turned into one of the country’s top high-volume deep threats. Flowers averaged 19.5 yards per target on outside routes, according to Pro Football Focus.

Regardless of coverage scheme, Roberson was a game-breaker for the Demon Deacons. He ranked top 10 nationally in terms of separation percentage against single coverage, according to Pro Football Focus.

However, when Wake Forest went up against zone, Robertson recorded 340 receiving yards from finding a gap in zone coverage — No. 2 in the FBS. He averaged 7.6 after the catch vs. zone defense, too.

Due to spinal surgery last June, Ross — one of the top receivers in college football — was forced to miss the entire 2020 season. Ross didn’t start lifting weights again until last October.

Prior to his injury, Ross lived up to his blue-chip billing — from the same 2018 recruiting class as Trevor Lawrence. As soon as he arrived at Clemson, Ross took flight as a lanky pass-catcher who could make plays deep down the field or hunt for touchdowns in the red zone.

As a true freshman, Ross led the ACC with 15 receptions of 25+ yards, while ranking second with an average of 21.7 yards per catch. With that 2018 season, Ross is one of only four ACC receivers, dating back to 2000, to record 1,000+ receiving yards, 5+ touchdown receptions and average 20+ yards per catch in a single season. He’s joined by Dyami Brown (twice), Demaryius Thomas and Snoop Minnis.

During the 2018 and 2019 season, Ross finished with a combined 11 touchdowns on targets of 20+ yards, which ranked third in the FBS over that stretch, per Pro Football Focus.

ACC WRs who catch 70% of their targets and average 15 yards/reception:

142.3 passer rating when targeted this season for OU