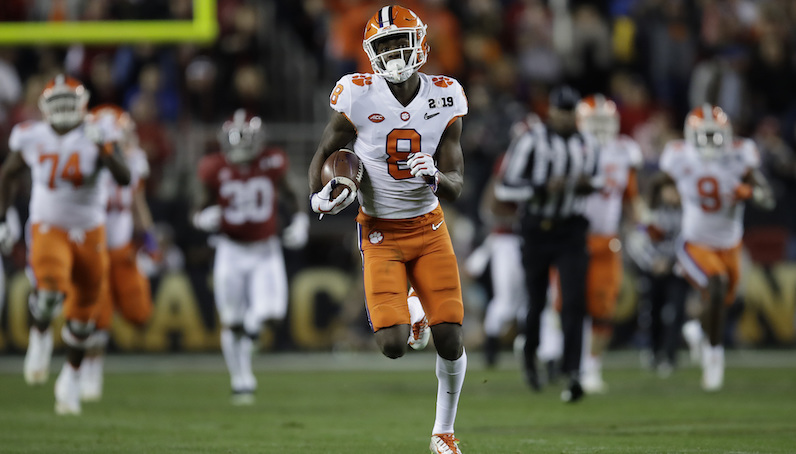 Heading into the 2019 season, there are two groups that have the most legitimate claims to being the best wide receiving corp in college football. Stop me if you’ve heard this one before, but it comes down — again — to Clemson and Alabama.

Part of what made Trevor Lawrence’s rise so attention-grabbing was that it was correlated with the success of a loaded class of receivers — some of whom project out as future first round picks. And with the exception of Hunter Renfrow — now with the Oakland Raiders, cast as 2019 Dane Sanzenbacher — all of those dudes are back, too.

Justyn Ross, Tee Higgins and Amari Rodgers are here — plus a new (seemingly unnecessary) infusion of talent has joined the mix as well. It’s an embarrassment of riches for the Tigers.

Justyn Ross in the CFP

After what he did against Notre Dame and Alabama, Ross is the greatest wide receiver in the history of the College Football Playoff. It’s that simple. In those two games, Ross caught 12 passes (on 18 targets, 66.7 percent catch rate) for 301 yards (25.1 yards per catch, 16.7 yards per target) and three touchdowns. These are absurd numbers.

According to Bill Connelly’s data, the 6-foot-4 Ross was the second most targeted receiver on Clemson’s roster last season: 72 targets, 14.6 percent of the team’s pass attempts. He caught 46 of those passes, which translates to a catch rate of 64 percent — nearly 14 yards per target. This is massive production, especially for a freshman.

On this play, Clemson stacks Ross and Higgins to the top and works one-on-one coverage. Good luck defending that.

With a surplus of height and speed, Ross has all of the traits that make him an absolute terror in the air — ridiculous body control, the ability to separate and those excellent hands. He can absolutely high point the football, and make all kinds of back-shoulder or jump ball catches.

Ross, a native of Alabama, finished the season with exactly 1,000 yards receiving and nine touchdowns. He ranked fourth in the FBS and No. 1 in the ACC in terms of yards per catch, too: 21.7 yards.

He was sensational after the catch, too, as Pro Football Focus notes.

Going back to the 2000 season, he’s one of only two ACC receivers to record at least 1,000 yards receiving on 50 or fewer catches, per Sports Reference. (The only other player to accomplish that feat: future All-Pro wide receiver Demaryius Thomas in Georgia Tech’s option/chuck-it-deep-if-throwing offense.)

Of his 46 receptions, 34 went for touchdown or a first down; nearly a third of his receptions (15) were completions of 25+ yards.

There’s a small sample warning here, but on third down, Ross was ridiculous: 12 receptions for 395 yards (32.9 yards per catch), four touchdowns and 10 catches of at least 15 yards. There’s a reason why Ross enters 2019 with fringe Heisman Trophy buzz. He’s a big-play machine.

Ross wasn’t alone in terms of a strong close to the season, though; Higgins caught seven balls (19.1 yards per catch) and two touchdowns over the final two games. Similarly, Higgins scored style points with a couple of circus grabs, too.

Another rangy, 6-foot-4 receiver, it didn’t take too long for Higgins, another former 5-star recruit, to deliver in Death Valley. Near the close of the 2017 season, Higgins hauled in six passes for 178 yards and two touchdowns against Citadel.

While Higgins certainly has the ability to get vertical and fly by defenders, he also established himself as a threat closer to the goal line. Using red zone as a measuring stick is sort of arbitrary; however, of his 12 touchdown catches, eight came from inside the red zone.

Who had the lowest drop rate in the ACC? That would be Tee Higgins. pic.twitter.com/ssbSy4sJ0k

Higgins also had five touchdown receptions that came on completions of 10 or fewer yards. He’s tall, long and physical; Higgins plays unafraid of contact and he knows how to leverage his size to create space in tight quarters.

Amari Rodgers — When will he be back?

Right now, it’s a pretty charmed existence to be a fan of Clemson Football, or associated with the program in some fashion. Back in late March, however, the Tigers hit a rare speed bump; during a spring practice, veteran receiver Amari Rodgers tore his ACL.

With an injury like that taking place just five months before games actually start up, there was fear that Rodgers could miss significant time in 2019. Fast forward a few months later, though, and Rodgers is reportedly ahead of schedule — on pace to see to game action in September.

As of right now, specifics are low — at least for the public — on when Rodgers will be back. Clemson does open with three Power Five opponents, too: Georgia Tech, Texas A&M and Syracuse. The Tigers clearly have more than enough offensive firepower to withstand the absence of Rodgers; however, he will likely be a valuable member to his bunch when he does return.

Rodgers may not look like a small forward that’s converted to football — à la Ross and Higgins — but he’s reliable performer in the slot. With Renfrow in the pros, Clemson must make up for his lost production. Rodgers is at the top of that list.

As a sophomore, Rodgers was super dependable, too. He was targeted 71 times (third most on the roster) for 55 catches and 575 yards (10.5 yards per catch, 8.1 yards per target). That translates to an efficient catch rate of 77.5 percent. Rodgers had eight receptions on third down — seven of which went for a touchdown or a first down.

Two big pieces of Clemson’s 2019 recruiting class, which ranked top 10 nationally, are two more 6-foot-4 receivers. Frank Ladson (No. 39 overall prospect) and Joe Ngata (No. 52 overall prospect) both arrived to Clemson in January; and they wasted no time acclimating themselves to the college game, too.

Pro Football Focus ranks Alabama’s bunch as the top group of receivers in the country, in part because the Crimson Tide return so much depth at the position (1-5). That calculus could change, though, if Ladson or Ngata (or both) pop early on.

Lets face it, Alabama will field the best wide receiver corps in the nation.

Rodgers, who played outside plenty last season but now moves full-time to the slot, has already begun running and cutting again. However, he will start the season on the sideline. That has pushes veteran Diondre Overton, who missed the spring game, to the slot.

At 6-foot-4, Overton is big compared to a prototypical slot receiver; it is a little hilarious to think about Clemson featuring five receivers that are 6-foot-4. They’ll look like a position-less basketball lineup (in terms of height) attacking a bunch of 5-foot-10 defensive backs.

Chase has appeared in 29 career games (348 snaps): 18 receptions for 136 yards with three touchdowns. Last season, he was targeted 18 times and finished with 13 receptions — a catch rate of 72.2 percent. Powell (369 career snaps), on the other hand, caught five passes on eight targets.

ACC Roundtable: Can anyone contend with the Clemson Tigers in 2019?