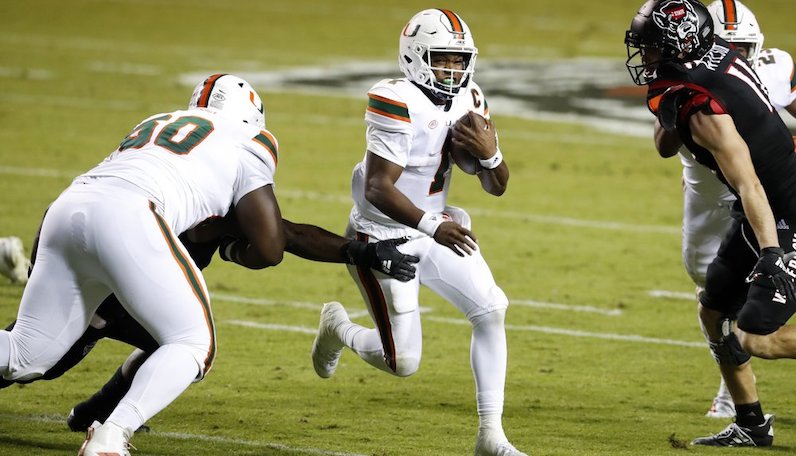 When Florida State hosts Miami in football on Nov. 13, quarterbacks D’Eriq King and McKenzie Milton will likely face one another from opposite sides of the field. However, away from the stadium, those two will be on the same team. With the new interim name, image and likeness (NIL) policy adopted by the NCAA, King and Milton are able to become teammates — in a sense.

King and Milton are co-founders of Dreamfield, an NIL platform that will specialize in “booking live events for student-athletes, including autograph signings, meet-and-greets and speaking engagements,” according to ESPN’s Andrea Adelson.

Matthew Cleveland, an incoming 5-star recruit for FSU basketball, is involved, too.

Milton will also become the first active college athlete with his or her own NFT (non-fungible token). The expectation is for King to have his own NFT later this summer, too. Dreamfield clearly plans to compete in the NFT market.

The state of Florida will allow college athletes to make money based off their NIL starting today: July 1, 2021. A dozen other states are set to follow; however, with the NCAA’s new policy, things are opening up elsewhere, too, although some of those waters are a little murky, currently.

🚨 Just a quick PSA 🚨 Although we are a Florida-Based company, we accept all athletes from anywhere in the United States to be a part of the Dreamfield Family! Everyone is Welcome!

This already includes other ACC football players — like Louisville quarterback Malik Cunningham, who is now booking through Dreamfield. King and Milton can be booked for at $2,000 per hour.

During the 2020 season — his first with Miami — King completed 64.1 percent of his pass attempts, while throwing for 2,686 yards (8.2 per attempt) and 23 touchdowns. Back in December of 2020, King decided to return for his sixth season of college football; the first four were spent at Houston. Now, he’ll actually be able to make some money before he turns pro.

Before a knee injury drastically reshaped his college career, Milton was arguably the poster boy for Central Florida’s rise as a college football power. While leading UCF to an undefeated (13-0) record in 2017, Milton threw for over 4,000 yards and 37 touchdowns.

Milton hasn’t played since the 2018 season. Following the 2020 season, Milton decided to transfer to Florida State.