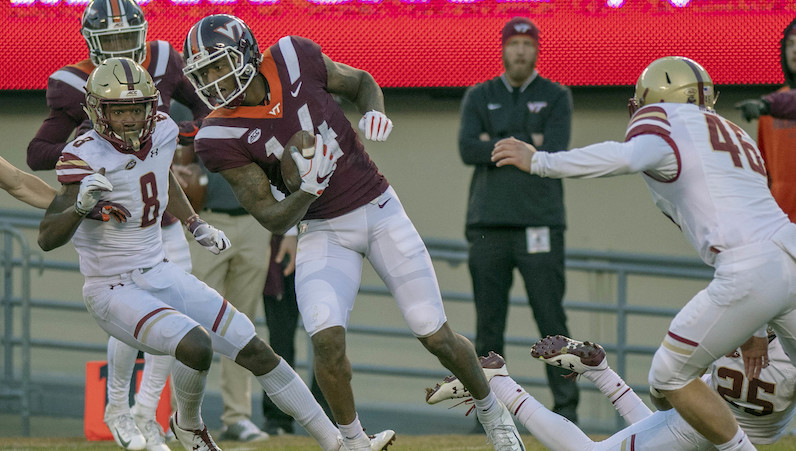 The 2019 season is a new page for Virginia Tech as Justin Fuente and the Hokies look to put last season’s 6-7 campaign in the past. There are reasons to be bullish on the Hokies this year, too. First off, the defense — which ranked outside the top 80 in the FBS in both passing and rushing S&P+ — should see some progression. You can dress it up as one last hurrah for Bud Foster if you want; however, it’s unlikely that this unit struggles again like it did last season.

Assuming that happens, Virginia Tech has an offense that should be fairly efficient in putting points up on the board. Add those two together, and it’s easy to see why Tech looks like an eight-win team. That may not be enough to win the Coastal Division, but it certainly puts a team in the conversation.

Speaking of that offense, though, let’s take a quick look at what should be a solid bunch this season in Blacksburg.

Ryan Willis at the helm

As a whole, the ACC isn’t exactly stacked at the quarterback positions — despite having college football’s top prospect at the position, Clemson’s Trevor Lawrence. However, it’s safe to say that Ryan Willis established himself as a top five quarterback in the league heading into 2019.

What is in store for Virginia Tech and Ryan Willis this season? pic.twitter.com/df7gBuibkU

Even after the departure of Eric Kumah (42 catches on 66 targets), who transferred to Old Dominion (oh, the irony), Virginia Tech still brings back a solid group of players for Willis to work the ball to on the perimeter. That list starts with Damon Hazelton, one of the more underrated receivers in college football.

The Ball State transfer got off to a strong start in 2018; over the first five games of his tenure at Virginia Tech, Hazelton had three 100-yard receiving games and caught a touchdown pass in each game. Later in the season, Hazelton had some struggles, especially against Trajan Bandy and Miami.

However, Hazelton still finished the season as Tech’s leading receiver (51 receptions for 802 yards) and the team’s most targeted player, too. According to Bill Connelly’s data, Hazelton was targeted 92 times — close to 23 percent of Virginia Tech’s pass attempts. That translates to a catch rate of 55.4 percent.

Biggest #Hokies snubs probably WR Damon Hazelton and TE Dalton Keene. They had the numbers last year to be in consideration. Tre Turner might have higher ceiling than both but only really came on late last year as a freshman.

There’s certainly room to improve, but Hazelton was one of five players in the ACC last season to have at least seven touchdown receptions and average 15+ yards per catch. With his frame (6-foot-2), vertical speed and another season of reps with Willis, Hazelton should continue to emerge as one of the better receivers in the ACC and an NFL prospect.

After a strong freshman season, folks should be ready for Tre Turner’s star to shine even bright in 2019. A former 4-star prospect and the younger brother of North Carolina Basketball player PJ Hairston, Turner started to cook over the final two months of last season for the Hokies.

Starting with the the Pittsburgh game, Turner had 16 receptions for 326 yards (20.4 yards per catch) and two touchdowns in Tech’s final five games.

Tre Turner is ready to shine for Virginia Tech this season. pic.twitter.com/H2D1TzBmRb

For the season, Turner finished fourth on Tech’s roster in terms of targets — 42 (62 percent catch rate). He averaged over 20 yards per catch (20.6) and nearly 13 yards per target (12.7). This is a nice little blend of explosiveness and efficiency.

(Turner also recorded eight carries for 101 yards and a touchdown, too, which came in the loss at Miami.)

As a rookie, Turned had seven receptions of 30+ yards, which was tied for fifth most in the ACC. Think about it this way: nearly 17 percent of his targets turned into receptions of 30 or more yards. That’s not too shabby.

Clemson’s receivers are clearly the tops in the league, but Virginia Tech has a really nice pairing with Hazelton and Turner.