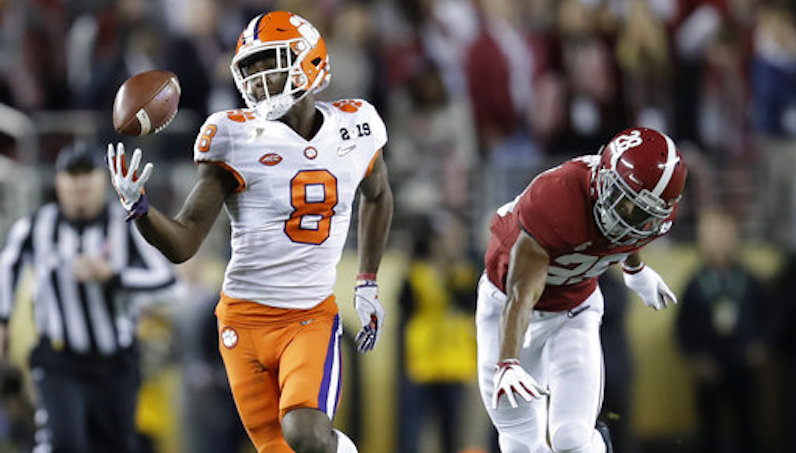 The fireworks started quickly, on both sides, but by the end of the night only one time was still in a festive mood. A one-yard touchdown plunge from Clemson’s star running back Travis Etienne — his second of the game, an FBS-leading 24th of the season — less than four minutes into the second quarter marked the sixth score of the game. Three of the Tigers; three for the Crimson Tide.

At that point, Clemson led 21-16; it looked like a shootout for the ages, in the fourth chapter of what’s become college football’s preeminent rivalry. That, however, was not the case. It was Clemson’s night. The Tigers win 44-16 over Alabama — handing Nick Saban his largest loss while running the show in Tuscaloosa.

Clemson becomes the 13th program to win at least three national titles in the AP Poll era (since 1936). pic.twitter.com/BJXD1KIvZA

Clemson, the kingpin of the ACC, hit another level. True freshman quarterback Trevor Lawrence was sensational in victory: 20-of-32 through the air (62.5 percent) for 347 yards and three touchdowns. This is the ideal manifestation of Dabo Swinney’s calculated gamble to transition from Kelly Bryant to Lawrence.

Trevor Lawrence is the 3rd freshman in FBS history with 30 passing touchdowns in a season.

The other offensive star of the night — wideout Justyn Ross, another rookie — took to the skies, hooking up with Lawrence numerous times: six receptions for 153 yards and a 74-yard touchdown. Style points were off the charts, too.

Turnovers were also costly for Alabama. Clemson’s A.J. Terrell intercepted Tagovailoa and returned it 44 yards for the team’s first score. Then in the second quarter (21-16, Clemson), Tagovailoa, who entered the game with only four interceptions all season, tossed his second pick.

This Keeps Rolling at Clemson

The groundwork is ready for next season, too. It seems almost ridiculous, but Lawrence has two more seasons, at least, college football; Etienne will be back next season, as will Ross and Tee Higgins.

When it comes to the gold standard in college football, there are only two, right now: Clemson and Alabama. Tonight, though, the Tigers run the show, alone.

No Matter What, Get The Ball to Travis Etienne