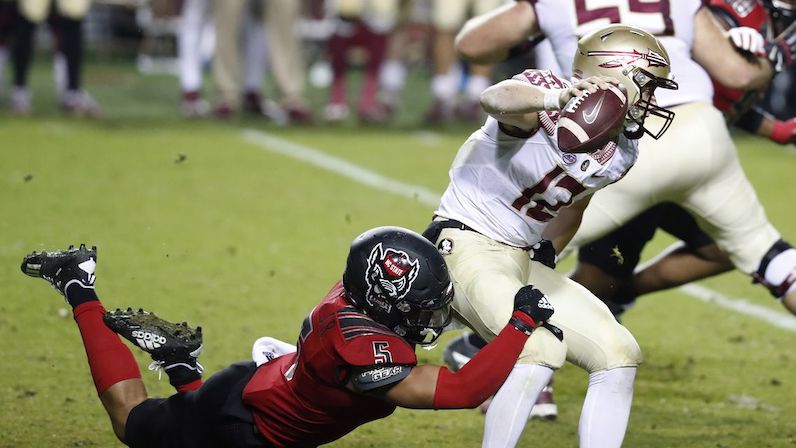 Chubba Purdy, who will miss the rest of the season for Florida State, gets pressured against NC State. (AP Photo, Ethan Hayman)

Every week during the 2020 football season we highlight five ACC rookies that put together standout performances. This week’s group is heavy on wide receiver — led by Wake Forest’s Donavon Greene, Lavel Davis of Virginia and North Carolina’s Khafre Brown.

Playing for the first time since Oct. 17, Lavel Davis took flight against Louisville. The 6-foot-7 wideout hauled in four receptions for 74 yards (18.5 yards per catch) and a nine-yard touchdown. All four of his receptions went for first downs.

For the season now, Davis — a matchup concern for any opposing secondary — has 13 catches for 284 yards (21.85 yards per catch) and four touchdowns. Davis has emerged as a challenging vertical threat; the rookie receiver has 10 catches for 15+ yards, too.

After experiencing a great deal of turnover at the wide receiver position, Wake Forest needed new players to step up. And while Jaquarii Roberson has become Sam Hartman’s top target, redshirt freshman Donavon Greene has emerged, too.

WF coach Dave Clawson has been high on the potential of young and developing receiver Donavon Greene all year, noting it took time for Sage Surratt and Scotty Washington to develop into the huge threats they became in 2019. The R-Fr. so far today: 5 rec, 136 yards and a TD.

During the shootout loss at UNC, Greene caught eight passes for 170 yards (21.25 yards per catch) — both career highs — and two touchdowns.

However, as good as those two have been all season, UNC has received strong efforts from its secondary weapons, too. Despite a couple of drops, Khafre Brown, Dyami’s younger brother, grabbed three passes for a career-best 87 yards (29 yards per catch).

That’s not going to sit well at home… Khafre Brown has a 75-yard TD that’s wiped off the board because his brother Dyami gets flagged for an illegal block.

Brown has 12 receptions on the season now (22.75 yards per catch); half of the rookie receiver’s catches have gone for 15+ yards.

Sitting undefeated, Notre Dame’s offense has hummed this season, behind a strong offensive line, with quality decision-making from Ian Book and Kyren Williams on the ground.

During the second quarter of Notre Dame’s road win over Boston College, however, Williams left with an ankle injury. This put the spotlight on Book, who had a career day throwing the ball, freshman running back Chris Tyree.

Love that run by Chris Tyree. Decisive. Up the middle. Good to see the freshman flash in a good way there.

After seeing a reduced role in the team’s running game in recent weeks, Tyree went for 74 yards on the ground. Tyree also returned four kickoffs for 84 yards. The former 4-star recruit, who committed to Notre Dame over Oklahoma and Alabama, ranks third in the ACC with 320 yards on kickoff returns this season.

The loss at NC State dropped FSU to 2-6 on the season. As Mike Norvell looks for future solutions, he’s pushed a youth movement in his program; part of that process includes turning the quarterback position over to Chubby Purdy.

(Unfortunately, this transition won’t last for too long: earlier this week, Norvell announced that Purdy will miss the remainder of the 2020 season with a collarbone injury — initially suffered back in August.)

Purdy’s college career started in rough fashion, though. During his debut against Louisville — on in relief of Jordan Travis — Purdy went 0-of-9 passing the ball. So, not great.

The loss at NC State was far from a virtuoso performance; however, Purdy put up semi-decent numbers. Purdy completed 15-of-23 pass attempts (65.2 percent) for 181 yards (7.9 yards per attempt), two touchdowns and zero interceptions. So, not bad. (Purdy’s late-game touchdown pass to Warren Thompson was quite pretty, too.)

I know it doesn't really mean anything, but maybe in the grand scheme of things it does. That's – by far – the best play of Warren Thompson's career.