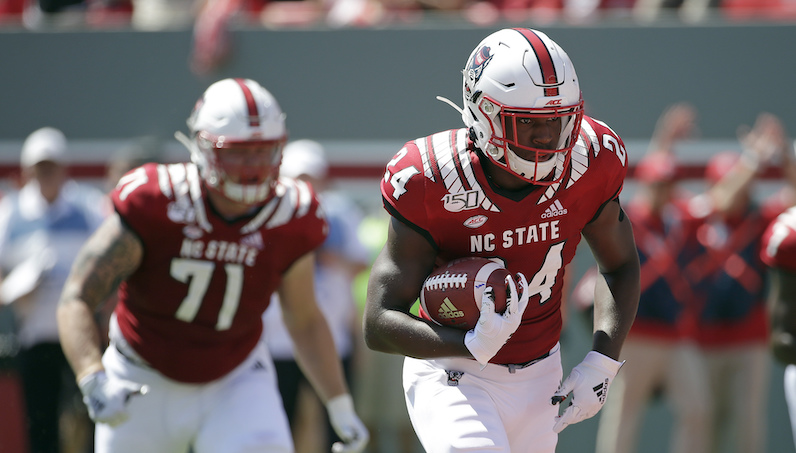 North Carolina State running back Bam Knight (24) runs for a touchdown during the first half of an NCAA college football game against East Carolina in Raleigh, N.C., Saturday, Aug. 31, 2019. (AP Photo/Gerry Broome)

Bam Knight is at the heart of why expectations remain optimistic for NC State’s offense in 2021. There’s plenty of excitement surrounding the return of Devin Leary; he’s the unquestionable leader at quarterback.

However, the amount of returning talent NC State has at the skill positions is notable. The loss of 6-foot-7 tight end Cary Angeline stings: 12 touchdown receptions, 15.7 yards per catch over three seasons with the Pack. But for the most part, NC State returns it’s heavy-hitters at wide receiver and in the backfield, led by Knight, who is arguably the top back in the league.

There is a three-way tie to be the most elusive RB returning to CFB (missed tackles forced / attempt):

(Just as a reminder: Frank Gore Sr. ran for 653 yards during the 2020 NFL season with the New York Jets. The man is timeless.)

Knight even took one kickoff return back for a touchdown — during the November loss to Miami. Going back to the 2000 season, Knight is one of only 28 FBS players to average 5+ yards per carry, run for 10 or more touchdown, catch 10+ passes and return at least one kickoff for a touchdown. The rest of that list includes Darren McFadden, Felix Jones, Michael Turner, CJ Spiller, De’Anthony Thomas, Chris Johnson, Todd Gurley and Saquon Barkley, among others.

There’s plenty of depth in NC State’s backfield; touches will be divided. Even with that in mind, though, it’s logical to expect a larger workload for Knight; his talent demands more opportunities. As more opposing defenses load up to stop Knight, Leary can work off that with a talented receiver group: Emeka Emezie, Thayer Thomas, Porter Rooks and Devin Carter.

If Knight is able to approach the 200-carry benchmark, he has a chance to become the next ACC back to average over five yards per carry, while rushing for 1,000+ yards. Dating back to the 2000 season, only 27 ACC players have run for 1,000+ yards, averaged 5.0+ yards per carry, run for 10+ touchdowns and caught 15+ passes. Knight could become the next guy.