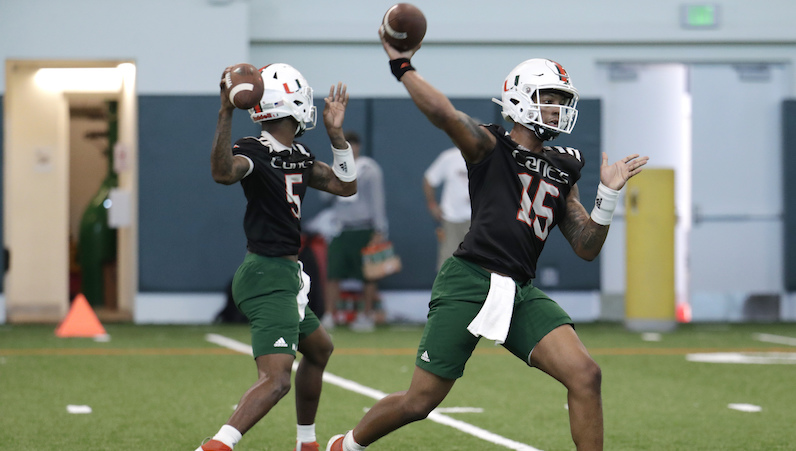 Miami opens up the 2019 season, looking to win another Coastal Division title, with a neutral-site contest against Florida. On Monday, first-year head coach Manny Diaz announced who will start for the Hurricanes in the opener in Orlando (Aug. 24) — redshirt freshman Jarren Williams.

Williams is the winner of a three-man race which included Ohio State transfer Tate Martell, who has struggled in offseason exercises, and N’Kosi Perry (six starts, 13 touchdown passes in 2018), who shared time at the position with Malik Rosier last season.

Congrats to @Jarren2Williams on winning the QB1 job at the 🙌🏽! #TNM https://t.co/FbLfN9Yh6g

Williams, a former 4-star prospect in the 2018 class, saw action in one game last season; in a win over Savannah State, he completed 1-of-3 passes and ran for a touchdown, too.

Perry certainly had some good moments last season for Miami; however, far too often, the team’s offense stalled, leaving the defense overtaxed. Martell was seen as as notable get when the Hurricanes landed his commitment this offseason. Alas, neither will

.@Coach_MannyDiaz on Jarren Williams named Miami starting QB: “We believe we can win w/all 3 guys. However we feel like Jarren has greatest upside due to his passing ability, his instincts & his determination.” Diaz said back-up role undecided b/w N’Kosi Perry & Tate Martell

When the Hurricanes and Gators meet up, it will be the first time those two programs have faced one another since the 2013 season — a 21-16 Miami win.

You can bet that Williams, when Miami goes to its aerial attack, will look for Jeff Thomas and Brevin Jordan. Thomas and Jordan ranked first (59) and second (48), respectively, on Miami’s roster last season in terms of targets.

With regards to the quarterback position, things can obviously change. However, based off who wins the backup job, plus several other factors — like how Williams plays against Florida, potentially — this is a position group worth keeping an eye on. A sudden departure wouldn’t come as a shock.