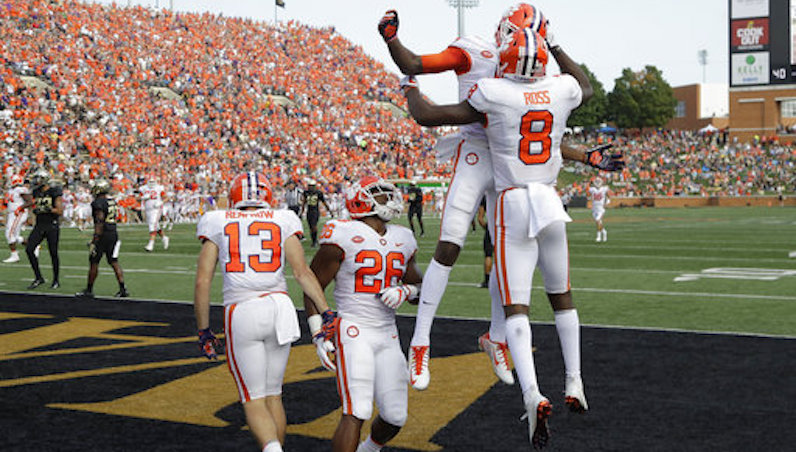 Clemson's Travis Etienne, back, celebrates his touchdown run with Justyn Ross (8) during the first half of an NCAA college football game against Wake Forest in Charlotte, N.C., Saturday, Oct. 6, 2018. (AP Photo/Chuck Burton)

One day after Clemson improved to 3-0 with a home win over Virginia, head coach Dabo Swinney announced some positive news: star receiver Justyn Ross has been cleared to lift weights again.

Back in early June, news broke that Ross would miss the entire 2020 season due to a spinal injury. Ross underwent surgery for the issue on June 5 — four months ago.

While Ross is out for all of 2020, signs are pointing in the right direction for his future. Ross wants to continue playing when he’s cleared; more will be determined after another check up in December, according to Grace Raynor of The Athletic.

Justyn Ross has been cleared to lift weights again, Dabo Swinney says. Big check up in December should give more clarity on his situation.

As a freshman, Ross hauled in 46 passes for 1,000 yards and 9 touchdowns, while helping push Clemson to a 15-0 record and a national title.

Working with Trevor Lawrence, Ross dominated in the championship victory against Alabama: six receptions for 153 yards and a touchdown. This followed another dynamic performance against Notre Dame in the opening frame of the CFP: six catches for 148 yards and 2 touchdowns

As a sophomore in 2019, Ross teamed back up with Tee Higgins on the perimeter; the 6-foot-4 wideout snagged 66 passes for 865 yards and 8 touchdowns.

Ahead of Miami matchup, Clemson remains No. 1 in AP Poll