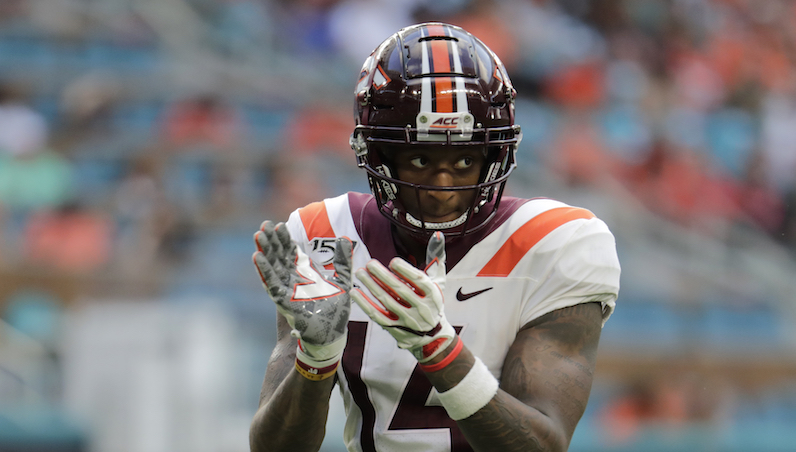 Obviously, a good deal of noise has been made about Virginia Tech’s changing of the guard at the quarterback position. It’s a newsworthy development — one that’s greatly altered the arc of VT’s season. Ryan Willis threw for over 2,700 yards and 24 touchdowns last season; in his place, both Hendon Hooker and Quincy Patterson — gutsy in Tech’s miraculous six-overtime win over UNC — have added serious juice to the quarterback position. Those two have also benefitted from the returns of wideouts Damon Hazelton Jr. and Tre Turner.

With Virginia Tech now at 5-2 (2-2 ACC) and the Coastal Division wide open, Hazelton and Turner have an opportunity to push the Hokies back to prominence.

Before the season, Hazelton and Turner lurked as one of the more dynamic wide receiver duos in the ACC. However, things started off slowly. Hazleton missed the first three games — a loss to Boston College, and somewhat shaky wins over Old Dominion and Furman — with a hamstring injury.

After a season in which he saw 92 targets, Damon Hazelton returns as a top target at Virginia Tech. pic.twitter.com/XUdYKnUbkd

In his return against Duke, the Hokies lost badly, 45-10, but Hazelton had Virginia Tech’s lone offensive play of note: a 72-yard touchdown catch.

Turner, on the other hand, played in Virginia Tech’s first four games, and posted solid numbers. He was injured, though, against Duke, which forced him to miss the game at Miami. Turner was available to play against Rhode Island, and he dressed, too; however, the Hokies elected to hold him out, again.

With Turner on the sideline, Hazelton got after it. The redshirt junior caught five balls for 93 yards and two touchdowns.

That was the first multi-touchdown game of Hazelton’s college career. A week later, Hazelton followed that up with another two-touchdown performance against North Carolina.

So if you’re doing the math at home, the win over North Carolina was just the second game all season that Hazelton and Turner have taken the field together — and the first time with full health. While Hazelton went for two scores, Turner was busy in his return, too: five catches, which tied a career high, for 106 yards and a touchdown. This is the first 100-yard receiving game of Turner’s career at VT.

Virginia Tech leads in the ACC in red zone conversion offense. Down at Miami, the Hokies benefitted from turnovers and excellent field position, converting all six of their red zone trips into touchdowns.

In home wins over Rhode Island and North Carolina, three of Hazelton’s four touchdown grabs have come from inside 20 yards. At 6-foot-2, with good ball skills, Hazelton is a tantalizing target near the goal line, especially in jump-ball situations.

(Also: give credit to Willis here, who came in cold off the bench after a nasty leg injury to Hooker, and hit Hazelton for six. After which, Patterson took over.)

In leverage situations, Hazelton has quickly become Virginia Tech’s top target. He now has four catches this season on 3rd or 4th down, all of which have gone for touchdowns.

His first touchdown grab yesterday came on 3rd-and-goal from the 11-yard with less than 20 seconds before halftime. However, it’s his second touchdown snag that will likely be remembered for a long time in Blacksburg.

On a 4th-and-3 play, trailing by seven in the second overtime, the Hokies, once again, targeted Hazelton on lob play in the end zone. Hazelton gets outside leverage and Greg Ross never turns around the locate the football. Patterson’s ball is a little flat, but right on target — the first touchdown toss of his college career. Ultimately, this play helped forced a third overtime and kept Tech alive.

This has been a balanced team effort, though, for the Hokies. In recent weeks, Virginia Tech has received major efforts from other skill guys, like veteran running back Deshawn McClease. Over the last four games, McClease has two 100-yard rushing performances. In the win over UNC, McClease racked up 91 total yards on 14 touches; he also had two-yard rushing touchdown.

The versatile Dalton Keene struggled against UNC, but he had four touchdown receptions in the previous two games, including three scores in the wild win at Miami.

Prior to UNC win, Virginia Tech ranks No. 8 in ACC Power Rankings