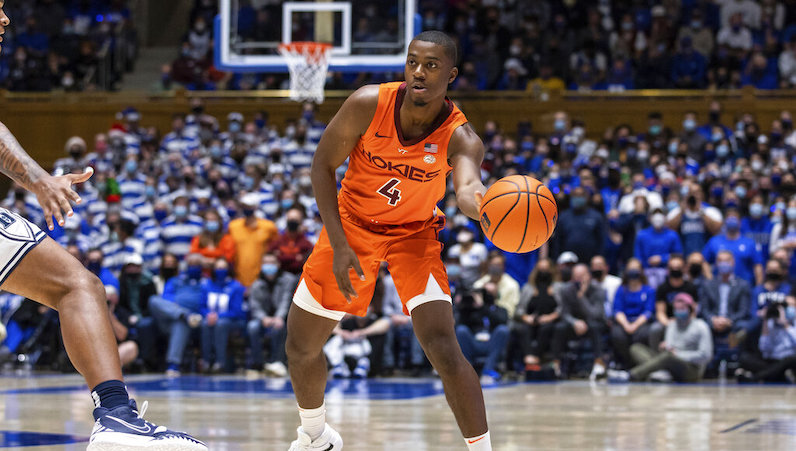 Nahiem Alleyne, one of the top shooters in the ACC, will enter the NCAA transfer portal after three seasons with Virginia Tech. Alleyne played in every coach Mike Young coached at Virginia Tech.

A three-year starter, Alleyne appeared in 90 games, making 84 starts. For his career, Alleyne averaged 9.7 points and 1.5 assists per game. Alleyne has 871 career points to go along with 153 3-pointers, one of the top marks in program history.

This made Alleyne an excellent fit for Young’s detailed half-court offense, which features a variety of off-ball actions designed to target the 3-point line.

Young did a really nice job blending the shooting skills of Alleyne and Hunter Cattoor, one of the top movement shooters in the country. Here’s some Floppy action between Alleyne and Cattoor — with Alleyne flying out for an open 3.

Alleyne really is a pure catch-and-shoot player, although he can handle the ball some on second-side actions: pick-and-rolls and dribble-handoffs.

On this possession, Alleyne runs Chicago action (pindown screen into a DHO) with Justyn Mutts; he turns the corner and finishes in the paint.

He’s a great free throw shooter (80.7 FT% career), but Alleyne doesn’t get to the rim all that much, nor does he create a lot of fouls.

Losing Alleyne is a tough blow. However, the Hokies have a piece waiting in the wings to shoulder a larger load on offense: Darius Maddox.

Should be in the conversation for ACC 6MOY

Maddox provides a lot of the same movement shooting capabilities as Alleyne.