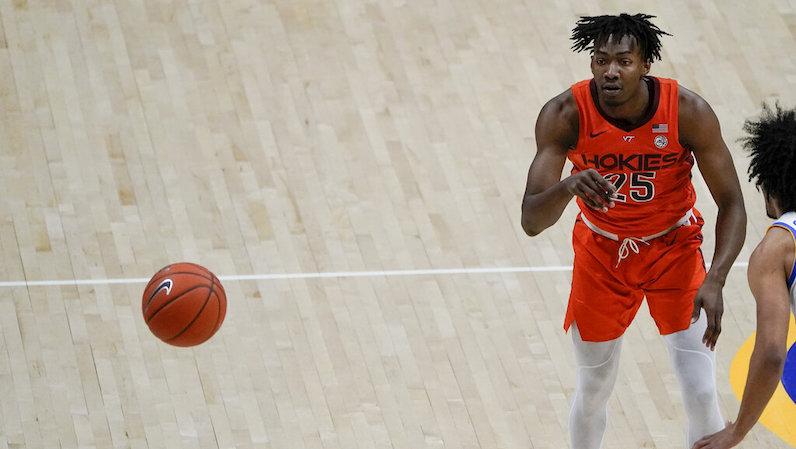 Last week, I wrote extensively about Virginia Tech and veteran forward Justyn Mutts. Since then, VT has won three more games. The Hokies are a collective force. Mike Young has an excellent starting lineup, backed within the framework of a quality nine-man rotation. Every piece matters, and Young is the perfect coach for this bunch: he gets his teams to play above the sum of their individual parts.

Mutts, however, is on another level right now. The 6-foot-7 forward is playing incredible two-way basketball; however, I’d like focus on his defense.

Virginia Tech is one of the most connected teams in the country — just watch them play. The Hokies move with rhythm on offense and rotate with precision on defense. It can be hard to find creases or gaps in Virginia Tech’s defense; the help efforts come quickly when needed.

Virginia Tech has pretty good personnel for when it wants to switch on defense, too. Mutts is the lynchpin when the Hokies switch, though.

He can fly around and guard every position on the floor. As nice as the blocks and steals are, Mutts is willing to do the less glamorous stuff as well. Mutts works tirelessly to contests as many jump shots as possible when he’s the primary defender, which is an incredibly valuable skill for winning ball games.

It’s a little insane to make these types of proclamations only 3-4 games into the season, but Mutts is the early favorite for ACC Defensive Player of the Year. (Virginia’s Reece Beekman is definitely in that conversation, too.)

How Louisville is utilizing the new dimensions of Jae’Lyn Withers