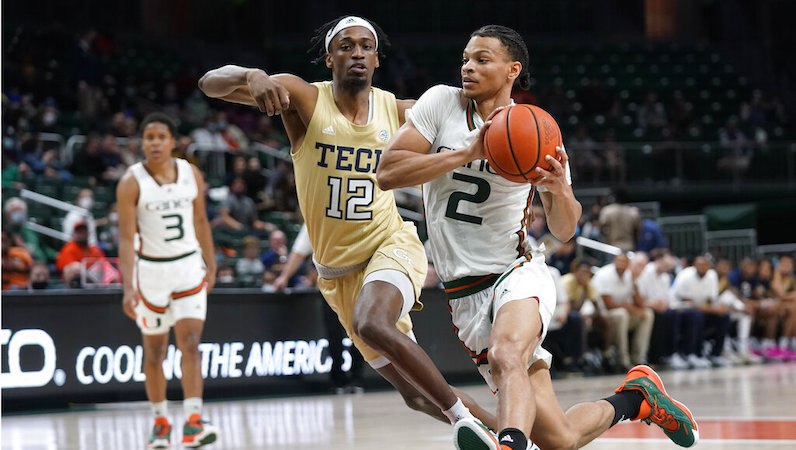 No time to waste. Let’s just right in on this week’s ACC Power Rankings.

The Blue Devils shook off a last-second defeat on Monday vs. Virginia to grab road wins over Clemson and Boston College.

This three-game stretch marked a nice run of play for Trevor Keels. The freshman guard averaged 16.7 points, 6.3 rebounds, 5.3 free throw attempts and 1.7 assists per game, while shooting 54.8 percent from the field (45.5 3P%).

Keels operated efficiently with and without the basketball, like this cut layup of a Theo John post feed. As usual, Keels found ways to pressure the rim: 10-of-14 on attempts at the basket.

After dropping games to Notre Dame and Virginia, Miami rebounded with a 2-0 week — wins over Georgia Tech and Wake Forest.

Miami’s offense led the way for victory in Winston-Salem; Isaiah Wong was in his bag (20 points, 8-of-12 2PA), as was Kameron McGusty (22 points, 3-of-5 3PA). With that said, the Hurricanes got a boost from their defense, too.

All season long, ACC opponents have been flummoxed by Wake Forest’s Alondes Williams, a power guard with wizard-like handles and passing abilities. Miami opted to guard the pick-and-roll by trapping or showing hard vs. Williams.

Williams still did plenty of damage; the league’s top guard scored 25 points and shot 5-of-8 on attempts at the rim. Those double teams caused issues, though. Williams turned the ball over seven times. Overall, Wake Forest posted a turnover rate of 24.8 percent.

Whether it was Sam Waardenburg or Anthony Walker, Miami (for the most part) made Williams see two guys while coming off ball screens.

After scraping by Louisville for a mid-week win, Notre Dame took its show on the road; the Irish posted one of their top offensive performances of the season, too, winning 76-61 at Clemson.

Mike Brey’s club has won 14 of its last 16 games, including four in a row.

Even with Miami’s trap initiative, Wake Forest still put up pretty good offensive numbers: 9-of-21 on 3-point attempts and 19-of-30 on 2-point shots. The solution to slowing Wake Forest’s offense isn’t as simple as: trap Alondes Williams.

Steve Forbes has plenty of secondary options at his disposal; the Demon Deacon can exploit 4-on-3 advantage situations.

Daivien Williamson is great source of secondary playmaking and shooting. Isaiah Mucius (37 3P%) is a good shooter off movement. Jake LaRavia is one of the top middle-of-the-floor playmakers in the country. Unfortunately, due to foul trouble, LaRavia saw the floor for only 22 minutes vs. Miami.

For opponents that double on the ball vs. Williams, the purpose is two-pronged: force turnovers and, at the least, get the ball out of his hands.

Williams, however, has the ability to avoid those traps, altogether. That process starts with his special ability to get north-south without the use of a ball screen. According to Synergy Sports, Williams has scored above 0.9 points per isolation possession this season.

Of course, Williams can also use his strength by playing with his back to the basket.

The Demon Deacons would have Williamson come over and set a 1-2 screen (guard-guard) for Williams. When the Hurricanes switched the action, Williams would take either Charlie Moore or Bensley Joseph down to the block.

From there, Williams could scan the floor and look to score, draw a foul or spray to weak-side shooters when help defenders learned in his direction.

Even against a set gap-based/pack-line defense, like Virginia or Louisville, Williams will find his teammates for good looks.

Williams has shown this season that he sees the weak-side of the floor as good as any prospect in the country. He’s a one-man show for creating open spot-up 3-point attempts.

Virginia followed Monday’s thrilling win in Cameron Indoor with a solid home victory over Georgia Tech. Once again, Jayden Gardner made his presence felt as one of the top midrange players in the ACC.

Over the weekend, Gardner went for 26 points vs. Georgia Tech, which included 6-of-11 shooting from the midrange.

In terms of ACC players who do damage while operating at the nail/high-post, Gardner is up there with Duke’s Paolo Banchero and Jake LaRavia of Wake Forest

Beekman is known for his on-ball defense, but the sophomore guard is an elite chase defender, too.

As the rivals get set for a rematch in Blacksburg, Mike Young will need Cattoor to shake loose and spark the half-court offense.

Syracuse saw a four-game winning streak snap as its offense hit the skids at Virginia Tech: 59 points, 0.90 points per possession.

Playing for the first time sans center Jesse Edwards, Syracuse was unable to pressure the rim vs. Justyn Mutts, who went for a triple-double, and the Hokies: 1-of-4 free throw attempts, 5-of-14 field goal attempts at the basket.

Sophomore center Frank Anselem did record a career-best 15 rebounds, though.

Leonard Hamilton likes to play with a deep rotation, but the veteran coach has been forced to use more guys than he’d like in recent weeks. Injuries have just crushed this team.

After a tough outing during the loss to Pitt, freshman wing Matthew Cleveland responded at UNC: 13 points, 2 steals and a block.

The Tigers are now down to 4-10 in conference play, including four straight defeats. Despite the lack of results, Clemson continues to compete and run well-structured half-court offense.

PJ Hall gives Brad Brownell a game-breaker in the middle of the floor, but the Tigers are incredibly regimented on the offensive side. This team runs sets just about every trip down the floor; the results, for the most part, are there, too.

The Cards fell short against Notre Dame, but at least Louisville received the most-inspired effort its seen from Jae’Lyn Withers this season, so far. Withers has been coming on in recent weeks, which is encouraging.

After a strong redshirt freshman season, Withers has struggled mightily this year. Withers, however, shook off the rust and went for a season-high 20 points (8-of-13 2PA) and 3 steals vs. The Irish.

DeMarr Langford followed up a 14-point performance vs. Syracuse with a rather busy outing against Duke. The sophomore wing (24 percent usage) scored 16 points, while also collecting 2 steals and 2 blocks.

During the month of February, Georgia Tech has yet to scored above 1.0 points per possession. The Yellow Jackets rank 313th nationally in free throw attempt rate; Jordan Usher and Michael Devoe are the only rotation players drawing at least 3.0 fouls per 40 minutes.

Currently, Georgia Tech ranks No. 234 nationally in adjusted offensive efficiency, according to KenPom.

During the FSU game, star center John Hugley struggled; however, the big fella bounced back against a weakened Wolfpack frontline. Hugley went for 21 points (13-of-15 FTA), 10 rebounds, 6 assists, 2 steals and 2 blocks.

Hugley has drawn fouls at a rate of 7.1 per 40 minutes during conference play, which is tops in the ACC.

Kevin Keatts is still the man for NC State, but things are getting bleak, quickly.

Context is important; this NC State team isn’t playing with a full deck, unfortunately. However, the Wolfpack have now lost six straight, including two performances last week: an 18-point defeat at home to Wake Forest, then a loss at Pittsburgh.

This marked NC State’s first loss to Pitt since 2014.