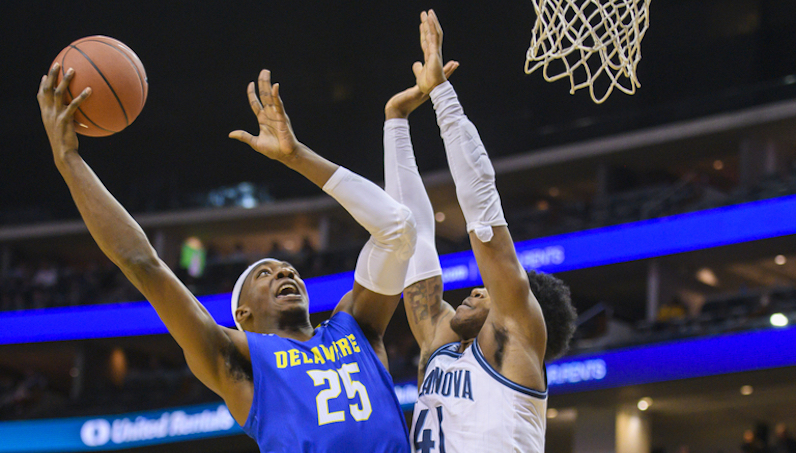 According to a report from Jeff Goodman of Stadium, Virginia Tech basketball has plucked another graduate transfer: Delaware forward Justyn Mutts.

Virginia Tech will be the third and final stop on the collegiate level for Mutts, who started his career at High Point. During the 2017-18 season, Mutts played in 28 games for HPU (19 starts); after which, he transferred to Delaware. As a redshirt sophomore this season, Mutts averaged 12.2 points (53.8 FG%), 8.4 rebounds, 2.2 assists and 1.3 steals per game.

The 6-foot-7 Mutts gives the Hokies another inside presence on both ends of the floor. Mutts posted a defensive rebound rate of 22.3 percent this season (No. 129 nationally), per KenPom. Vacillating between the power forward and center positions, Mutts shot 63 percent at the rim this season — with 20 dunks. Mutts shot 48 percent on post-up attempts, too, according to Synergy Sports.

This is a strong win for Virginia Tech in the transfer portal; several other ACC programs, like NC State and Wake Forest, expressed interest in Mutts. Ultimately, though, Mutts picked Virginia Tech over Mississippi State and Houston.

In Mike Young’s first season at Virginia Tech, the Hokies utilized plenty of small-ball lineups; most of those groups featured Landers Nolley, now at Memphis, as the de facto power forward. In general, the Hokies were smaller across the board, including at the center position with 6-foot-6 PJ Horne; Virginia Tech ranked nearly dead last in nationally weighted height: No. 344 in Division I. The Hokies also ranked 340th in offensive rebound rate: 21 percent.

To address these needs, Virginia Tech added Iowa grad transfer Cordell Pemsl — a 6-foot-9 power forward/center — back in April.  After redshirting this season, Wofford transfer Keve Aluma — who followed Young to VT — will join the rotation.

There’s defensive upside with Mutts, which extends beyond his work on the glass. Mutts also averaged 1.6 steals and 1.3 blocks per 40 minutes. During the 2019-20 season, Mutts was the only player in the CAA with 20 percent defensive rebound rate, 3 percent block rate and 2 percent steal rate.

On the ball: Diarra looks to transform the Hokies half-court offense from the point guard position