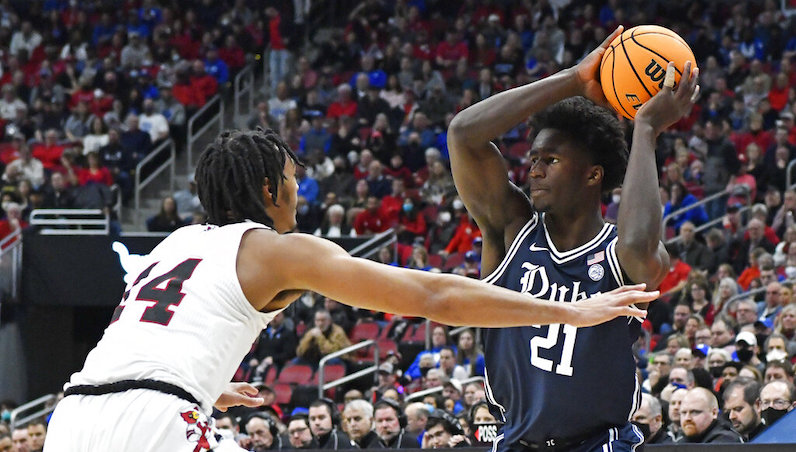 Duke survived a midweek scare vs. Clemson, then went on the road to play Louisville in its first game sans Chris Mack — in front of a fired-up KFC Yum! Center. The Blue Devils withstood an inspired performance from the Cards, winning 74-65.

Once again, Jeremy Roach filled in for the injured Trevor Keels. Roach played well, too: nine points, five assists and only one turnover.

This is good processing from Roach, who was a steady force in Duke’s half-court pick-and-roll attack.

One of the keys to Duke’s victory was the team’s off-ball movement; the Blue Devils weren’t stagnant on offense. They kept moving around, cutting behind Louisville’s defense for points.

The development context for Griffin in Durham has been fascinating; this is a likely top-7 pick in the 2022 NBA Draft that largely plays off the ball. Duke’s offense generally flows through Paolo Banchero, Wendell Moore Jr., Keels and Roach.

Griffin has embraced and excelled within this role.

According to Synergy Sports, Griffin has an effective shooting rate of 76.7 percent on catch-and-shoot attempts, which ranks inside the top 15 nationally (40+ possessions).

It’s easy to notice Griffin’s step-back 3-point shooting, which is awesome; however, his abilities as a cutter and movement shooter speak to his well-rounded offensive game.

The Hurricanes won those two games despite some frigid shooting from star guard Isaiah Wong.

As usual, though, Jim Larranaga was able to count on George Mason transfer forward Jordan Miller, one of the top role players in the ACC.

Miller was the team’s MVP at Virginia Tech: 18 points (2-of-4 3PA), seven rebounds and two blocks. Miller also shot a combined 9-of-9 on shot attempts at the rim vs. Virginia Tech and Georgia Tech.

Notre Dame kept it rolling last week. The Irish have won 10 of their last 11 games, including four straight victories.

Senior wing Dane Goodwin is in the midst of a special season as well. Goodwin splashed four 3-pointers en route to 16 points vs. Virginia. Goodwin has connected on 48-of-96 3-point attempts: 50 percent 3-point shooting, one of the top numbers in the country.

Notre Dame’s offense has scored 1.1 points per spot-up possession this season, which ranks No. 7 nationally, per Synergy Sports.

Wake Forest spanked Boston College last Monday, 87-57. However, when the Demon Deacons hit the road for Syracuse over the weekend, their performance was less than optimal.

Simply put: Wake Forest had its worst defensive game of the season. Syracuse scored 1.44 points per possession and 94 points in the game — both of which are season lows for the Deacs.

A home matchup with Pittsburgh on Wednesday offers a nice bounce-back opportunity, though.

Well, well, well: what a difference a week makes, huh?

Seven days ago, the sky was falling in Chapel Hill; the Tar Heels were coming off back-to-back losses against Miami and Wake Forest. In both of those games, Hubert Davis saw his defense burned to a crisp.

North Carolina responded, though. UNC posted three straight wins in the span of six days — punctuated by a 100-80 victory over NC State on Saturday. During the NCSU win, UNC drained 15-of-27 3-point attempts and scored 1.33 points per possession, a season high.

As he continues to build on his All-ACC sophomore season, Caleb Love was sensational in this three-game stretch.

Love averaged 19.7 points per game last week, while shooting 9-of-18 from beyond the arc. The sophomore is now shooting 43.2 percent on his 3-point attempts, up from 26.6 percent last year.

During the VT win, Love went 9-of-11 from the free throw line. It was the first time since November that Love attempted 10+ free throws in a game.

The loss of veteran forward/center Malik Osborne is massive for Florida State, which dropped two games last week — both by double-digits.

The loss up in South Bend was disappointing; however, this was another encouraging offensive performance from Reece Beekman.

Beekman leads with his defense, but his game on offense continues to evolve, too. The sophomore is still shooting above 40 percent from downtown in ACC play (40.7 3P%), which is great to see.

During his second season in Charlottesville, Beekman has shown an improved ability to get downhill and into the paint with his dribble as well. That’s a massive development.

Beekman’s downhill drive game isn’t fully-formed, but he’s shooting 60.9 percent at the rim, overall, with 68 percent of his makes coming unassisted, including this dunk over Blake Wesley.

After shooting 48.3 percent at the rim last year, with only three dunks, Beekman now has 11 dunks on the season.

Virginia Tech followed up a disappointing road loss at UNC with a quality 85-72 victory over Florida State. Freshman reserve guard Sean Pedulla was excellent at FSU: 20 points (6-of-7 3PA). However, Cattoor was the star on Saturday.

One of the top two-way wings in the ACC, Cattoor drained 9-of-11 3-point attempts — scoring a career-high 27 points and blocking two shots. The nine 3-pointers tie a single-game program record, too.

Virginia Tech simplified its offense for the matchup with FSU’s size and switch-heavy scheme. The Hokies spread the floor, orchestrated the preferred switch with a couple of ball-screen tactics and then looked to play drive-and-kick basketball.

Cattoor and his lightning quick release were the stars of this approach. For the season now, Cattoor is shooting 49.6 percent on 3-point attempts.

It’s been a tumultuous season for Louisville basketball. Once again, interim head coach Mike Pegues is being asked to do a lot. Quick salute to Pegues, who is showing why he needs to be a permanent head coach sooner, rather than later.

This is a reductive thing to say, but Syracuse is a make-or-miss team.

The defense is bad and not good enough to sustain a power outage on offense. In addition, Syracuse’s offense doesn’t really pressure the rim. Therefore, the Orange need their jumpers to hit. That’s how they create efficient offense.

After a brutal shooting performance at Duke, Buddy Boeheim responded at Pittsburgh (25 points) and in the home win over Wake Forest. Boeheim drilled six 3-pointers and pumped in 30 points vs. the Demon Deacons.

As a random aside, I was on press row at Duke for the Clemson game. The Tigers run a lot of good half-court actions, including this set: Horns Gut Chicago.

Clemson starts in a Horns alignment; one big (Hunter Tyson) drops to the baseline, while the other big (PJ Hall) lifts and sets a ball screen for Al-Amir Dawes. Tyson then sets a cross screen along the baseline for guard Alex Hemenway, who lifts up through the middle of the lane (Gut action) and off a handoff from Hall.

Brad Brownell and his staff referred to this action as “Spoelstra,” which appears to be an ode to Miami Heat coach Erik Spoelstra, one of the top offensive minds in the NBA.

During a Jan. 2021 matchup with Duke last season, Clemson ran this exact same action for Hemenway.

Back to this season: the Tigers have two key opportunities this week to pick up victories: home to FSU and at Georgia Tech.

Led by Dereon Seabron and Terquavion Smith, NC State’s offense has been quite good this season; the Wolfpack rank No. 40 nationally in adjusted offensive efficiency, per KenPom.

The defense, however, has been super bad. Obviously, the loss of Manny Bates is huge, although Ebenezer Dowuona has battled and blocked his fair share of shots.

In terms of pick-and-roll positioning, Dowuona isn’t perfect, though. When he sits, things get especially dicey for the Wolfpack.

You also get the feeling, when watching Seabron, that he could be a disruptive force on defense. He’s long and rangy. However, he’s shouldering such a massive load on offense — 27.2 percent usage rate, 20.2 percent assist rate — that it impacts his defensive output.

It’s really hard to play 36 minutes per game, carry an offense and be locked in defensively.

During both games, Jordan Usher worked well as a distributor: 11 combined assists. Next to Michael Devoe, Usher has been Georgia Tech’s second best player this season and one of the better all-around players in the ACC.

Salute to Earl Grant and Boston College, which continues to fight. After losing back-to-back games on the road — Wake Forest and UNC (by a combined 41 points) — the Eagles returned home and defended their floor. Literally.

Boston College’s defense was solid in the win over Pitt, especially against star center John Hugley.

The Eagles now have four ACC wins this season, including victories over Notre Dame, Virginia Tech and Clemson.

With Hugley held in check (9 points), Pitt suffered an offensive power outage at Boston College. The Panthers scored 56 points (0.88 points per possession) and lost for the 13th time this season.

Is Kenny Payne the frontrunner for the Louisville job?