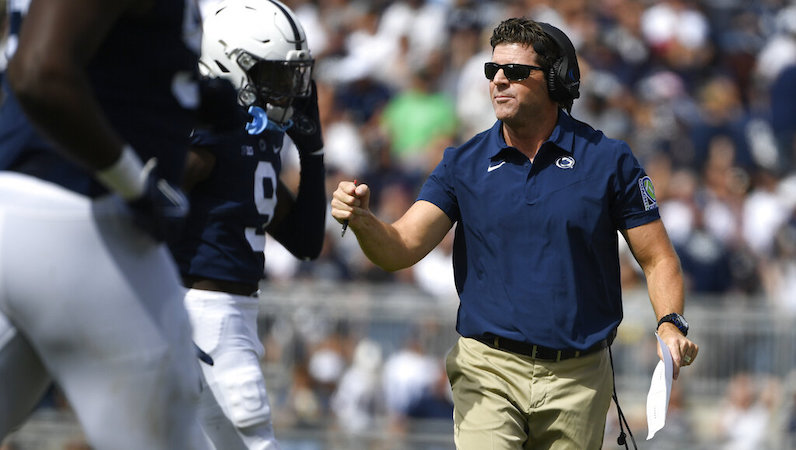 Brent Pry is the next head coach of Virginia Tech football.

Two weeks back, Virginia Tech parted ways with former head coach Justin Fuente, who ran the program for six seasons (2016-21). Over the following fortnight, plenty of names emerged as potential candidates for the Virginia Tech job, including some with ACC connections: Clemson coordinators Brent Venables and Tony Elliott.

However, Virginia Tech AD Whit Babcock elected to go with Pry, who will exit a successful stint as Penn State’s defensive coordinator. Pry quickly moved from frontrunner to hire.

Pry, 51, has been an assistant coach in college football for the last 30 years. During that stretch, he worked as a graduate assistant for three seasons at Virginia Tech (1995-97), working under Frank Beamer.

Later in his arc, Pry spent three seasons with James Franklin at Vanderbilt (2011-13); after that, Pry followed the head coach up to Happy Valley. Ahead of the 2014 season, Pry became Penn State’s associate head coach, co-defensive coordinator and linebackers coach. (Coaching linebackers is his specialty.)

Under his tutelage, Pry’s defenses have routinely been among the best in college football, while also producing high-level pro talent. Over the last dozens seasons, Pry directed eight defenses that ranked inside the top 25 nationally in total defense.

Currently, Penn State ranks No. 10 in the FBS in ESPN’s defensive efficiency metric.

Once Pry hits the ground running and assembles his staff, there will obviously be a lot of work to do. However, a priority will be tightening recruiting borders within his own state, especially in the 757.

While Virginia Tech sputtered, other out-of-state programs have capitalized and successfully recruited within Virginia. The return of Mack Brown to North Carolina — buoyed by the recruiting prowess of Dre Bly, a Tidewater product himself — turned into a real existential threat for the Hokies.

This sets up a new key battleground within the ACC’s Coastal Division: Brent Pry and Virginia Tech vs. Mack Brown, Dre Bly and UNC.