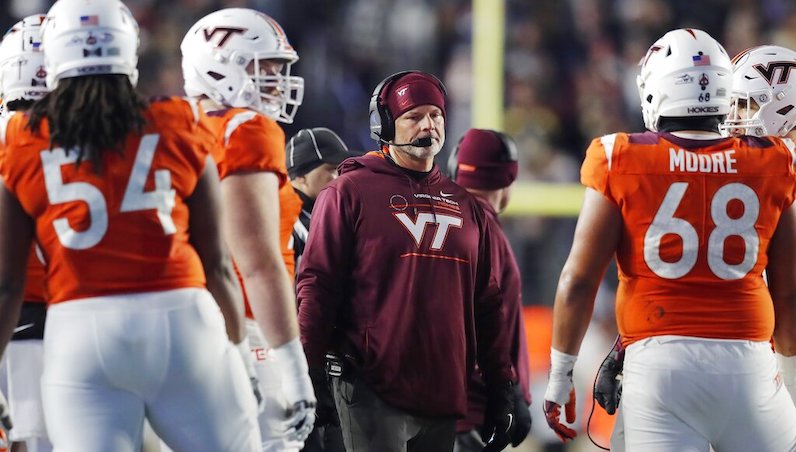 Virginia Tech head coach Justin Fuente on the field during a timeout in the second half of an NCAA college football game against Boston College, Friday, Nov. 5, 2021, in Boston. (AP Photo/Michael Dwyer)

According to a release from the university, Virginia Tech and football coach Justin Fuente have agreed to mutually part ways. Fuente spent the last six seasons in Blacksburg with Virginia Tech — after arriving from Memphis.

Virginia Tech AD Whit Babcock won’t wait until the 2021 season concludes to start a national search to replace Fuente. Assistant coach J.C. Price will be the interim coach for the remainder of the 2021 season.

During his time with the Hokies, Fuente compiled a 43-31 record. The Tulsa, Oklahoma native owns a 69-54 career record during 10 seasons as an FBS head coach.

The Hokies are 5-5 (3-3 ACC) this season. Virginia Tech next plays this Saturday vs. Miami. Fuente’s win game with VT was a blowout win over Duke.

Fuente’s time with VT started off well. In the 2016 season, Virginia Tech won 10 games, including the Belk Bowl, and claimed a Coastal Division title. One year later, the Hokies won nine games and again finished the season in the AP Top 25.

Fuente steered the #Hokies to the Coastal Division title in his first season, but in the last four years, Virginia Tech is 24-23, 17-15 in the ACC. https://t.co/KsveD4k10N

In the 2019 season, though, Virginia rebounded: eight wins and another Belk Bowl appearance. The reprieve was only temporary, however.

Defensive coordinator Bud Foster, who stayed on staff during the transition from Frank Beamer to Fuente, retired after the 2019 season.

The 2020 season, in the midst of the COVID-19 Pandemic, produced another losing campaign for Fuente: 5-6. Following the season, Babcock announced that Fuente would return for the 2021 season, much the chagrin of large chunks of the fanbase.