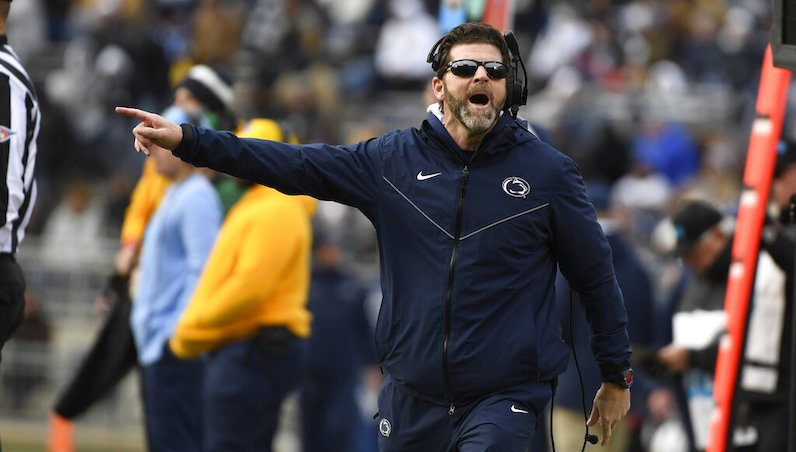 This won’t be an easy process, and it’s one Babcock must get right. Some of the top openings in college football have already been filled. However, some of those moves created job searches for other power programs. Lincoln Riley accepted an endless supply of money to leave Oklahoma for USC. Brian Kelly will leave Notre Dame for LSU.

Now, Oklahoma and Notre Dame will go hunting for their next coaches. Meanwhile, Florida hired Billy Napier away from Louisiana at Lafayette.

Along with all of that, several other big-name candidates agreed to extensions with their current schools. James Franklin signed a massive extension with Penn State on Nov. 23: 10 years, $85 million. (The money numbers associated with these deals are truly insane.) Three days later, Dave Clawson and Wake Forest agreed to an extension as well.

As Virginia Tech prepares for the post-Fuente era, here are several names to keep an eye on.

Chadwell, who hails from Tennessee, has been a college football coaching presence in the region for two decades, now. However, he’s best known for his work running the Coastal Carolina program, which he took over on a full-time basis in Jan. 2019. (Previously, Chadwell served as the team’s interim coach in the 2017 season, too.)

During his time as Coastal Carolina’s head coach, Chadwell has gone 29-19, while building the program into a top-25 unit and one of the premier Fun Programs in the country.

Penn State defensive coordinator Brent Pry has emerged as the favorite for the job, though. This would be a return of sorts for Pry, who worked as a graduate assistant under Frank Beamer in the 1990s (1995-97) at Virginia Tech.

Since then, Pry has continued to work as a high-level assistant coach in college football — for close to 30 years.

After spending three seasons with James Franklin at Vanderbilt (2011-13), Pry followed the head coach up to Happy Valley. Ahead of the 2014 season, Pry became Penn State’s associate head coach, co-defensive coordinator and linebackers coach. (Coaching linebackers is his specialty.)

Over the last 12 seasons, Pry helped assemble eight defenses that ranked inside the top 25 nationally in total defense.

Sources: Virginia Tech’s search has focused in on Penn State DC Brent Pry. No deal is done yet, but the hire is expected to happen soon.

Other ACC Names of Note

A couple other intriguing names with ACC ties emerged as possible, yet perhaps unlikely, candidates for the Virginia Tech job, too.