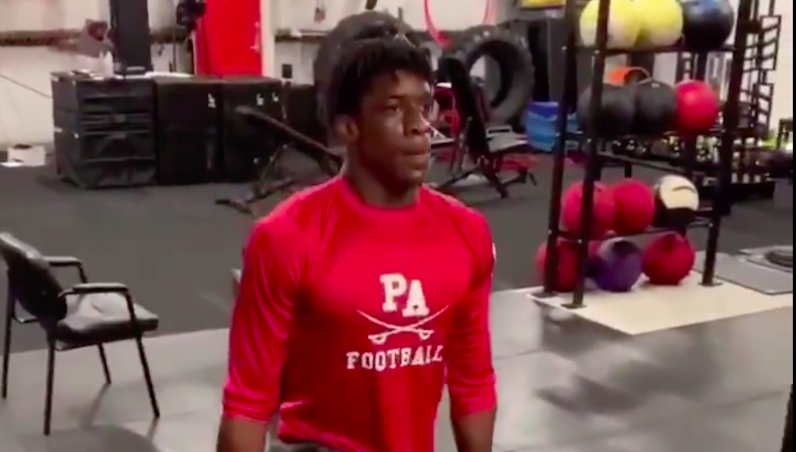 North Carolina lands one of the top prospects in the 2021 recruiting class, 5-star cornerback Tony Grimes

Tony Grimes, the No. 1 cornerback in the 2021 recruiting class, committed to North Carolina on Tuesday. This is one of the biggest recruiting decisions in program history for the Tar Heels.

When it comes to life on the recruiting trail, North Carolina and Mack Brown continue to experience a charmed existence. The last few months are proof of just that; UNC has strung together a monster top-five recruiting class, built largely on in-state talent.

Grimes, however, is a bit of a different story. A native of Virginia, Grimes becomes the top-ranked prospect in arguably the greatest recruiting class in UNC history. The 6-foot, 180-pound cornerback, who plays prep ball for Virginia Beach (VA) Princess Anne, announced his decision live on CBS Sports HQ.

So @757EliteDB what now after committing to @TarHeelFootball?

The star-studded cornerback is the program’s highest-ranked recruit since Marvin Austin, way back in 2007. 247 Sports ranks Grimes as the No. 7 overall prospect in the class, too. In terms of team rankings, North Carolina’s class slots in at No. 3, behind only Ohio State and Clemson. (If North Carolina were to hang onto a top-five class ranking in 2021, landing Grimes was basically a requirement.)

UNC now has 17 commitments in its 2021 class, including 11 4-star recruits and eight players ranked inside the top 200 nationally. Six commits rank inside the top 150 nationally; that includes five defenders, led by Grimes.

A laundry list of big-time programs recruited Grimes, including Alabama, Clemson, Ohio State, LSU and Penn State, among others. In-state ACC programs Virginia and Virginia Tech offered, too, of course.

However, North Carolina — with a recruitment process led by Dre Bly, UNC’s cornerback coach — won out in the end. Grimes initially took a visit to UNC last July; he followed that up with another visit in November. (Bly is also a native of the Tidewater area in Virginia, which certainly didn’t hurt North Carolina’s chances.)

Tony Grimes is the highest-ranked defensive back to commit to any Mack Brown-coached team since the 247 Composite Rankings began (2000).

Back in the middle of June, North Carolina landed a commitment from 4-star defensive end Jahvaree Ritzie, a top-150 prospect in the 2021 class. As soon as Ritzie made his decision, Grimes became The Next Big Thing for UNC.

At various points of Grimes’ recruitment, Texas A&M and Ohio State emerged as leaders. But Grimes built a strong relationship quickly with North Carolina’s staff — a key factor. And sure enough, Brown and Bly got the job done.

While Grimes is currently a part of North Carolina’s 2021 class, he could (potentially) arrive in Chapel Hill sooner. If his high school football season is cancelled this fall due to the COVID-19 pandemic, Grimes will enroll at UNC in Aug. 2020.