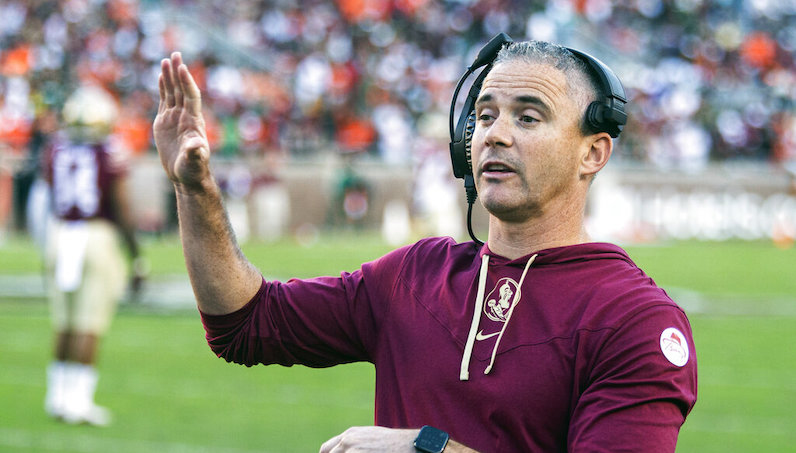 The ACC finds itself in an interest place with its head football coaches. After the 2021 season, four head jobs changed — one by surprise (Bronco Mendenhall, who resigned after Virginia’s loss to Virginia Tech), the other three were far more predictable: David Cutcliffe (Duke), Justin Fuente (Virginia Tech) and Manny Diaz(Miami).

Looking out, that’s four of 14 head coach slots that flipped within the span of a month late in 2021: 28.6 percent of the league’s jobs. Most of the guys that were on the proverbial hot seat last season lost their jobs; none of these departed coaches left for bigger jobs.

In fact, the one ACC coach that nabbed a major opportunity was former Clemson defensive coordinator Brent Venables, who took over at Oklahoma.

There are other coaches in the league with seemingly great deals of job secruity: Dave Clawson (Wake Forest), Pat Narduzzi (Pittsburgh), Mack Brown (UNC), Dave Doeren (NC State) and Dabo Swinney (Clemson). Outside of that group, though, there’s another mix of coaches that are in more of a “prove-it” capacity, like Jeff Hafley at Boston College.

Hafley is 12-11 (.522) across two seasons with the Eagles. The 2021 season fell short of expectations, but that was largely because Boston College overachieved in Year 1 of Hafley, then had to deal with a hand injury to star quarterback Phil Jurkovec.

The same could possibly be said for Scott Satterfield at Louisville, too, although Satt has likely coached and recruited his way to safer waters.

With that in mind, let’s take a look at the ACC head coaches who, entering the 2022 season, may very well be coaching for their jobs.