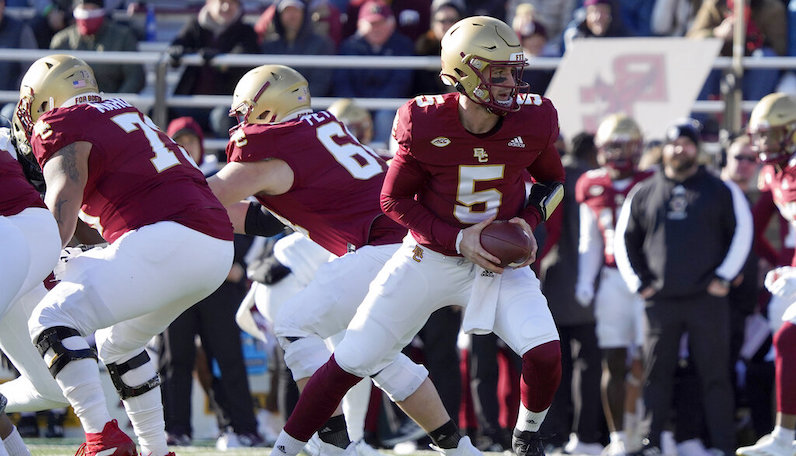 Boston College quarterback Phil Jurkovec (5) looks to hand the ball off during the first half of an NCAA college football game against Wake Forest, Saturday, Nov. 27, 2021, in Boston. (AP Photo/Mary Schwalm)

Boston College will return one of the top quarterbacks in the country next season: Phil Jurkovec.

According to a report from Pete Thamel, Jurkovec informed Boston Colleges that he will return for the 2022 season in Chestnut Hill, as opposed the entering the NFL Draft.

Sources: Boston College quarterback Phil Jurkovec has informed BC coaches he’ll be returning to school next year. He’ll be among the top quarterbacks NFL scouts will be watching in 2022 for the 2023 draft.

After transferring in from Notre Dame, Jurkovec put together a solid 2020 season. He threw for 2,558 yards and 17 touchdowns. At times, Jurkovec looked like a pro, playing under head coach Jeff Hafley.

Expectations were high for 2021; Jurkovec would once again team up with star wide receiver Zay Flowers. However, Jurkovec suffered an injury early in the season, missed time and Boston College’s season was never quite the same.

Now, Jurkovec will return to The Heights — with his sights set on a big 2022 season.