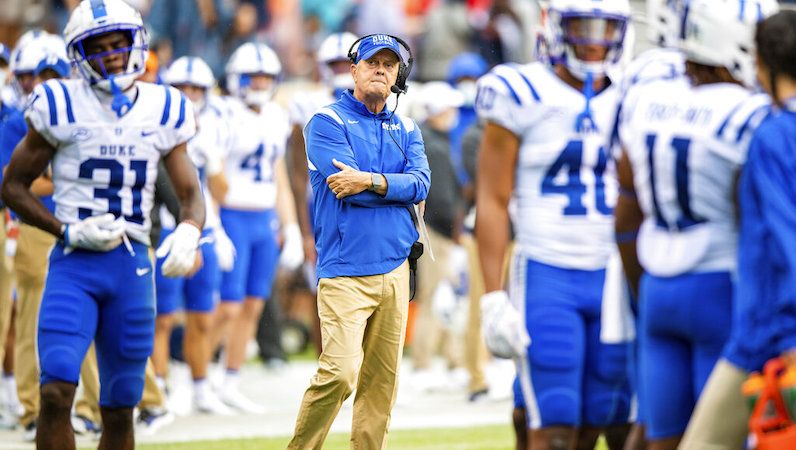 Duke Blue Devils head coach David Cutcliffe looks on during a timeout in the second quarter of an NCAA football game at Scott Stadium on Saturday October 16, 2021 in Charlottesville, Va. (AP Photo/Mike Caudill)

According to a report from Pete Thamel of Yahoo! Sports, retirement could be a possibility for Duke football coach David Cutcliffe at the conclusion of the 2021 season.

Following a blowout loss to Virginia Tech this weekend, 48-17, Duke fell to 3-7 on the season. The Blue Devils are in line for their third straight losing season.

Cutcliffe started coaching football in the 1970s. He started in the high school ranks, but quickly moved up to the staff at Tennessee, arriving in Knoxville in 1982. Cutcliffe climbed ladder at Tennessee. He eventually became the program’s quarterbacks coach offensive coordinator during a glorious run in the late 1990s.

Known as a savvy creator of offense, Cutcliffe is an important figure college football coaching circles. He took over at Duke ahead of the 2008 season — looking to lead a rebound for one of the most moribund programs in Division I football.

It took Cutcliffe a few years to get things rolling, but he quickly upped the program’s recruiting efforts. During the 2012 season, he took Duke to it its first bowl game since 1994.

The 2013 season was a massive breakthrough for the Blue Devils. Duke won 10 games and the Coastal Division. The Blue Devils finished the season ranked 23rd in the AP Top 25 Poll.

In the span of seven seasons, Cutcliffe led Duke to six bowl games; the Blue Devils were victorious in the final three postseason matchups, too. It’s the most successful stretch of time in program history. Overall, Cutcliffe is 77-95 (.448) during his time at Duke.

While the end may be near, Cutcliffe’s success in Durham and reputation as a strong leader are undeniable.