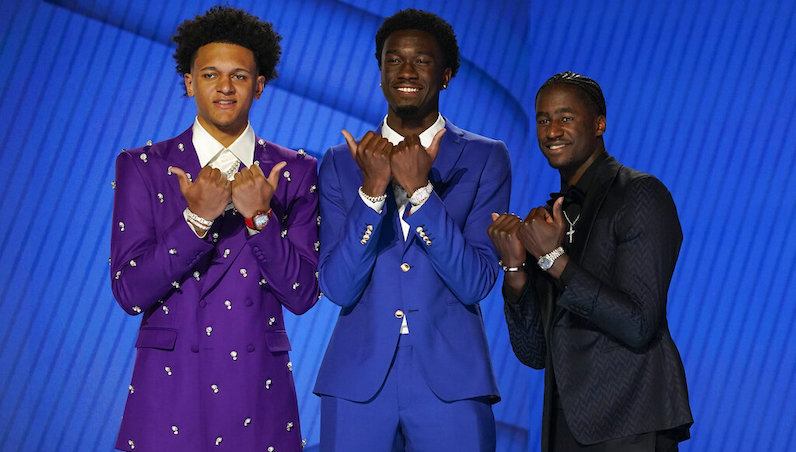 The 2022 NBA Draft started with a bit of a bang. After weeks of speculation, with Orlando projected to select Auburn’s Jabari Smith with the No. 1 overall pick, the Magic flipped the script. Instead, Orlando drafted Duke power forward Paolo Banchero with the No. 1 selection.

Ultimately, the ACC finished with six first-round draft picks, including several of Banchero’s teammates at Duke. That’s a few short of the record 10 first-round picks the league had in both 2017 and 2019; however, it’s the most of any conference for the 2022 cycle.

No one had more Round 1 draft picks than the ACC! #NBADraft pic.twitter.com/OAieUBIKeZ

With four players selected in the first round, 2022 Duke is the most recent team to have four player go in round one. The first team to accomplish that feat was 1999 Duke — 23 years ago. Back in 1999, those four players were Elton Brand, Trajon Langdon, Corey Maggette and William Avery.

Duke is now the most recent to do so, this year — Banchero, Williams, Griffin and Moore.#DukeMBBStats

Throwback to when @TrevorKeels dropped 25 at MSG. 7 months later he’s a Knick. pic.twitter.com/Dxr2L8bG3p

Keels was taken in the second round by the New York Knicks with the No. 42 pick.

Of the seven ACC players drafted, four were rookies: Banchero, Griffin, Wesley and Keels. Williams and Moore were the only two players on ACC rosters in each of the last two seasons to get drafted. (Former North Carolina center Walker Kessler, who played for Auburn this past season, was drafted No. 22 overall by Minnesota.)

6.5 months later, Jake LaRavia is a Top 20 NBA Draft selection. What a rise. Props to LaRavia and Wake Forest's staff, which did a wonderful job empowering LaRavia to find himself as a monster two-way player in the ACC https://t.co/efGJyg6gkX

After two seasons with Indiana State, LaRavia transferred to Wake Forest; quickly, he emerged as a gifted two-way playmaker, empowered by an excellent coaching staff, led by Steve Forbes.