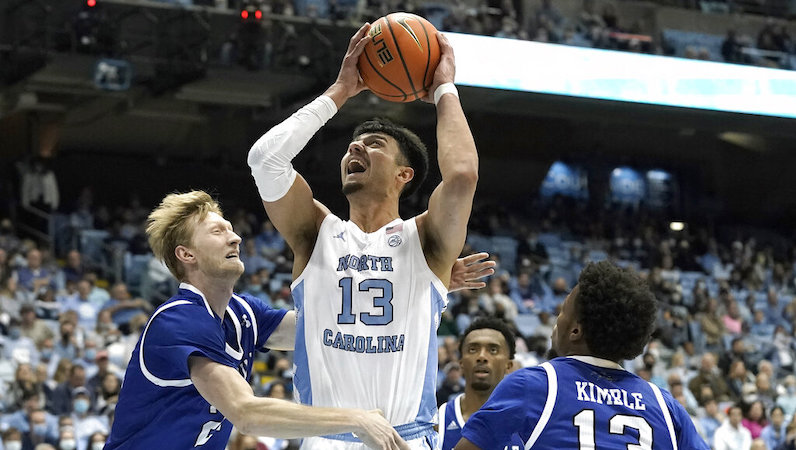 Dawson Garcia is back in the NCAA transfer portal. This time, though, Garcia is set to depart the North Carolina basketball program.

After testing the NBA Draft waters in 2021, Garcia decided to return to college basketball; however, the 6-foot-11 lefty also planned to leave Marquette, where he spent his freshman season (2020-21). Garcia committed to UNC in early July. This move formed a talented frontcourt trio along with Armando Bacot and Brady Manek, another transfer.

Dawson Garcia has entered the transfer portal. He played 16 games at North Carolina.

Please share your favorite memories of Garcia in a #UNC uniform.

Early on in the 2021-22 season, Garcia was a major contributor for first-year head coach Hubert Davis. Garcia appeared in 16 games, including 12 starts. Despite missing two games due to a concussion, he averaged 9.0 points, 5.5 rebounds and 0.7 assists per game. Garcia shot 37.5 percent on 3-point attempts, 41.7 percent on 2-point attempts and 79.2 percent from the line. Garcia scored 20+ points three times this season.

However, following back-to-back road losses in January — Miami and Wake Forest — Garcia left the program. He returned home to Minnesota (Jan. 24) to help his family tend to medical issues.

One moth later, the university released a statement, which stated that Garcia would miss the remainder of the season. According to Garcia, his grandmother was in the ICU, plus his dad suffered a health scare back in December, too. More from Garcia:

I cannot thank everyone enough for the unbelievable support that has automatically been given to me while I flew home to support my family,” Garcia said in a school release. “Not everyone will understand, but those who know our family are very aware of the circumstances and challenges we are facing. As much as I love this University and basketball, being in the middle of a health crisis is where our family is right now and it’s where I need to be

Minus Garcia, North Carolina lost one of its most talented players and a key piece of frontcourt depth. Down the stretch of the season, though, UNC found its identity by leaning in on its starting/primary five and going all-in on the Manek-Bacot hi-lo partnership.

Elsewhere on the roster: Any impact on Kerwin Walton?

It’ll be interesting to see what, if any, impact Garcia’s decision has on Kerwin Walton. Both players hail from the state of Minnesota. The two players worked out together last offseason, too.

During a sensational freshman season, Walton emerged as one of the best shooters in the ACC; he was an offensive lynchpin for UNC in the 2020-21 campaign. Unfortunately, Walton dealt with injuries this season, along with a reduced spot in the rotation. Hubert Davis elected to start with RJ Davis and Caleb Love this season, a de facto double point guard lineup, which pushed Walton to the bench.

UNC with RJ Davis/Love/Leaky/Manek + Bacot on the floor, per Pivot Analysis: +269 in 575 minutes

According to Evan Miya's data: this is now the most-played lineup in the ACC this season

A look at the team 7 lineups in the ACC (300+ possessions) in terms of adjusted efficiency pic.twitter.com/lxztS5JIhH

His defensive lapses made it tough for him to push for more minutes, although Love seemed to have more leeway for some of his own foibles on defense. Regardless, Walton connected on 35.4 percent of his 3-point attempt (65 3PA) this season. That’s a decent number, but it’s down from a year ago, in both volume and efficiency. The confidence just wasn’t there. As a freshman, Walton drained 58-of-138 3-point attempts (42.0 3P%).

Down the stretch of the season, Walton didn’t play vs. a handful of opponents, including two overtime games: Duke (twice), Syracuse, Baylor, UCLA and Kansas. Walton played only five total minutes in the NCAA Tournament.

Other aspects of his game slipped, too. Walton shot 40.5 percent on 2-point attempts, down from 52.5 percent last year. He recorded only 13 assists in 31 games.

North Carolina’s staff could sell Walton on an increased role next season; however, it seems likely that Walton could also look elsewhere for playing time and a fresh start.