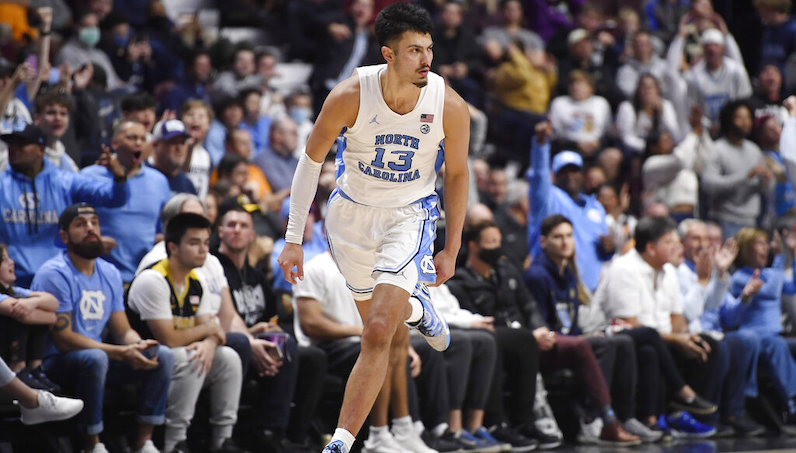 Sophomore forward/center Dawson Garcia will miss the remainder of the 2021-22 season for North Carolina. Garcia returned home to Minnesota last month to help tend to a family medical issue.

According to a release from the university, Garcia started that his grandmother is in the ICU. His dad suffered a health scare back in December, too. More from Garcia:

I cannot thank everyone enough for the unbelievable support that has automatically been given to me while I flew home to support my family,” Garcia said in a school release. “Not everyone will understand, but those who know our family are very aware of the circumstances and challenges we are facing. As much as I love this University and basketball, being in the middle of a health crisis is where our family is right now and it’s where I need to be

Garcia joined the program last July — after testing NBA Draft waters. As a freshman, Garcia was productive player for Marquette in 2020-21.

While on the floor, Garcia added another stretch option in the frontcourt for Hubert Davis. He could play with either Brady Manek or Armando Bacot.

UNC’s Dawson Garcia will miss the rest of the season as he helps tend to family medical issues.

Marquette transfer was averaging 9.0 points and 5.5 boards in 16 games this season for the Tar Heels.

Among the trio of big men for UNC, which includes Bacot and Manek, Garcia was the team’s best frontcourt athlete. He’s nimble in space, but also a strong rebounder: 18.2 percent defensive rebound rate.

Garcia’s final appearance for the Tar Heels came back on Jan. 22. North Carolina lost by 22 points in Winston-Salem to Wake Forest; Garcia scored seven points while on the floor for 18 minutes.

Earlier in the season, Garcia missed two games — Virginia and Georgia Tech — after he suffered a concussion two minutes into North Carolina’s win over Boston College.

Without Garcia, a lot falls on the plates of Bacot and Manek. Those two are very good players; they fit well with one another on offense, too, although there are limitations defensively. Beyond those two, however, UNC can try more of Leaky Black at the 4, which has had some success this season.

Over the last six games — without Garcia — Bacot and Manek have shared the floor for a total of 171 minutes, per Pivot Analysis. North Carolina is +41 in those minutes.

This could also lead to so more playing time for Puff Johnson, Justin McKoy or freshman forward Dontrez Styles.