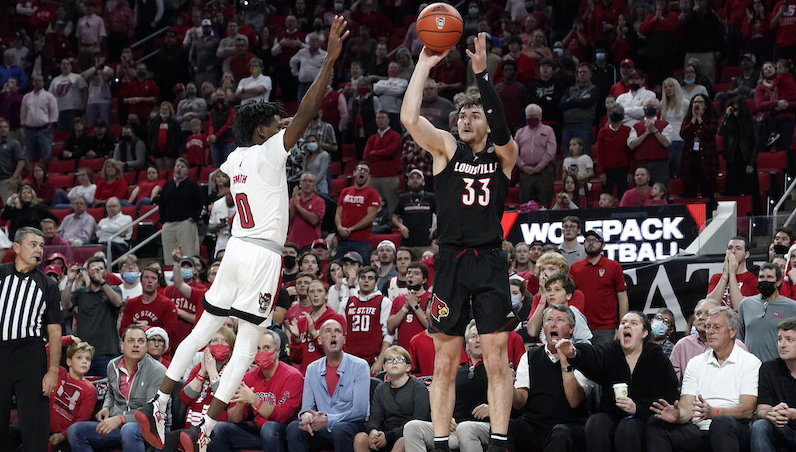 In just his second game back from suspension, Louisville head coach Chris Mack dialed up a brilliant after-timeout play in Saturday’s win at NC State, which proved be to be the game-winner. With two seconds left on the shot clock (30.3 seconds left in the game), Mack draw inspiration from former Butler and Boston Celtics coach Brad Stevens.

Gibson Pyper — of the brilliant @HalfCourtHoops handle on Twitter — had coined this play: “Winner.” It’s an end-of-game/half play on a sidelines out-of-bounds set. There’s a baseline screen/exchange for an off-ball player flowing to the weak-side of the floor (Draymond Green); the inbounds passer will throw the ball over the top to that player. While this happens, another player (Steph Curry) comes off a screen in the direction of the player who just received the initial pass.

Stevens is credited with the genesis of this play; however, dozens of NBA and college teams have dipped into the portfolio to use this set, too.

Dre Davis, who was awesome again today, is tasked with a challenging pass to start the possession. Jarrod West sets the baseline cross screen for Matt Cross. Jericole Hellems, the primary defender on Cross, and Terquavion Smith, a freshman guard, switch the action, on the fly. Smith, however, tries to turn and find the ball in the air; in doing so, he leaves his feet, which helps give Cross a little more room.

Noah Locke, another talented movement shooter comes off the screen from Malik Williams. Instead of passing to Locke — there really isn’t enough time — Cross decides to put his lightning-quick release to work. Cross drains the 3, and Louisville held on to win, 73-68.

This is one of the big differences with Louisville’s roster, compared to last season. Cross and Locke can do damage as off-ball movers and 3-point shooters.

Deep dive on Louisville basketball: why and how the offense struggled this season, despite Carlik Jones + David Johnson — and how newcomers/transfers Matt Cross, Noah Locke + Jarrod West can revitalize a perimeter attack that couldn't make shots https://t.co/BXgu6KDq0F

Here’s another example of “Winner.”