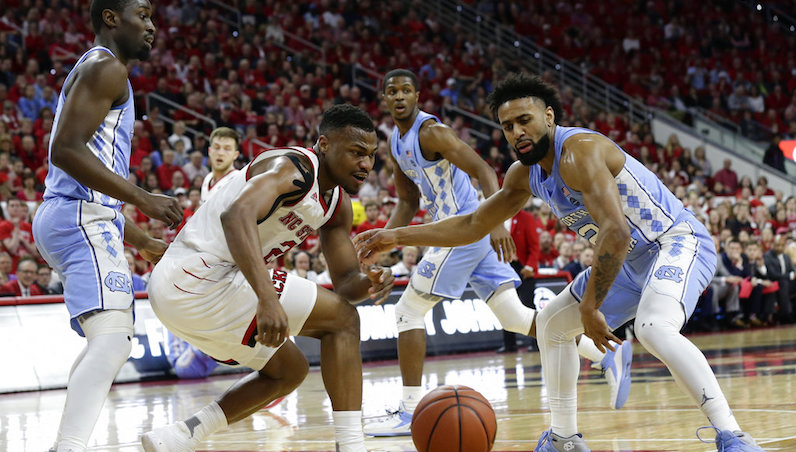 There are several NC State players that have benefitted from the arrival of Kevin Keatts. Markell Johnson is now one of the nation’s top pick-and-roll creators; Omer Yurtseven has evolved into a promising stretch-5 with an NBA future. Let’s not forget fifth-year forward Lennard Freeman, who has turned into one of the ACC’s most efficient paint players, too.

However, the improvement and utility of junior forward Torin Dorn is maybe the most telling. Last March, I wrote on the type of offense that Keatts would bring to Raleigh; a key component of this new system would be the deploy more small-ball lineups that opened the floor for spread pick-and-roll action.

Dorn is a significant part of this transition. Teams can’t play two-way small-ball without a combo forward that can switch defensively, rebound above his size (15.7 percent defensive rebound rate for Dorn) and stretch it out to the three-point line on offense. The Charlotte transfer checks all of those boxes; now, his inside-out play is starting to look a lot like that of what one of his current teammates did last year at Wilmington.

The more, the merrier

Back to 2017-18: Dorn has started all 25 games for the Wolfpack this season; nearly half of those starts (11), have come with only one other big in the starting lineup — either Yurtseven, Freeman or Abdul-Malik Abu.

This role is akin to what C.J. Bryce did for Keatts at UNC Wilmington last season. Ironically enough, Bryce and Dorn are now teammates — after Bryce followed Keatts to Raleigh; next season, those two will share the floor together, too.

In 2016-17, the 6-foot-5 Bryce — the same height as Dorn — played 84 percent of Wilmington’s power forward minutes over the final five games, per KenPom. The remaining minutes at the 4 were used by Chris Flemmings, another 6-foot-5 multi-positional option that vacillated between both forward spots.

Help me, help you

That includes last Saturday’s home loss to North Carolina — an up-and-down affair that saw Dorn play some of the best basketball of his career. Dorn scored 21 points on 15 FGA, recorded three steals and blocked two shots. Dating back to the 2010-11 season — Dorn joined Scott Wood, T.J. Warren and Dennis Smith Jr. as the only other NC State players to record 20 points, two blocks and two steals in an ACC game.

It may seem silly to praise the defensive effort for a player on a team that allowed nearly 119 points per 100 possessions; however, Dorn’s performance is totally praiseworthy. He was outstanding all game long making plays from the weak side and along the baseline. It wasn’t perfect, but his help defense against UNC made a difference.

On the offensive side of the floor: Dorn went 7-of-8 on field goal attempts from the paint, per Synergy Sports. That’s been an efficient area of the floor all season for the versatile Dorn. According to Synergy, Dorn is 61-of-102 on non-post-up attempts at the basketball this season: 59.8 percent, 1.24 points per possessions — 26th in the ACC amongst players with at least 50 possessions.

That type of production at the rim mixes nicely with a three-point stoke that’s improving. Dorn doesn’t take many triples, but he’s 11-of-28 beyond the arc in conference play — 39.3 percent, 19th in the ACC. According to Synergy Dorn has an effective field goal rate just under 55 percent on catch-and-shoot attempts.

The first of many

It will be interesting to see how Keatts choses to utilize Dorn and Bryce in 2018-19. Their minutes could be staggered in a way that makes certain that at least one of them is on the floor at all times as the team’s flex forward. However, there will likely be plenty of minutes together on the floor, too, which should give the Pack some added versatility and switch-ability on defense.

Once Dorn leaves, though, this trend may not stop. Bryce has another year of eligibility beyond that. There’s more, though: JUCO commit Derek Funderburk, a former Ohio State signee that played for NC State assistant A.W. Hamilton at Hargrave Military Academy, is a future option in this role, too.

When Funderburk committed to NC State last November, Keatts mentioned as much: “Our whole class has been focused around adding length and versatility, and DJ is a guy we look forward to using at a bunch of different positions.”