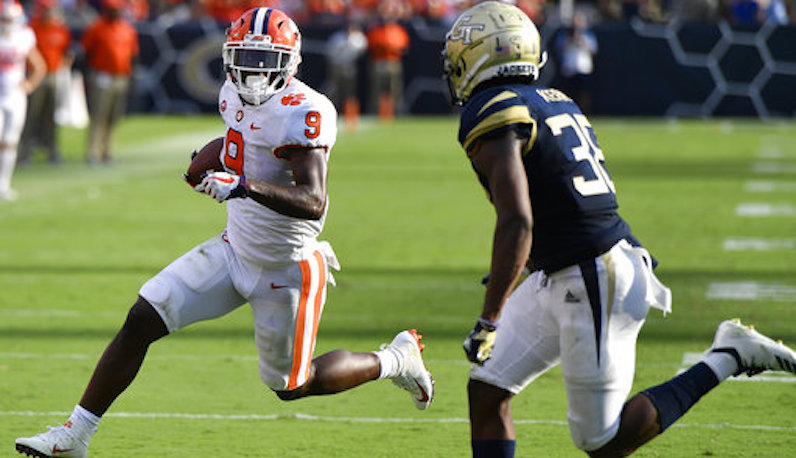 Clemson running back Travis Etienne (9) runs against Georgia Tech defensive back Ajani Kerr (38) during the second half of an NCAA college football game, Saturday, Sept. 22, 2018, in Atlanta. (AP Photo/Mike Stewart)

Travis Etienne burst on to the scene like a comet at the start of the 2017 season. It’s hard to forget that first long touchdown run against Louisville — when Etienne ran through and then past helpless Cardinals like he was Randy Freaking Moss.

Dressed in the same number as Wayne Gallman, Etienne provided a new dimension to Clemson’s offense. And despite the plethora of absurd skill position talent on the roster, it was clear that Clemson needed to find more ways to get the Louisiana native the ball more in 2018.

Well, so far, so good. A note for new starting quarterback Trevor Lawrence: find Travis Etienne and get him the football, a lot.

Etienne has double-digit carries in three of Clemson’s four games this season, including a career-high 16 against Georgia Southern, which went for a career-best 162 yards. The sophomore running back also posted the first three-catch game of his career against Texas A&M. (This is something Clemson can still explore more: Etienne as a receiving threat out of the backfield.)

Currently, Etienne ranks third in the ACC with almost 98 rushing yards per game — behind only two bellwether backs: AJ Dillon and Jordan Ellis. Etienne leads the ACC in yards per carry, too: 8.5 (a top-15 number in the FBS).

For the season, Etienne has 46 carries for 392 yards and five rushing touchdowns; he’s one of only five FBS players with 40-plus carries that’s averaging at least eight yards per carry.

According to Football Study Hall, Etienne currently has an Opportunity Rate of 67.4 percent. That’s a huge tip of the hat to his offensive line; it also means that over two-thirds of his carries have gone for at least five yards.

However, the next level of the field is where he can be really special. Etienne is averaging 7.1 Highlight Yards per Opportunity, per Football Study Hall. This means once the offensive line has done its job — and created five yards of running real estate for Etienne — he averages an additional 7.1 yards per carry. It’s also in line with his freshman year numbers: 7.5 Highlight Yards per Opportunity.

But there’s still role for Etienne as a pass-catcher in this offense. According to Football Study Hall, he’s caught four of his five targets so far this season.