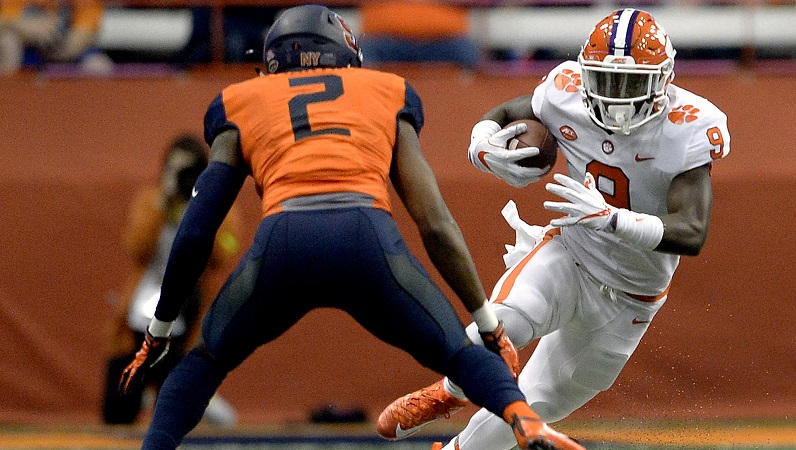 The start of the college football season is a little under two months away; however, with conference media days on the horizon, it’s time to start looking ahead at potential breakout candidates for 2018.

To label Travis Etienne as a breakout player is probably misguided; he burst on the scene quickly as a freshman in 2017. In Clemson’s third game last season, a dominant win at Louisville, Etienne ripped off an 81-yard touchdown run that announced: “I’m here.”

Chucky Williams, No. 22, had a shot at Etienne. The freshman, however, had other ideas — breaking free from the would-be tackler and lighting the field on fire. This type of play became par for the course for Etienne, who ran for 766 yards and 13 touchdowns (fourth most in the ACC). Etienne, according to Pro Football Focus, averaged 4.82 yards after contact, which ranks third most amongst returning FBS running backs.

Watch out for Travis Etienne in 2018 pic.twitter.com/msyNT0gNQq

When Etienne collected six or more carries in a game, Clemson was undefeated: a perfect 11-0.

According to Sports Reference, Travis Etienne (107 carries) was one of only four FBS players to run for over 700 yards and 10 touchdowns on fewer than 125 carries in 2017. He was the only Power Five player to hit those benchmarks last season, though. Dating back to the 2000 season, only one other ACC player has accomplished this — Karlos Williams, during Florida State’s title season in 2013.

Etienne’s breakaway style of running his something to behold; as a rookie, he racked up 16 carries of 10-plus yards and eight carries of 20-plus yards. Nearly 15 percent of his carries went for 10 or more yards.

As usual, the 2017 Clemson team featured a bevy of playmakers — guys that can cause damage with the ball in space, all over the field. The Tigers coaching staff tried to find additional ways to get Etienne the ball; however, there’s room for growth here, too.

On offense, though, Etienne caught just five passes — for 57 yards — on only seven targets, according to Football Study Hall. Etienne was targeted on less than two percent of Clemson’s pass plays.

Of course, this is a roster with plenty of talent on the perimeter at wide receiver, too. It’s not easy to share the ball, and find an equitable number of touches for each player; but it wouldn’t surprise to see Clemson find additional targets for Etienne and Feaster, especially.

Speaking of Feaster, he’s pretty darn good, too. As as sophomore, Feaster, another track star in Clemson’s backfield, ran for 669 yards and seven touchdowns on 107 carries.

This is a Clemson roster that’s build to win big, and win now. The defense is once again stacked — this time to almost comedic proportions. However, there’s still one question mark: the quarterback position.

Back in the spring, former 5-star recruit Hunter Johnson transferred out from the program, and ended up at Northwestern. Around the same time, Dabo Swinney was remained mostly firm on Kelly Bryant, who was rather productive in 2017, as his starter for 2018. True freshman wunderkind Trevor Lawrence is Bryant’s chief competition.

In the first four weeks of the 2018 season, Clemson will have to play at Texas A&M (sup, Jimbo?) and Georgia Tech. It will be fascinating to see how Clemson and Dabo handle to the QB situation. Again, this team should be all-in on winning a national title this season; the Tigers will go with whomever gives them the best odds.

Regardless of who that is, Travis Etienne and Tavien Feaster will be counted on to take pressure off the pass game, and create those big chunk plays that offenses crave.

What the return of David Skara means for Clemson’s defense