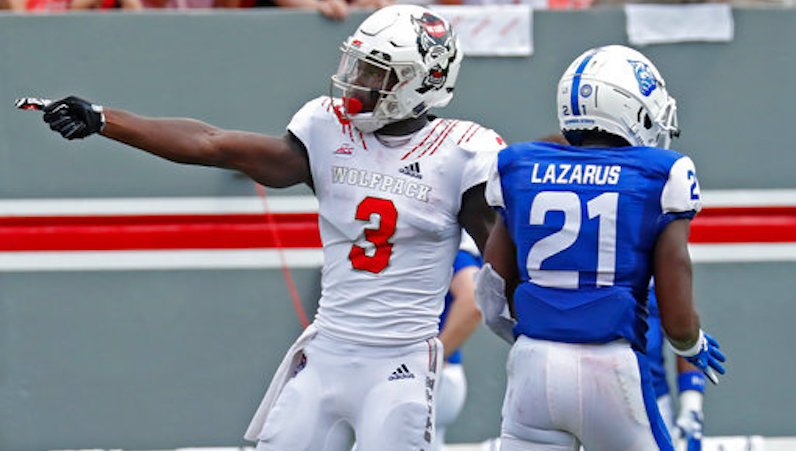 North Carolina State's Kelvin Harmon (3) celebrates after he made a catch against Georgia State's Remy Lazarus (21) during the first half of an NCAA college football game in Raleigh, N.C., Saturday, Sept. 8, 2018. (AP Photo/Chris Seward)

Another game, another featured receiver for NC State. In the opener, Jakobi Meyers lit up the turf at Carter-Finley; a week later, Thayer Thomas, seemingly out of nowhere, went bonkers against Georgia State. As NC State got back on the field for its third game of the season (another 37-20 win over Marshall), though, a familiar name — Kelvin Harmon — did his thing: six catches (seven targets) for 150 yards, all in the first half.

In two career games against Marshall, going back to the 2017 season, Harmon has 15 catches on 17 targets for 271 yards (15.9 yards per target, which is insane). Safe to say, the Thunder Herd will be stoked to never see this dude again.

For the season, Harmon now has 18 catches, on 31 targets (58.1 percent catch rate), for 312 yards. That’s a pretty darn good catch rate, especially when you factor in the types of routes (17.3 yards per catch) Harmon generally runs — vertical, down the sideline.

This is a follow-up to Harmon’s breakout 2017 campaign: 69 receptions on 117 targets (59 percent catch rate, per Football Study Hall) for 1,017 yards and four touchdowns. Ryan Finley does a wonderful job spreading the ball around; currently, seven players on NC State’s roster have at least five receptions; five have at least 10 catches. A season ago, with Finley as the trigger guy, eight players had 15 or more targets, according to Football Study Hall.

Next up for NC State — its ACC opener: Virginia comes to town as an eight-point underdog. This will also mean a matchup between two of the ACC’s best: Kelvin Harmon and UVA’s Juan Thornhill.

Juan Thornhill was targeted 3 times in coverage against Louisville – and did not allow a single reception pic.twitter.com/bDaadv0adZ